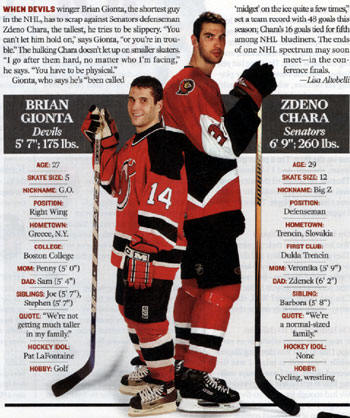 The insanity continues in Montreal, with the Canadiens adding former Devils winger Brian Gionta at an inflated $25M over five season. You could say 20 goal scorers never had it so good!

Gionta of course, rode shotgun to newly acquired Canadiens center Scott Gomez for a few season in the Jersey swamps, notching 48 goals in 2005-06. GM Gainey is obviously hoping their chemistry is rekindled in Montreal.

It will be interesting to watch this Canadiens new soup to nuts lineup gel. Hopefully some familiar faces will be returning, but with each signing it is looking less and less unlikely.

Here are Gionta's stats from Hockey Database, and his bio from Legends of Hockey. 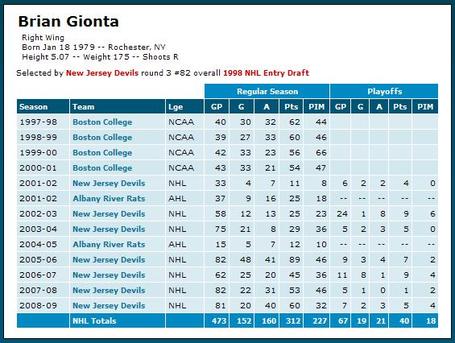 Brian Gionta was born January 18, 1979 in Rochester, N.Y. The 3rd round choice, 82nd overall selection of the New Jersey Devils in the 1998 NHL Entry Draft, Gionta is a graduate of the Boston College Screaming Eagles.

The diminutive forward from Rochester, N.Y. spent two seasons in the Ontario Junior Hockey League with the Niagra Scenics capturing Metro Junior Player of the Year honours in 1996 before joining Boston College in 1997-98.

In his four seasons at BC, Gionta finished with 232 points (123 goals, 109 assists) in 164 games and was the recipient of numerous individual honours.

Coming off back to back seasons of 60-plus points, Gionta entered his junior year at BC and continued where he had left off finishing second in the nation in goals with 33 and earning Hockey East First Team All-Star honours and NCAA East First Team All-American honours and was a finalist once again for the prestigious Hobey Baker Award.

On the international stage, Gionta is a two-time member of the US World Junior Team (1998-1999) and a three-time member of the US World Championship Team (2000-2001, 2005), and has represented the US at the 2006 Winter Olympics. The recipient of the Bob Johnson Award in 1999 in recognition of excellence in international ice hockey competition during a specific season, Gionta made his professional hockey debut in 2001-02, splitting his season with the Devils and their AHL affiliate in Albany. Despite a lack of size, Gionta became a regular with the New Jersey Devils in 2002-03 and played a key role in the team's successful quest of the Stanley Cup, contributing 9 playoff points.