Share All sharing options for: Mike Cammalleri the newest Hab 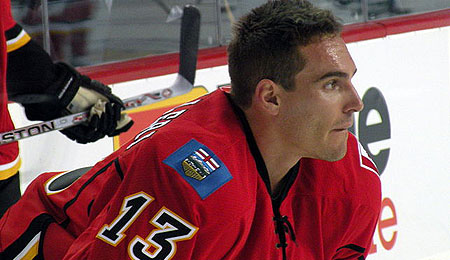 The Canadiens have landed a top line goal scoring center. While Mike Cammalleri is but 5' 9'' tall and 180 lbs, he packs some punch. A player in constant progression, Cammalleri scored 39 goals with Calgary last season. One of the younger free agents available at age 27, Cammalleri has signed on for five seasons at $6M per year. Below are the player's statistics from Hockey Database and his bio from Legends of Hockey. 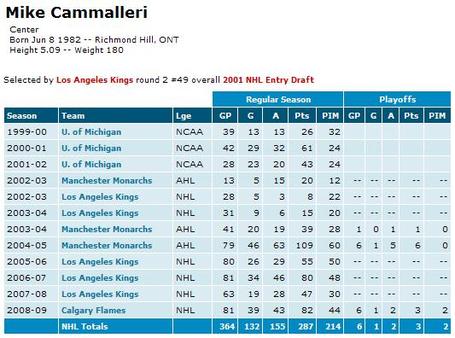 Mike Cammalleri was born June 8, 1982 in Richmond Hill, Ontario. The second round choice, 49th overall selection of the Los Angeles Kings in the 2001 NHL Entry Draft, Cammalleri played collegiate hockey at the University of Michigan.

Following three stellar years at Michigan, Cammalleri decided to forgo his Senior year and sign with the Kings. In his first professional season the former Wolverine played in only 41 games, 28 of those games with Los Angeles and 13 with the team's AHL affiliate in Manchester. After tallying 20 points in 13 games in the AHL Cammalleri joined the Kings and saw his season come to an end after suffering a concussion.

On the international stage, Cammalleri captured a gold-medal representing his homeland at the 2007 World Championships.