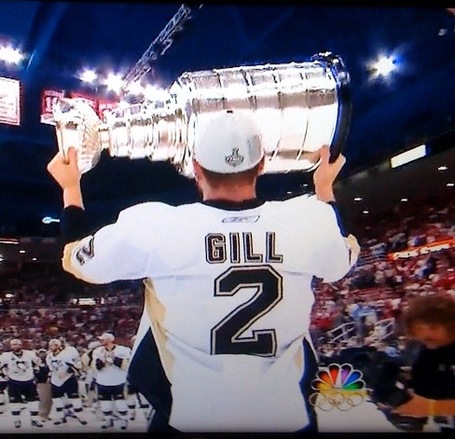 Montreal have signed a second defenseman within an hour today, adding the towering Hal Gill from the Cup Champion Pittsburgh Penguins. Gill is signed at $4.5 for the next two seasons. The signing of Gill pretty much rules out the return of Mike Komisarek to Montreal.

Gill is a 6'7'', 250 lb lumberjack of a defenseman, who has over 800 career games under his belt with the Boston Bruins, Toronto Maple Leafs, and the Penguins. Here are Gill's statistics courtesy of Hockey Database and his bio from Legends of Hockey. 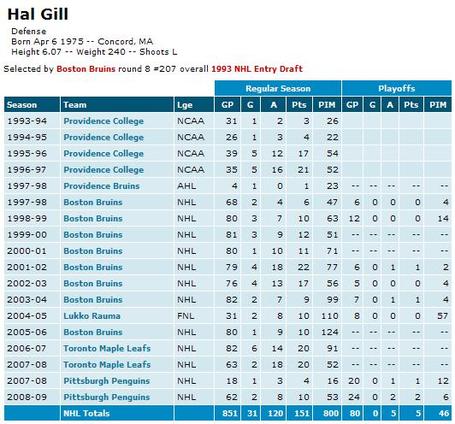 Born in Concord, Massachusetts, Hal Gill was drafted 207th overall by the Boston Bruins in the 1993 NHL Entry Draft after a fine career at Nashoba High School where he was also a highly regarded football quarterback. Gill then spent four years at Providence College and won an NCAA title in 1996 before making his NHL debut in 1997.

The hulking defenceman split his first professional season with the Bruins and their AHL affiliate in Providence. Since entering the league, Gill has been a work horse on the Bruins blueline and is one of the most reliable and durable defensive players on the club.

Following Gill's eight seasons with the Bruins the defenceman was signed as a free agent by the Toronto Maple Leafs in the summer of 2006. As a Maple Leaf, the stay at home defenseman competed in all 82 games of his first season with the club and led the team's penalty killers in ice time. He proved to be one of the most durable players the following year on a club that was full of injuries throughout the 2007-08 season. The Leafs struggled during Gill's second season and opted to trade the hulking defenseman at the NHL trading deadline on February 26, 2008. The trade sent Hall Gill to the Pittsburgh Penguins for a second-round pick in the 2008 and a fifth-round pick in the 2009 Entry Draft.

In 2009, in a 7-game epic Stanley Cup Final, the Penguins would dethrone the Red Wings and earn the franchise's third Stanley Cup title.

Gill's strong defensive play was a key contributor to the Penguins success. His plus 8 rating was tops among Pittsburgh defensemen and he was frequently used to shut down opponent's top scorers.

On the international scene, Gill helped the U.S capture a bronze medal at the 2004 World Championships in Prague, Czech Republic and overall has represented his homeland four times at the Worlds'(2000, 2001, 2004 and 2005).