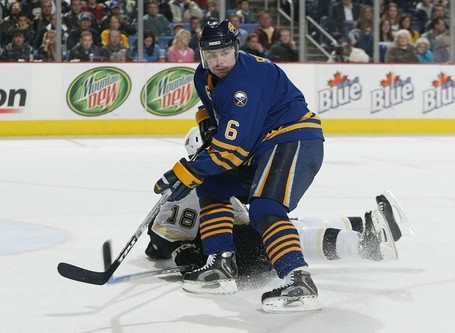 Montreal have added depth and experience on defense with the signing of Jaroslav Spacek for the next three seasons. The contract is said to be for $11.5M over that term.

Spacek is described as a puck moving defenseman, but has also been known to play with a certain edge. Over the past two seasons with the Buffalo Sabres, Spacel combined 14-39 53 totals in 125 games. He was +27 while adding 104 penalty minutes.

Spacek previously played with the Florida Panthers, Columbus Blue Jackets, Chicago Blackhawks, Edmonton Oilers and Buffalo Sabres. The 35 year old Czech born blueliner is listed at 5' 11'' and 198 lbs. Here are his statistics courtesy of Hockey Database, followed by his bio from the Legends of Hockey site. 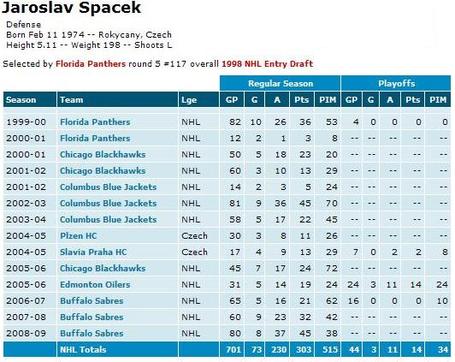 Born in Rokycany, Czechoslovakia, Jaroslav Spacek starred for ZKZ Plzen for several years before joining Sweden's Farjestads in 1997-98. He was selected 117th overall by the Florida Panthers in the 1998 NHL Entry Draft and played 63 games as an NHL rookie the following year. In 1999-00 he scored ten goals and averaged nearly 23 minutes per game.

An offensively skilled defenceman with a hard shot from the point, Spacek was sent to the Chicago Blackhawks for Anders Eriksson early in the 2000-01 season. Spacek went on to play parts of two seasons with the Blackhawks before he was acquired by the Columbus Blue Jackets in the latter stages of the 2001-02 season. In his first full season with the Blue Jackets in 2002-03 Spacek established a career high in points with 45 before missing a good portion of the 2003-04 season due to injury.

Following a lock out season in 2004-05, Spacek returned to the Blackhawks in the fall of 2005 before having his rights acquired by the Edmonton Oilers in January, 2006.