Kovalev Close To Re-signing With Canadiens

Share All sharing options for: Kovalev Close To Re-signing With Canadiens 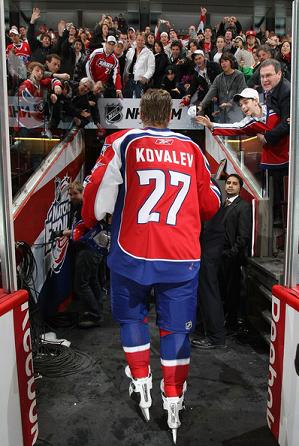 Radio station CKAC is announcing that the Canadiens have come to an agreement with forward Alex Kovalev on a two year deal. The contract would essentially be an extension of his most recent deal, as it would pay him $4.5M in each of the next two season.

The contract has yet to be confirmed by the Canadiens.

Earlier today, CKAC said it spoke with Kovalev's agent, who denied they had turned down a deal for two seasons worth $8.8M. It was said that the agent felt both parties were close to a deal at that point.

TSN is saying there is no deal yet on the Kovalev front.

As of 7:30, it is told that Kovalev is considering similar offers from both the Canadiens and Los Angeles.