How hard is it for a first round pick to win a Stanley Cup?

Share All sharing options for: How hard is it for a first round pick to win a Stanley Cup? 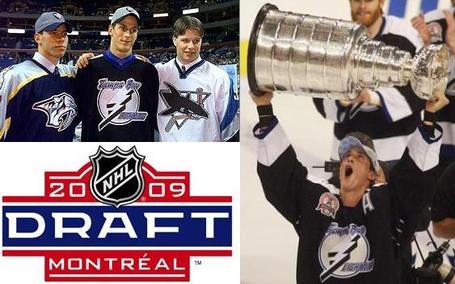 James Mirtle at From The Rink had an interesting numbers crunch this morning, showing just how hard it is for an NHL'er to win the Stanley Cup. In the crunchdown, James' stats show what a small percentage of players playing at least one NHL game get to hoist the 33 pound mug.

That got me wondering, with the NHL draft just weeks away, how many first round picks get to snuggle up to Lord Stanley's chalice?

Since the 1980 NHL Entry Draft, only 74 players out of 642 selected in the first round have gone on to win a Stanley during their career. The total represents 11% of all players selected in 26 drafts from 1980 to 2005 inclusive. In a 30 player round, which has been the format since 2000, that averages out to between three and four players per draft year going on the win the Cup.

As players tend to win the Cup later in their careers - for a variety of reasons - few players drafted in Round 1 since 2000 have won the Cup. In fact, only 6 players taken in that time span have so far won.

Of the 74 Cup winning first round drafted players, only 35 have gone on to win with the organization that drafted them. Even more curious, is that only 4 number one picks have won Cups - Mario Lemieux, Vincent Lecavalier, Mike Modano and Joe Murphy, who won after being traded to Edmonton.

The term franchise player, come draft time, as it turns out, is a misnomer of sorts. The often used term leads one to believe that a franchise and future glory can be built on the back of a complete player. As with many such projections, only time can truly determine whether a talent is a franchise player or not. When a player is selected in the top five of the draft, he is often tagged as a potential franchise building block, but a quick glance states otherwise.

Surprisingly, of 130 top 5 picks in the last 26 drafts, only 29 have gone on to win the Cup. That rounds out to about a 1 in 4 chance, on the surface. While those odds are somewhat better than the 11% ratio, it is revealing to note that only 8 of those 29 won Cups with the clubs that selected them.

Andrew Ladd, currently of the Chicago Blackhawks is most recent first round choice to win a Stanley Cup, which he did with Carolina in his rookie season of 2006.

Here is a yearly breakdown of first rounders who have gotten to raise the holy grail. 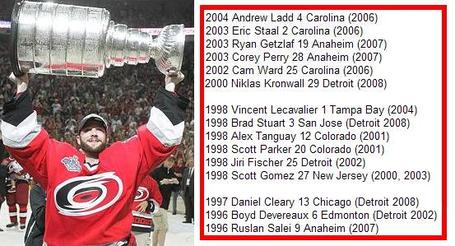 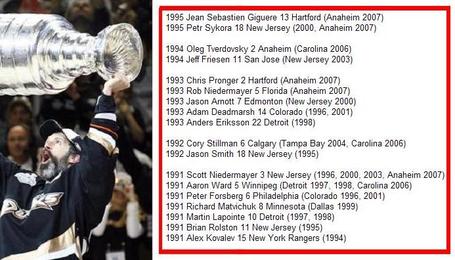 Seven Penguins and one Red Wings could change those totals starting with Game 6 of the 2009 finals tonight and they include: