Following a modest 23 point rookie campaign, questions raised on how improved Guelph Storm centerPeter Holland would be in year two were answered quite forcefully, as he sizzled, notching 10 goals and 21 points in his first 19 games. Holland maintained the pace and grew into an important role with Guelph, rounding out the season with 28-39-67 numbers.

With his gifts of size, a scoring touch, leadership and improving speed and quickness, Holland fits the bill in regard to the Canadiens greatest area of need.

The 6-2, 190 lbs Caledon, Ontario native feels his improvements were largely due to off season work on his skating stride and confidence. The flourishing of his game this year came with added expectations and increased ice time, and he was most impressive in the defensive aspects, as his plus minus improved, going from a -8 to a +10 this season. As a 17 yr old, Holland took on a leadership role both on and off the ice. Rather than crack under the added expectations, Holland relished and prospered due to the opportunity.

"When you’re faster the game is a lot easier. You have more time for yourself. Ever since minor hockey, I’ve had some pretty decent hands. Getting good passes and incorporating my hands into that, has really got me some better scoring opportunities and shots," said Holland. 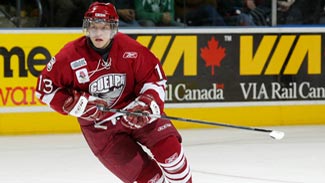 Guelph Storm coach Jason Brooks feels that Holland is working very hard on improving all aspects of his game.

"His greatest attribute is he is so committed. He wants to be a player. He works at his game. He works hard at getting stronger. He does all the little things. He watches a lot of video of himself of how he can improve his game. I think that is his greatest asset because he’s a good skater, but he wants to be a better skater. He’s a good scorer and he works on his shot. He wants to work on all the little intangibles that make him that much better," Brooks said.

Teammate and Detroit Red Wings first round pick G Tom McCollum sees a definite evolution in Holland’s game and thinks he is a special talent.

"I think that Peter is a fantastic player. He has great speed and he handles the puck well and has a great nose for the net. I think that he has progressed from last year in that this season he looks to make the simple play and has learned to use his line mates to his advantage," said McCollum. 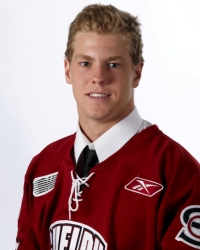 For more on Peter Holland, check these links: