2009 Draft Targets: Louis Leblanc is an ideal centreman for Canadiens on draft day

Share All sharing options for: 2009 Draft Targets: Louis Leblanc is an ideal centreman for Canadiens on draft day

The nomination of Jacques Martin as Canadiens coach last Monday stole some limelight away from the team's mini - combine for prospects held in Brossard the following day. Up to forty draft hopefuls were put through the paces before the watchful eye of Canadiens scouting director Trevor Timmins, in what represents an additional and unique opportunity for players to leave a strong impression on the team three weeks prior to draft day. With half the group coming from the QMJHL ranks, the three hours spent in Brossard for some could well mean the first step towards a dream come true

"Coming from the province of Quebec, and getting to experience some of what players live through here daily, makes it a very special experience," explained Jordan Caron.

Prospect Simon Despres added, "Living in the Montreal region, as a Canadiens fan, I have to say that it's a nice feeling to be here today."

If there is one player who has stirred much talk and interest here, it is center Louis Leblanc, a former Montreal native. Leblanc played last season with the Omaha Lancers of the USHL, a league equivalent to a junior circuit in Canada. Blessed with strong skating skills, Leblanc is ranked 13th among North American skaters. He was the Quebec midget AAA's leading scorer in 2007-08 before taking his game stateside.

In speaking with Timmins, one become quickly aware that the scout has his eyes set upon him. Timmins is not indifferent to the fact that by the Canadiens 18th rank Leblanc could still be there for the taking.

"You have to appreciate the way Louis carries himself on the ice", noted Timmins."He's intense, and can score goals. There is work needed in some areas, but he is a player with many qualities."

"I grew up watching the Canadiens, so being here today in front of them is very motivating", Leblanc offered."I enjoy working offensively as much as I do defensively. I'm a strong skater with good hands."

Last season with Omaha, Leblanc posted 59 points in 60 games, numbers equivalent to those of Max Pacioretty at the same level just over two seasons ago. His plans are to head to Harvard this fall, while his Quebec league rights are owned by the Chicoutimi Sagueneens.

Timmins joked that he wished he had crystal ball vision, but noted that "if Leblanc were available come the Canadiens turn, he would be hard to pass up."

Time will tell how many among this group of players could be selected by Montreal come the weekend of June 26. In a worse case scenario for players, those not chosen by an NHL team could very well have left an impression that finds them invited to rookie camp in September, with a free agent offer to follow.

Leblanc was the only midget player to be invited to the U-18 National Camp in 2008. His play has been described as "a gritty style that has caught many scouts’ attention. He loves to play in front of the net and crease area where he nags the goaltender and draws penalties." 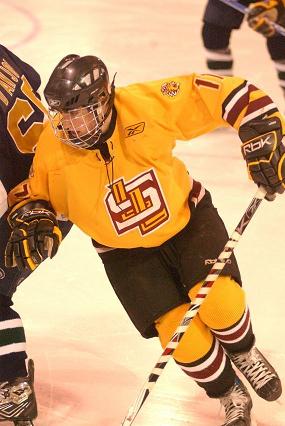 For more on Leblanc, here are a few articles on the player, followed by a clip from his midget AAA days:

For more info on the Canadiens draft, check out their combine and the draft process.