Share All sharing options for: Canadiens Not For Sale....In 1932! 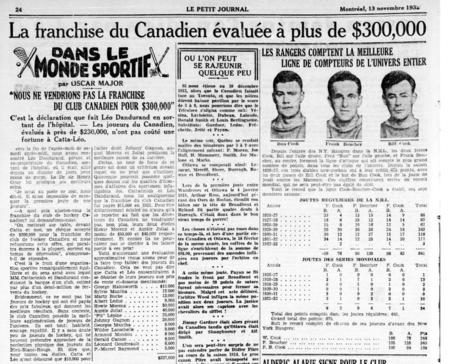 I found the page you see above while researching the 1932-33 season at the Quebec National Archives and Library site's pages for Le Petit Journal.

Back in November of 1932, then Canadiens owners Leo Dandurand and Joe Cattarinich claimed they would not sell their club for $300,000 in the midst of the Depression, if offered the money.

Two years earlier, in 1930, they had turned down an official offer of $600,000 by an unamed American consortium.

Dandurand, Cattarinich and Louis Letourneau, a group known locally as the Three Musketeers, had originally purchased the Canadiens in 1921 from the widow of previous owner George Kennedy for what was then termed a ridiculous sum of $11,000. By 1930, with the Great Depression looming, Dandurand and Cattarinich bought out Letourneau's share for $150,000.

When speculation arose in 1932 that the team were for sale, their claim was heartily denied by Dandurand.

"If someone were to place a certified cheque for $300,000 on the table, in front of Catta and I, for the Montreal Canadiens franchise, we would refuse what many would call this enournous offer, especially in Depression times."

Le Petit Journal accompanied Dandurand's quote with a tally of the teams player's value on an open market and came up with a sum of $227,000. With Howie Morenz and Aurele Joliat topping the list at 50 and 40 grand respectively, the paper stated that the well run club, one year removed from consecutive Stanley Cups, would sell off it's player assets as well.

By the end of the 1934-35 season, with Morenz having been traded to Chicago, the Canadiens and Forum co - tenants, the Maroons were bleeding money. During the previous campaign, they had turned down $200,000 from a Cleveland group intent on moving the team to the States.

Finally, in September of 1935, Dandurand and Cattarinich, pounded by monetary losses, caved and sold the team for $165,000. Considering they had bought Letourneau's shares for slightly less four years earlier, it could be said that they missed the boat. 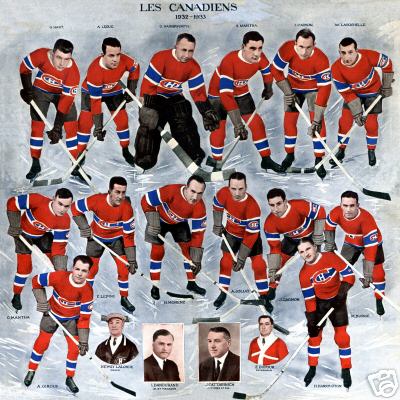 The Canadiens were sold to local businessmen Ernest Savard, Maurice Forget and Louis Gelinas. Over time, it was found out that the trio were simply a front for the Canadian Arena Company, owners of both the Forum and the Maroons, and that the three were simply figurehead minority shareholders.

In the ensuing years, the city of Montreal endured the deaths of Morenz, team captain and coach Babe Siebert, Cattarinich, and the Maroons themselves. The Canadian Arena Company had wanted to rid themselves of the Canadiens in 1938, keeping the 1935 Cup champions Maroons instead - a move vetoed by the NHL from a movement spearheaded by none other than Toronto Maple Leafs owner Conn Smythe.

Smythe reasoned that the league could not suffer the loss of its most distinct, colorful, and successful franchishes, and other league governors supported his claim. As it became more evident with each passing month that the city of Montreal could nil afford two clubs, it would be the Maroons who would be unmercifully terminated at the end of the 1937-38 season.

In 1939-40, after five of the worst seasons in Canadiens history, a power struggle between Savard and the CAC ensued. Savard's shares and controlling interest gave way to the CAC, who brought in manager Tommy Gorman and coach Dick Irvin.

It was said that the Canadiens club had but one asset of any worth after a dismal 10-33-5 season. Forward Toe Blake, aquired from the Maroons in a trivial trade in 1935, had won the scoring championship and the Hart Trophy in 1938-39. He was all the Canadiens had to built upon when Gorman and Irvin took control in 1940.

Irvin, a nine year coaching veteran behind a successful Maple Leafs team, had been snapped up by Gorman after being fired from Toronto. Soon, Irvin's sharp eye for talent spotted the likes of Elmer Lach and Ken Reardon, and the Canadiens turnaround was underway.