Could Redden Be A Habs Blueline Solution?

Share All sharing options for: Could Redden Be A Habs Blueline Solution? 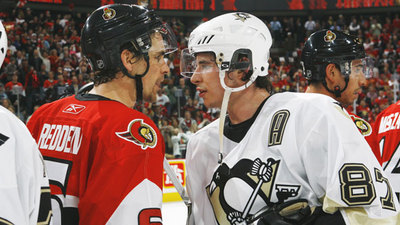 I heard you out loud, upon reading the title of this piece. And yeah, I had to doublecheck my wiring.

I'll cut straight to the chase - there is a rumour (I know, I know) making the rounds that makes all kinds of sense, that the New York Rangers are about to buy out the remaining four seasons of Wade Redden's contract (32.8 over 5 yrs) signed last summer, that raised just about three eyebrows on every face when it was announced.

It was a nutball of a deal that leaves the Rangers on the hook for 24.8 million over the next for seasons, and Redden turns 32 in about a week.

If the tight against the cap Blueshirts want to move forward, buying out Redden, who will take up 6.2 million in each of the next four seasons, is a no - brainer for even a decapitated thinker.

Yes, Redden has looked horrible the past three seasons, but the talent and skill that made him a second choice overall 14 summers ago and a Stanley Cup finalist three seasons back, can't all have disappeared, could it?

Redden had his best years under new Habs coach Jacques Martin. If the Ranger buyout does go through, Redden may just prosper once more in Martin's restrictive system. For the Canadiens, in that scenario, the price could be cheap and the dividends large. It's a gamble worth considering.

The former Senators blueliner, offers an interesting package. He has considerable puck movement skills, skates fluidly, has the size for the position, and brings a wealth of experience. Where he is lacking is in the bark and bite department. He gets into all kinds of trouble when attempting to do too much. If anyone knows how to coach him and get the best out of him, it's Jacques Martin.

Should Redden be willing to accept a two year contract in the neighborhood of 2.5 million per season, Montreal should consider him, as he just might pair up well with Andrei Markov on the PP or with Roman Hamrlik on a regular shift.

It might all rest on whether the Canadiens can retain Mike Komisarek, or become a player in signing UFA's such as Jay Bowmeester or Francois Beauchemin. Montreal are in a position, cap wise, to build a club around Martin's strengths as a coach.

Should the Canadiens start the 2009-10 season with a top four of Markov, Beauchemin, Hamrlik and Redden, would you be comfortable with that?

It is of course, only one speculative scenario, that leaves room for many other options.