The Early and Rare Canadiens Photography of Conrad Poirier

Share All sharing options for: The Early and Rare Canadiens Photography of Conrad Poirier 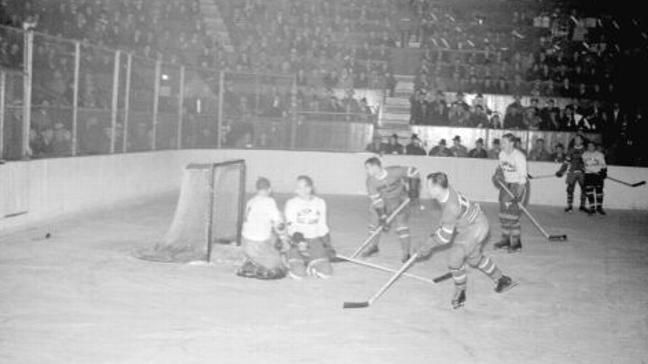 Conrad Poirier was a photographer who snapped thousands of very-well-known photos between 1936 and 1946 from many regions across the province of Quebec. Whether shooting outdoor scenes of children, popular entertainment artists and happenings of the time, or sporting events of the day, Poirier was regarded as an eccentric of sorts, of whom very little is known.

Born in the Montreal region on July 17, 1912, Poirier developed an interest in freelance photography and sold his work to papers such as Le Samedi, La Patrie, La Presse, and the Gazette. By the mid 1930s, Poirier became a sort of avant garde paparazzi type, parading from one public event and spectacle to another, creating a market for his own "new vision" photography. After his passing at age 55 in 1968, his entire works were purchased by cinematographer Guy Cote and brought to the Quebec National Library Foundation.

Luckily for hockey fans and researchers, Poirier captured the Canadiens at the Forum starting in 1937, beginning on November 2, on the event of the Howie Morenz Memorial Game. The hockey images Poirier captures are crude, early shots of the Canadiens from an era seldom seen. Poirier dated each game, and noted the opponent in his works, but rarely identified players by name. Via some statistical data, I've been able to name most with numbers on their backs. 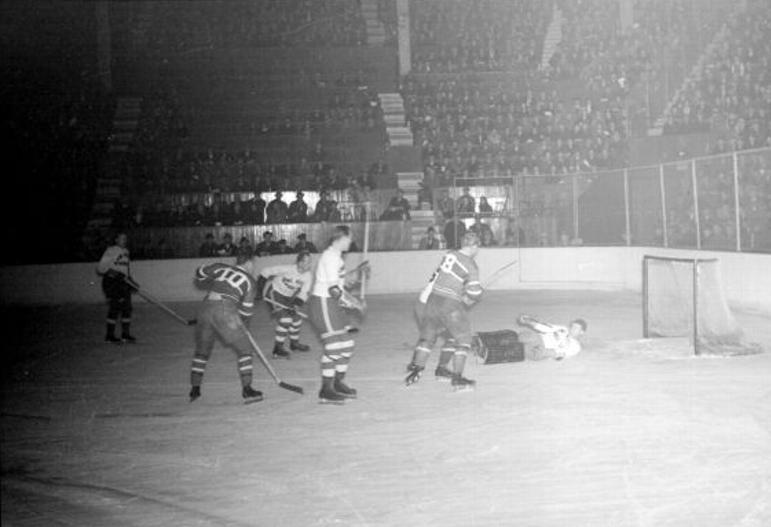 Pictured above, NHL All-Star goaltender Normie Smith of the Detroit Red Wings lays flat on the ice to smother a rebound. Players around Smith in Habs striped jerseys include Walter Buswell (8) of the Canadiens and Earl Robinson (10) of the Maroons. In the photo at the top of the post, the Canadiens Paul Haynes (11) shoots wide on All-Stars' goalie Cecil "Tiny" Thompson (2). 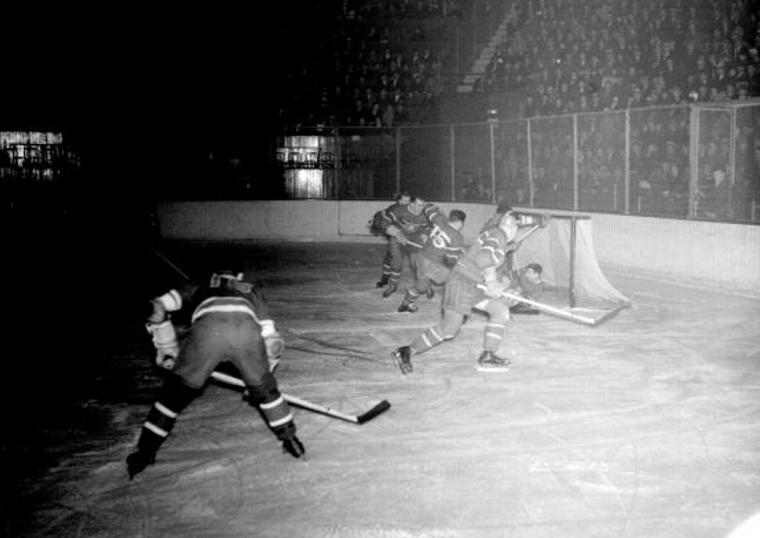 These three photos were taken November 27, 1937 in a 2-1 win over the New York Rangers. Note the similarity between the Rangers dark blue sweaters and the Canadiens' reds. In this shot, Habs goalie Wilf Cude stops a shot from close range and forward Joffre Desilets (15) comes to his aid. 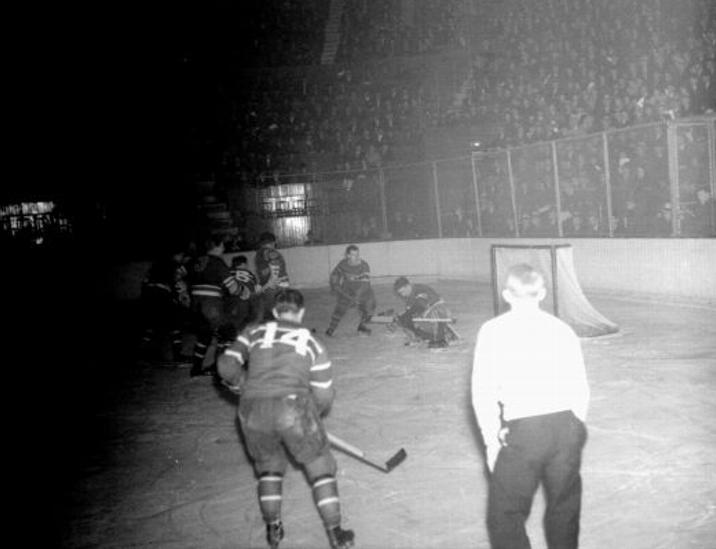 Canadiens Johnny Gagnon, poised for a rebound, as the official looks on. 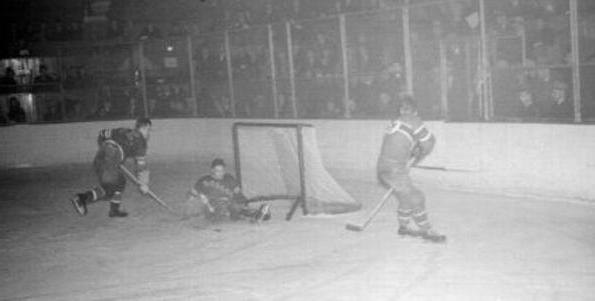 Montreal's Paul Haynes skates past, as Ranger's goalie Dave Kerr makes a save. 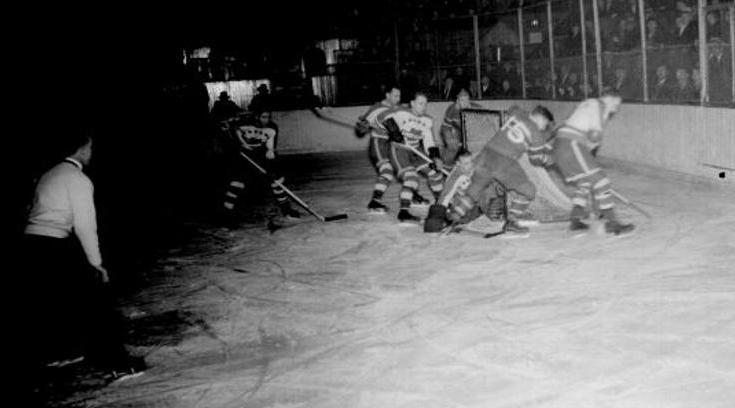 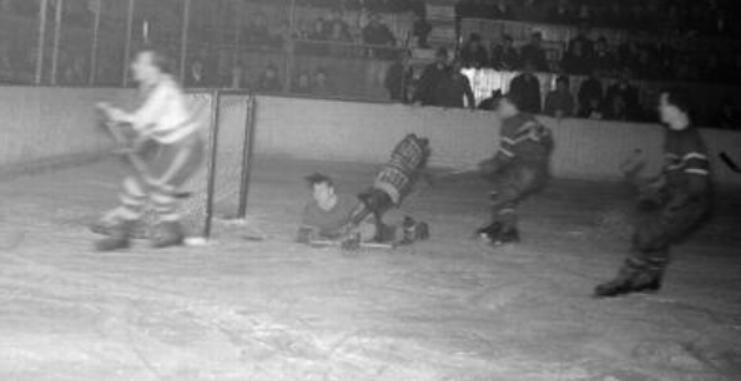 Canadiens' goalie Wilf Cude sprawls during a save as Marty Burke (2) looks on.

Toe Blake (6) is knocked down by an opponent near the Canadiens goal. 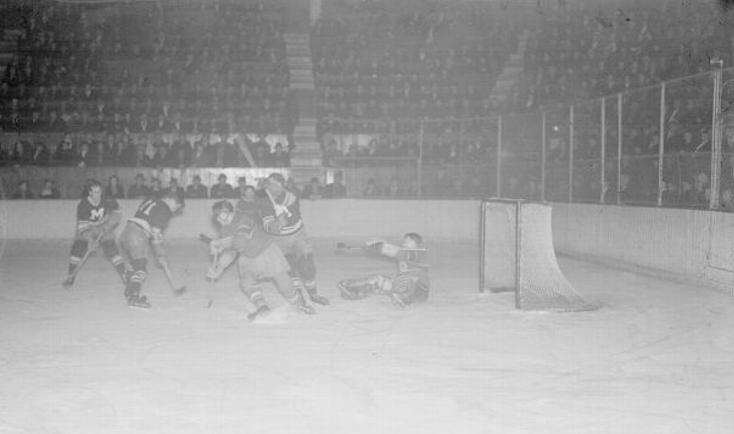 Canadiens goalie Wilf Cude kicks a rebound out as a Maroons player (11) readies a shot on goal. 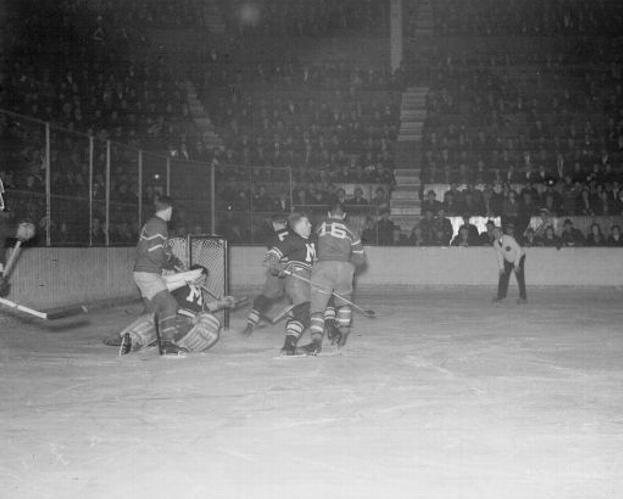 Canadiens forward Tony Demers (16) is barred from the Maroons crease, with goalie Bill Beveridge out of position. 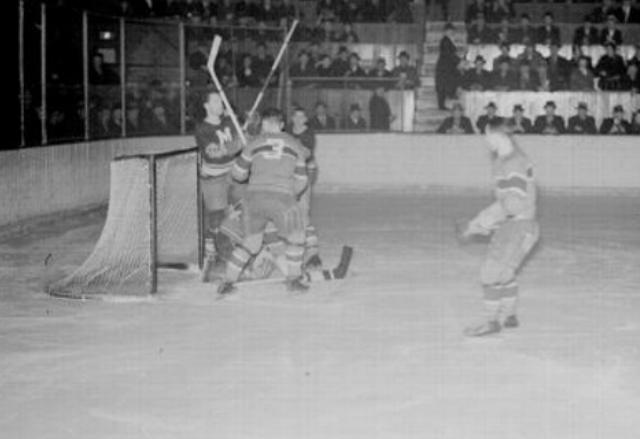 Walter Buswell (3) mixes it up with a Maroons forward as Cude smothers a rebound. 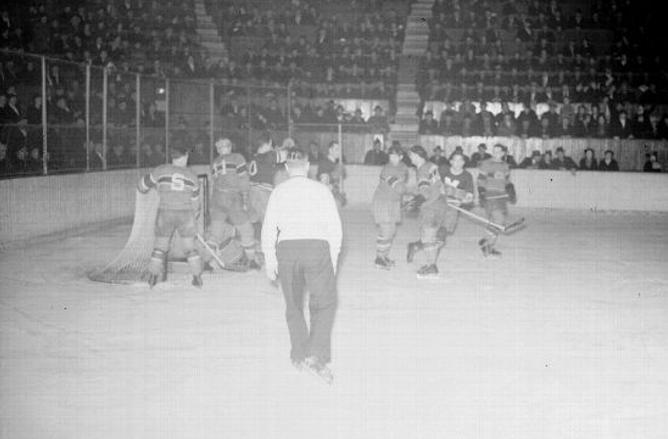 Canadiens' Toe Blake (6) and Cliff Groupille (11) cater to business near Cude. The other Canadiens player in the photo is Georges Mantha (12). The Canadiens won this game in overtime by a 4-3 score. 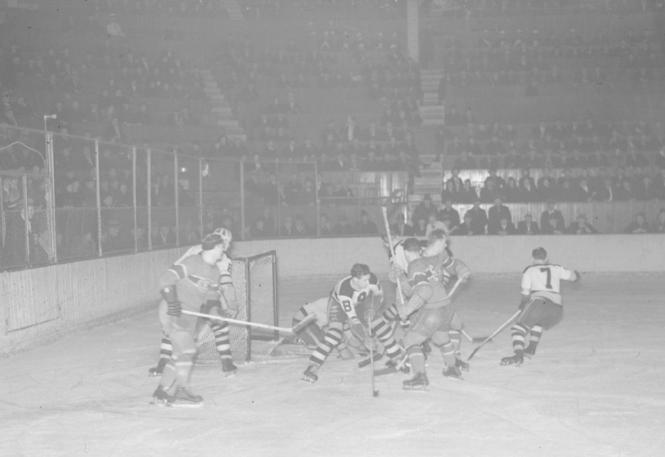 A scramble near the Boston Bruins goal, tended by Cecil "Tiny" Thompson. Leroy Goldsworthy (9) keeps tabs on  the Habs Blake (6) while Ralph "Cooney" Weiland (7) prepares to chase a loose puck. The game ended in a 1-1 overtime tie. The Bruins defenseman at the side of the goal wearing a helmet is Jack Crawford. As legend has it, Crawford was not merely wearing the headgear for protection, but simply to hide the embarrassing fact (as he felt) that he was bald. 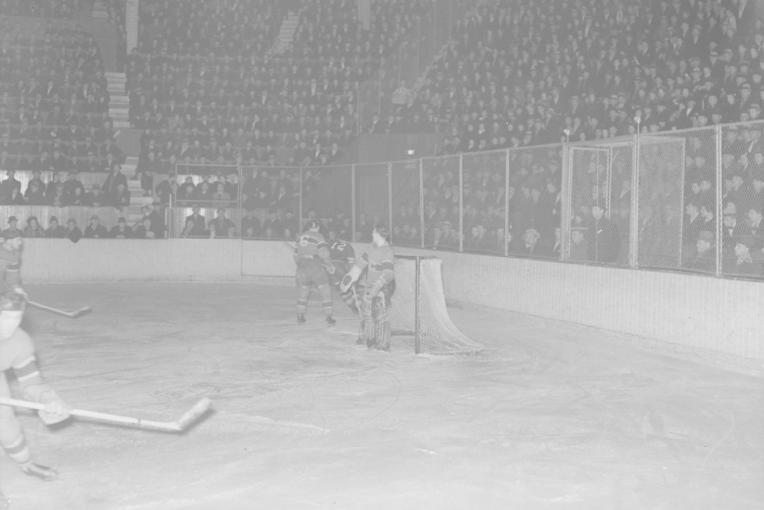 Toe Blake (6) chases the Maple Leafs' Gordie Drillon (12) into the corner boards as goalie Wilf Cude looks on. The Habs were handled 6-3 by Toronto in this game. 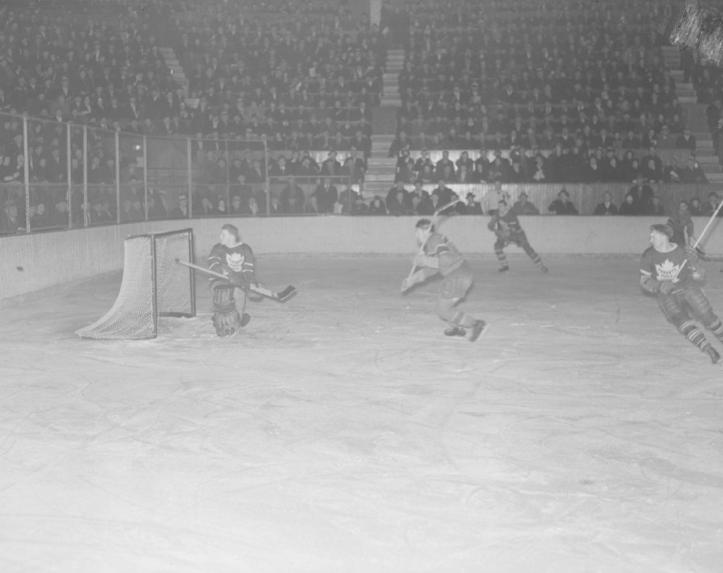 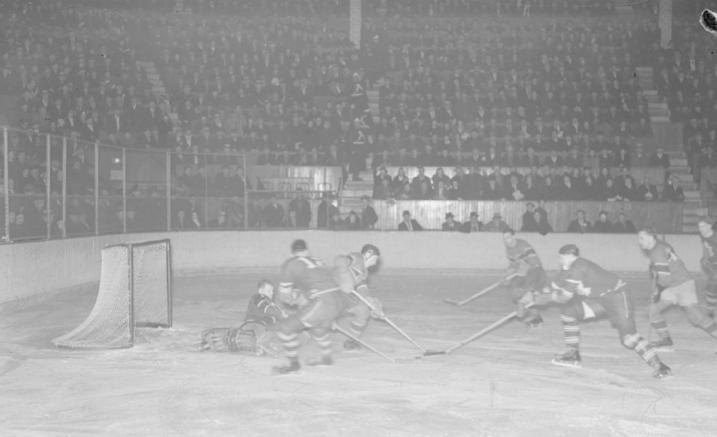 Canadiens goalie Wilf Cude pokes a rebound away from Toronto's Harvey "Busher" Jackson (12). The Canadien player trailing on the play is Albert "Babe" Siebert (1). The reason Siebert wore the number 1 and not goalie Cude, who wore number 17 that season, had to do with Habs legend Georges Vezina. After his death, the Canadiens vowed that only players worthy of Vezina's stature in the game would be awarded his number. Seibert, a Hart Trophy winner the season prior and the Canadiens captain, fell in the "worthy" category moreso than Cude. 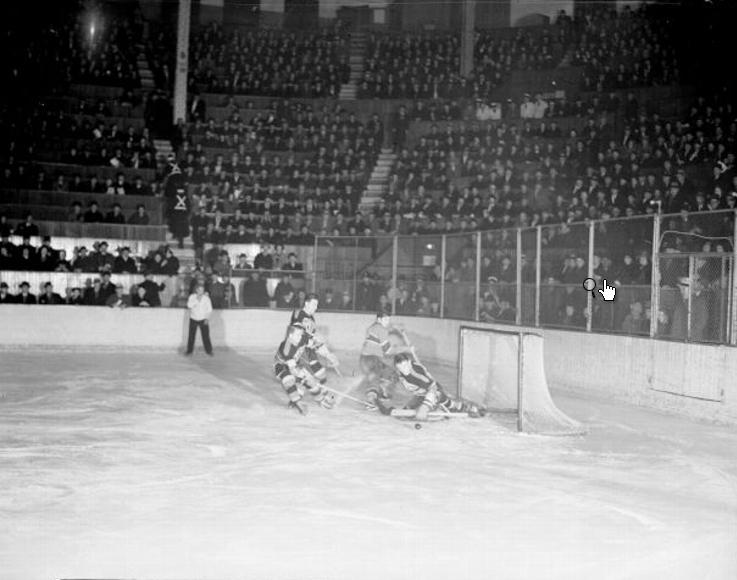 The Canadiens (18-17-13) met the Chicago Black Hawks (14-25-9) in the first round of the 1937-38 NHL playoffs. Montreal finished in second place in the Canadian Division while Chicago clinched third place in the American Division on the final night of the season. In Game One of the series, Montreal would go on to a 6-4 win over the Hawks. Here, Chicago goalie Mike Karakas makes a blocker save off an unidentified Canadiens player. 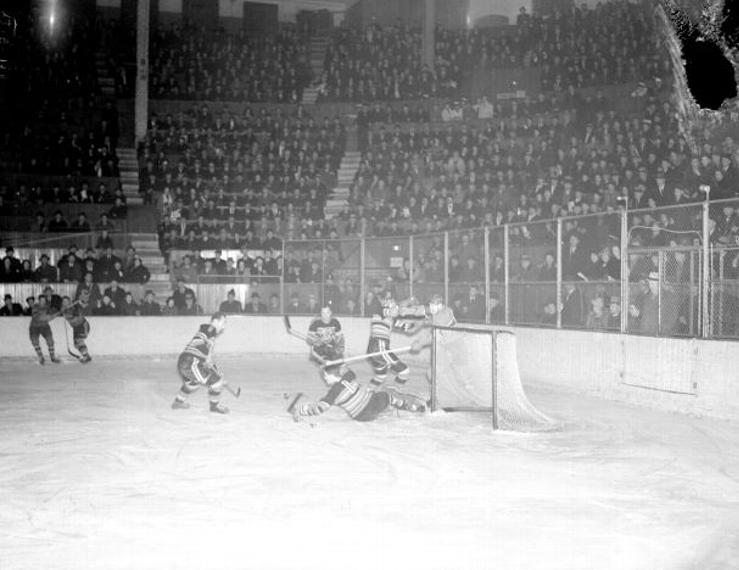 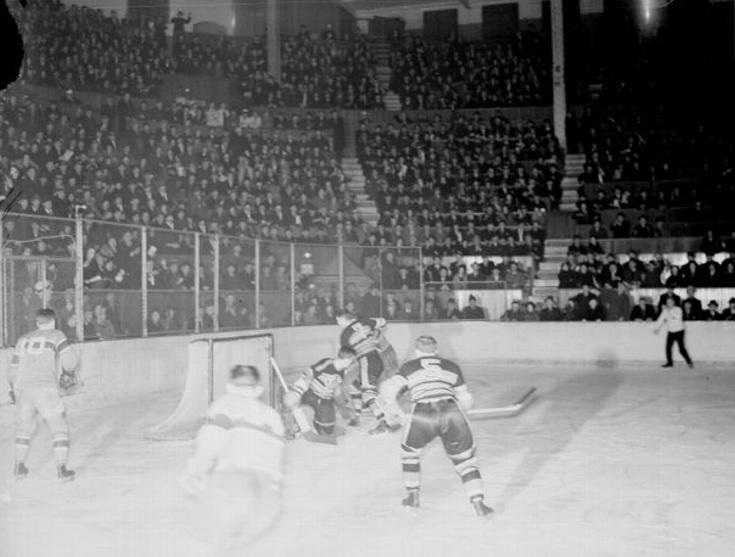 Habs players Paul Haynes (10) and Johnny Gagnon (14) skate towards a crease scramble near the Chicago goal. 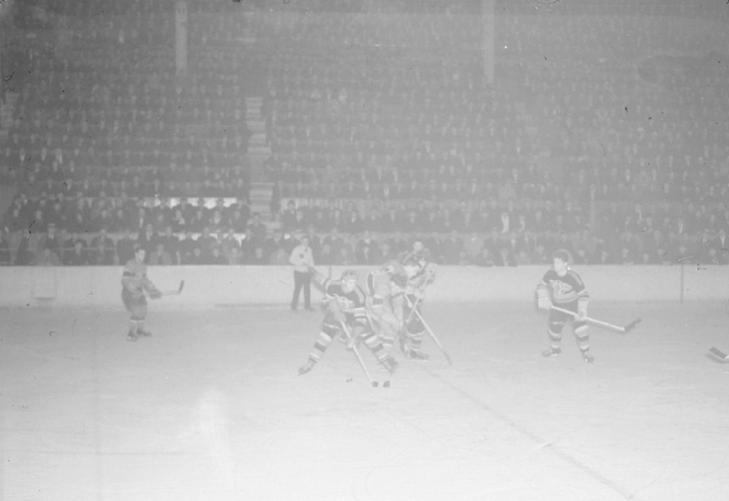 Unidentified Canadiens and Black Hawks players battle it out near the Montreal blueline. After losing Game One, the Hawks shut out the Canadiens 4-0 in Chicago. As the club owning the weakest record of all six teams entering the playoffs, the Black Hawks would go on to upset Montreal 3-2 in overtime in Game Three, and proceed to confound all experts by winning the 1937-38 Stanley Cup, despite their weak regular season showing. 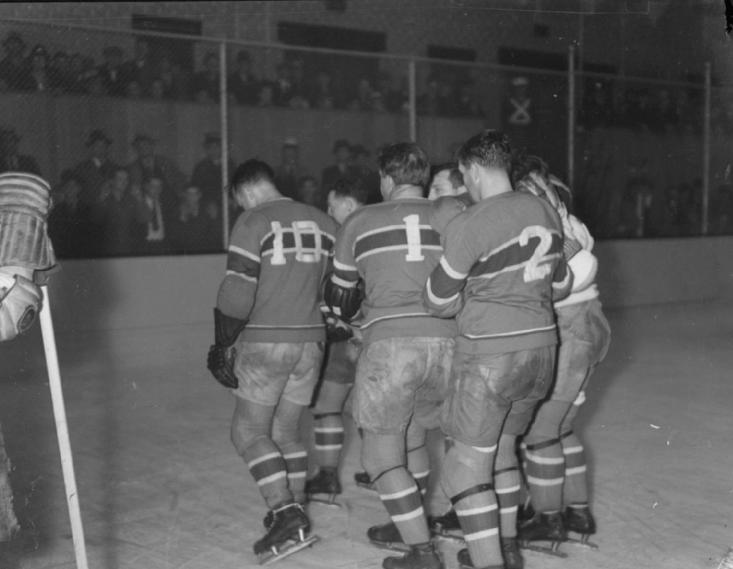 So who were the Lachine Canadiens, you may be asking?

Back in the 1930s, NHL pre-season schedules often consisted of clubs playing games against local teams of various names and associations, and at the time, despite appearances, there was no such team known as the Lachine Canadiens.

It could well be that the Canadiens simply held their 1938 training camp in Lachine, Quebec!.

The Habs had previously set up October and November camps in Grimsby, Ontario and later in St-Hyacinthe, Quebec. There is no known documentation stating that they ever set up shop in Lachine prior to a campaign - other than these Conrad Poirier shots.

Perhaps the Habs simply split up a roster of veterans and team hopefuls and held scrimmages at a Lachine arena?

The unstriped plain white "CH" adorning sweaters may give creedence to such a notion. By all appearances, a "CH" logo was simply slapped onto a white wool knit sweater in order to differenciate an opponent.

It would be a full seven seasons before the Montreal Canadiens adopted home whites for games at the Forum.

Pictured above are team captain "Babe" Siebert (1), Paul Haynes (10), and Marvin Wentworth (2). Of The photos captured below by Poirier, only the number 15 is discernable. Worn the season prior by Joffre Desilets, it was worn by players named Louis Trudel, George Brown and Dessie Smith during the 1938-39 Canadiens campaign. 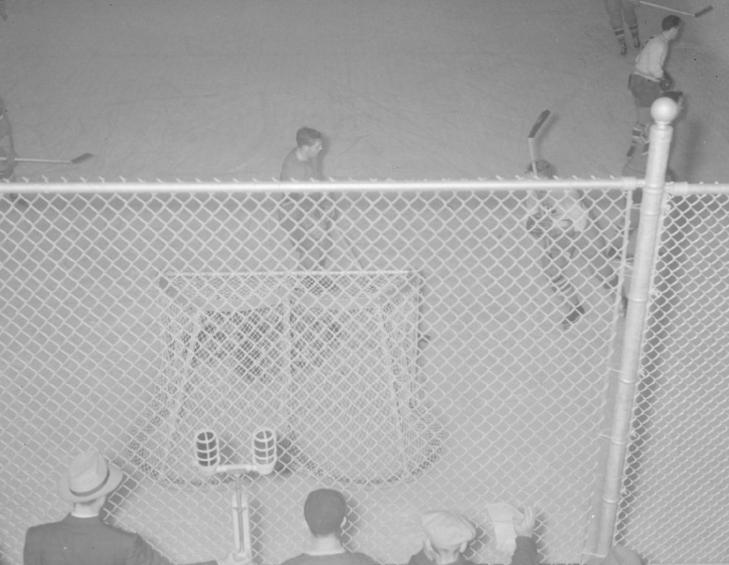 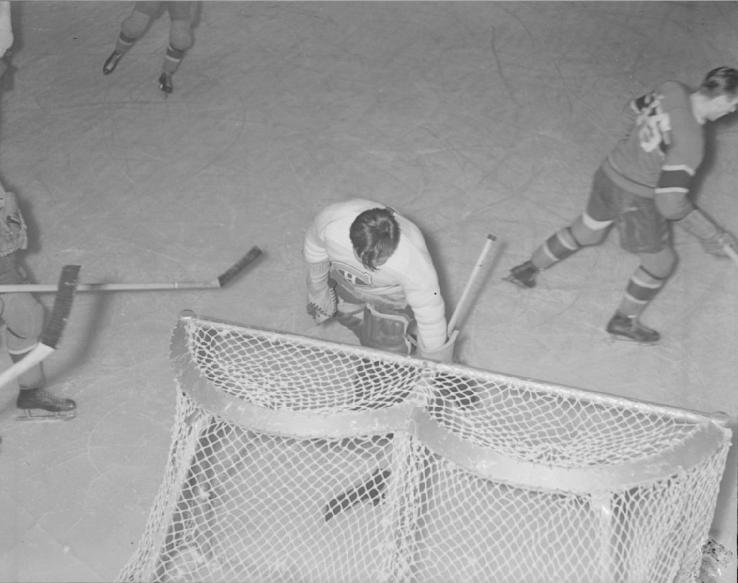 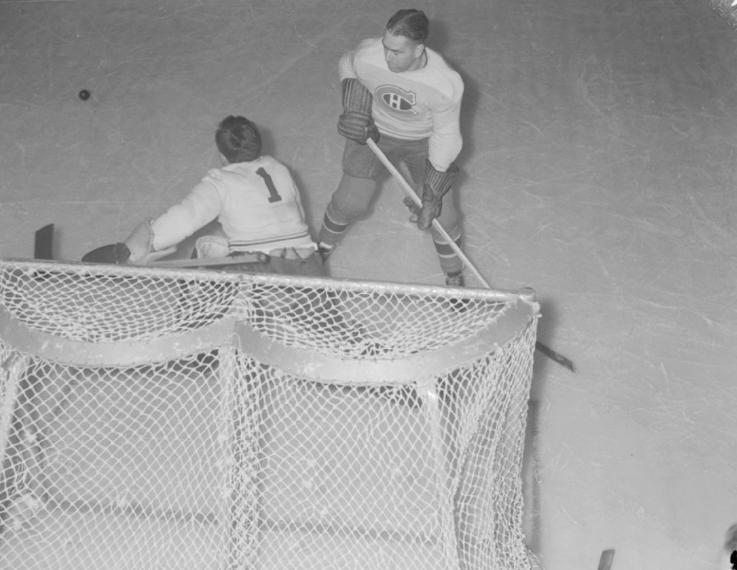 What differentiated Poirier's work from others of the era, was that he employed a larger than normal format camera at a time when the 35mm camera was coming into vogue for documentation purposes . Poirier shot thousands of photos, that were named, catalogued and classified by himself, in the National Archives Library of Quebec.