33 Points By A Junior Line In One Game

Share All sharing options for: 33 Points By A Junior Line In One Game 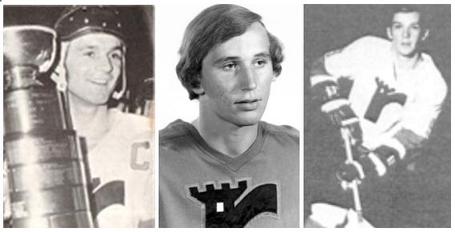 That's a season for some lines, but it was close to just another night at the office for the line of future NHL'ers Guy Lafleur, Andre Savard and Michel Briere.

The Remparts went on to win the 1971 Memorial Cup that season, with future Canadien Guy Lafleur as captain. Lafleur and linemates Savard and Briere finished 1-2-3 in QMJHL scoring that year and the line set all kinds of long standing league records.

Lafleur, the right wing on the line, had a wicked season, one of truly legendary proportions, as he tallied 130 goals and 79 assists for 209 points in the 62 game season. The goals mark stood until 1983, when Mario Lemieux added three netters to that total.

Briere, on the left side, scored 51 times, and added 93 assists. Briere, is not to be confused with the Pittsburgh Penguins player of the same name, who was tragically killed in a vehicular mishap one summer prior. I was researching some information on the late Briere, when I was lead to the QMJHL website, where I discovered the game sheets you will see below.

Centre Savard, the future Bruin, Sabre and Nordiques player, and future Habs GM, landed at an even 50 goals and added 89 helpers.

In the post season, Lafleur continued his single handed QMJHL destruction, as he scored 22 goals and 21 assists in 14 playoff games, as the Remparts won all but one game on the way to winning the Memorial Cup. 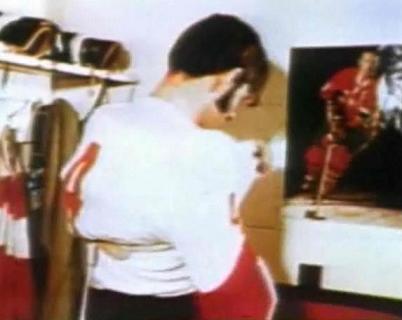 Poor Yvon Belisle. The Rosemont National goaltender likely still has nightmares of Lafleur and company. On that January night, Lord only knows how many shots on goal he faced in a 14-1 loss.

The final tally showed Savard setting an all time league record for points in a game with 12. His 3 goals and 9 assists were one point more than Lafleur, who hit net seven times, adding four helpers. Briere, for his part, scooped up 7 assists to go along with a hat trick.

Tallied all up, it came to a resounding 33 points. It wasn't that Rosemount were incredibly bad - they were - but Quebec's top line made a habit that season of chewing up all that stepped in their path. 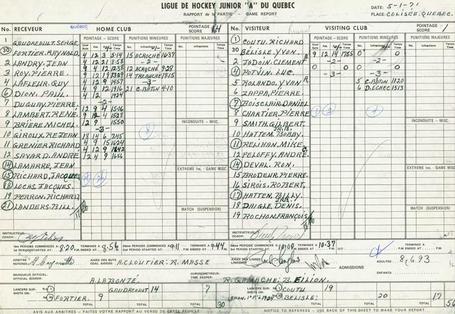 While everyone is familiar with Lafleur's NHL ascention and conquests, and Savard made his way through the NHL ranks, less is known of Briere, who was oddly never drafted. Searching information on him usually leads to his namesake, which is what started me to finding this game sheet initially. As a 20 year old in his final season of junior, Briere moved on to the IHL Fort Wayne Komets, where he registered one assist in three games before ending his hockey career.

Curiously, two seasons after drating Lafleur, the Canadiens could also have drafted Savard. The opportunity came in 1973, when the Canadiens held the second overall pick. As history notes, the Habs were seemingly uninterested in Savard, as they traded down twice in that draft, accumulating additional picks along the way to selecting Bob Gainey in the eighth position.

Off the top, one must wonder why the Canadiens passed up the chance to unite the duo. The result may have to do with the perception that Lafleur made Savard tick, and not vice versa. The season after Lafleur was chosen, Savard's QMJHL totals dropped 51 points as he played in only 33 games that season. The following season, with Lafleur long gone, Savard's numbers eclipsed his previous highs in 1971. NHL scouts of the day, still viewed the Q conspicuously, as a defensively challenged league where players annually wracked up numbers out of proportion with other junior circuits.

The assessment of Savard was more than likely unfair, as he later developed into dependable two way player, scout, coach and GM. Unfortunately, Savard's destiny in Montreal crossed Gainey's path once again in 2003, when he was replaced by the later as Habs GM.

Today, Savard's single game mark stands, it has been threatened on more than one occasion. Mario Lemieux registered six goals and five assists in his final QMJHL regular season game in 1983 - the night he broke Lafleur's 12 year old standard. Rempart Alexander Radulov also had an 11 point game in his final junior season before joining the Nashville Predators. 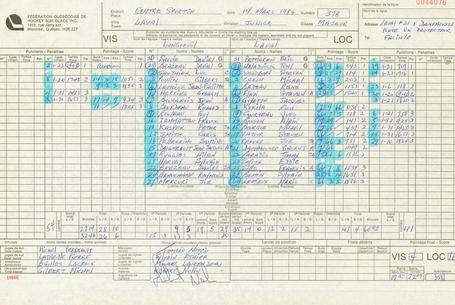