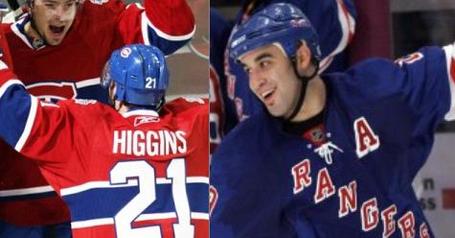 Breaking news from RDS USA, Today and Team 990 in Montreal, that Chris Higgins has been traded to the New York Rangers for center Scott Gomez. The report is as follows:

The Canadiens have landed center Scott Gomez from the New York Rangers in exchange for forward Chris Higgins. RDS has just received confirmation of this trade. At present, Higgins and Gomez are the only two players known to be involved in the transaction.

Gomez is under contract until the 2013-14 season at 8M per season. Last season he tallied 16 goals and 42 assists in 77 games with the Blueshirts.

My analysis of this is complete incomprehension. While Gomez is a savvy center with good passing skills, this deal looks more like a favour to the Rangers than anything else.

UPDATE: 8:35: Hear comments from Higgins and Gomez at Habs Inside Out.

Initial reactions allude shock that the Canadiens would include what is undoubtably one of their top prospects in Ryan McDonagh.

There are also allusions of this trade possibly opening up other deals for both teams while cancelling out others.

What really screams incomprehension at this maddening deal is that not only are two promising assets being sacrificed in return for the Rita McNeil of all contracts, the two minor leaguers don't look like much at first glance. Look below at their stats, courtesy of Hockey Database. 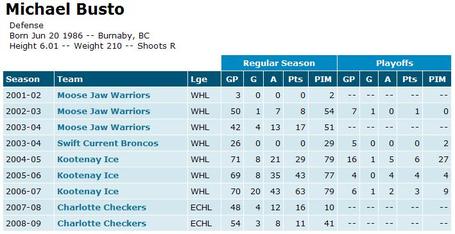 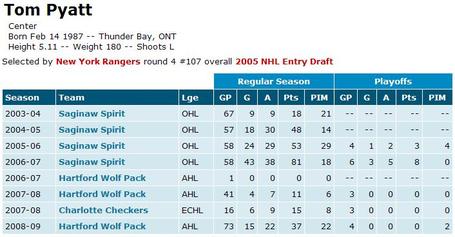 Not that it makes this this trade any easier to swallow, but Gomez's cap hit comes in at $6.7M per year, over five years.

Official confirmation is now up at the Habs Canadiens site. It reads:

"We are extremely pleased to have acquired an impact centreman in Scott Gomez. He is an outstanding playmaker and an excellent skater. Having won the Stanley Cup twice with the New Jersey Devils, he brings a lot of playoff experience to our team. Scott is an elite player who will certainly contribute to the success of our team for years to come," said Bob Gainey.

Scott Gomez, 29, will be entering his 10th NHL season in 2009-10. Last season, the 5’11’’ and 200 lbs centerman led the Rangers (tied with Nikolai Zherdev) with 58 points, including 16 goals in 77 regular season games. As a member of the New Jersey Devils for seven seasons and the New York Rangers for the last two seasons, Gomez recorded 578 points in 706 games, registered 1,914 shots and maintained a plus-60 differential. Gomez proved his durability, having missed a mere 32 regular season games (on a possible 738) during his NHL career. After a seven-year stint with the Devils, Scott Gomez signed a seven year agreement with the New York Rangers as an unrestricted free agent on July 1, 2007.

The first-ever Hispanic player drafted in the first round of the NHL Entry Draft and 18th Alaskan-born player ever selected, Scott Gomez started off his NHL career with the Devils in 1999-00. In his first season with New Jersey, he recorded 70 points in 82 games and clinched the Calder Award as the NHL Rookie of the Year. A two-time Stanley Cup champion with the Devils in 1999-00 and 2002-03, Gomez never missed the Stanley Cup playoffs in his nine-season career, playing 114 postseason games and contributing 81 points, including 27 goals and a plus-15 differential.

On the international stage, Scott Gomez was called upon to represent the United States at the 2006 Winter Olympics in Turin where he recorded five points, including four goals in six games. Earlier today, USA Hockey invited Gomez to its 2010 Olympic orientation camp.

Michael Busto is 23 years old. The 6’1’’, 210-pound defenseman played for the ECHL Charlotte Checkers for the past two seasons. The Burnaby, BC native registered 11 points in 54 games last season (3 goals, 8 assists), and 41 penalty minutes. He joined the Rangers as a free agent in April 2007.

Higgins registered 23 points in 57 games with the Canadiens in 2008-09 (12 goals, 11 assists). The Canadiens’ first round pick in 2002 played in 282 career regular season games in the NHL, and registered 151 points (84 goals, 67 assists). McDonagh, 20, completed in 2008-09 his second season with the University of Wisconsin Badgers in the WCHA. The Canadiens’ first round pick in 2007 recorded 16 points in 36 games (5 goals, 11 assists). Valentenko, 21, played in only four games with the AHL Hamilton Bulldogs before opting to resume his career in Russia with the Moscow Dynamo of the KHL, where he played eight games (0-1-1). Janik, acquired from the Dallas Stars on February 26 in return for Steve Bégin, played in 22 games with Rockford and Hamilton in the AHL, and recorded seven points (0-7-7).