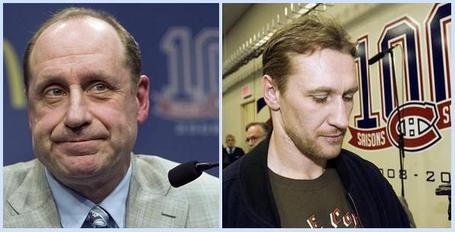 Gainey also cautioned the Canadiens might have to be patient, which was a virtue that was clearly missing among the faithful last night.

Is there any other approach?

Expecting the Canadiens GM to act in an impetuous manner is as likely as Brian Burke being humble. After the events of the last 40 games of the 2009 Season and the continual failure for the Canadiens to land a superstar over the last decade, it is the last thing that the Canadiens faithful wanted to hear on the eve July 1st.

Jay Bouwmeester, Mike Cammalleri, Henrik Sedin and Daniel Sedin are the names that Canadiens fans dream off come Christmas in July. Are these really the moves that will make the Canadiens Stanley Cup contenders? The completion of this assignment is a parade down St. Catherines, not becoming the star of the pre-season previews. The Canadiens future lies in the hands of the youthful core that Timmins and Gainey have assembled. Spending recklessly over the next week could alter that foundation and with one of the strongest minor league systems in the NHL, cripple it's ability for the ascendancy of the next generation.

It is wonderful to throw around Free Agent names that will transform this team into contenders, but Gainey needs to be careful with the real possibility of a declining cap entering the summer of 2010/11. The general perception is that Gainey has a ton of money to spend this off season, but all of this speculation does not take into account the maturation of the core of this team over the next 2-3 years. Last season the young core of the Canadiens made $14.5 Million Dollars, but what will that number be after 2011?

(The 2009 numbers have the bonuses automatically added to their cap hit, therefore Carey Price could see a paycut should he not hit his bonus incentives in 2009-10)

With the current economic reccesion, how will the cap be affected? And if it does decline to the $50M range, how will it change the spending philosophy of the Canadiens? If these 10 core guys improve as expected, how much does that leave for the 13 other players making up the 2011-12 Montreal Canadiens?

Offering up reasonable raises to the core leaves you with a much different cap figure.

If any of those players regress, will they get a pay cut? Unlikely. If any of them offer zero growth, they will still likely get small raises. Michael Ryder's numbers plateaued and his +/- plummeted yet he continually received a raise as an RFA). Should any of the current Canadiens enjoy a breakout season, their numbers have the potential to skyrocket.

At a $50M salary cap, the Canadiens would be looking at $25M to spend on 13 more players. As of today the Canadiens have nobody signed through 2011-12. That will change in the next couple of days.

The Canadiens will want to renew Markov, who, with no raise, will still be making $.5.75M. Add in Tanguay with no raise and there are now 11 players left to sign with $13.5M. With the expected arrival of Ryan McDonagh and the continued development of Yannick Weber we can pencil them in for entry level money.

These 14 players now bring the team payroll to $38.2M. Add in two Sedin's in two days, or possibly a Mike Cammalleri and it doesn't leave much leg room for other additions. Sure, Francois Beauchemin can replace Mike Komisarek should he leave, but with these type of numbers, I do not expect Gainey to be swinging for the fences come July 1st.

What is more likely is resigning Alex Kovalev to a short term deal, and resigning Alex Tanguay and Saku Koivu and remaining patient with the youthful core and reliant on the system that Jacques Martin will install to return to the 2008 level.

This is the smart stance to take. Take a look around the league and the cap numbers.

Once again take the small leap and assume the cap will drop to the $50M range. 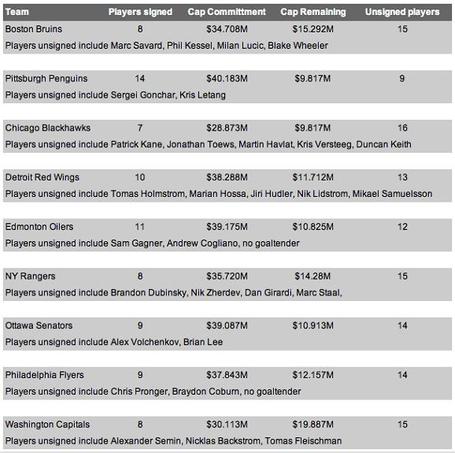 With those teams likely out of the 2010 Summer bidding frenzy and pushed up against the cap because of salary already committed, the opportunity to buy next year could prove very profitable. Will teams unload players to re-up their youth? Will young players spring free because of teams that cannot remove themselves from their salary commitments?

At the deadline next season will UFAs like Rick Nash and Ilya Kovalchuk be available?

It is why I think the Canadiens should remain cap flexible throughout 2009-10. Gainey should spend the next 3 months filling holes like he did with Robert Lang. Short term deals that will not handcuff the franchise should the scenario I mentioned arise in the next 9 to 12 months.

Should a Vincent Lecavalier type deal arise, the Canadiens will be able to create the cap space through the players they deal. This strategy allows Gainey to see if his team was the 1st place team of 2008, or the 8th place team from 2009. It allows for another year to watch the youth develop.

The Canadiens have great organizational depth on defense, in goal and if they sign Alex Tanguay, strength down the left side. Their greatest organization weakness is a large, physical center. Adding Bouwmeester, the Sedin's or Cammaleri will not vault this team to the level of Cup contender. I don't see how these players would address their greatest needs.

Why not be patient and begin to use the young cheap assets that the Canadiens have developed to acquire the players that can push them to the next level. All free agents are overpaid, and chasing UFA's in an off season with only second tier players available makes it almost impossible to get maximum value. Trying to take a shot when you are not ready can lead to disaster, and last season proved that they are not ready to join the Penguins and Red Wings.

The future of the Canadiens franchise is on the shoulders of the kids and the developmental program that Timmins and Gainey have installed, and not in the instant gratification of signing UFA's. The Habs don't have the millions everybody believes they do to blow their brains out. The goal should be to create an organization that places itself at a championship level every season.

I understand the criticisms that Gainey has already had in his 5 year rebuilding window and I too want results now, but in the five seasons prior to Gainey's arrival the Canadiens made the playoffs ONCE. Since his appointment in May 2003 the first five years of his rebuild have resulted in four playoff appearances (the fifth appearance was missed by 1 point) and the first Eastern Conference regular season title since 1989.

The disaster of 2008-09 is still on the forefront of everybody's mind, but Gainey needs to establish whether 2009 or 2008 was the aberration. With the summer of 2010 looming as a buyer's market it is imperative that he doesn't overreact to media and fan pressure.

I'm in Bob, remain flexible. In my eyes you have earned one more year, but the next calendar year will define your legacy as GM in Montreal.