Surely fans of the Montreal Canadiens have heard that as part of the club's 100th Anniversary celebrations that the organization will soon be unveiling the long-awaited Canadiens Hall of Fame.

Plans are coming together to create a veritable museum dedicated to Canadiens history, and it is expected to open to the public shortly after the beginning of the 2009-10 season. Located in the area of the former ticket sales section on the bottom floor of the Bell, the showing will contain a multitude of exhibits detailing one hundred years of hockey history.

In order to enhance the different exhibits on display at the Canadiens Hall of Fame, the organization is seeking items of interest related to the club’s long history, the players, and professional hockey in Montreal.

This is where fans such as you and I can help!

By submitting an item, it will not automatically mean that your contribution will be retained. Your item will need to pass through an evaluation process, and if it's chosen, you'll be contacted by a Canadiens rep. If your item is accepted, you will be contacted within three to five weeks of your submission, asked selected questions about the item, and explained the next steps in the process. Basically, you will be asked to fill out a few forms, sign some papers and ship your donated or loaned item off to the Canadiens organization.

The coolest thing about this is not only will your item be on display in the Canadiens Hall of Fame, contributors who donate their item will be given listed credit next to it, a pair of regular season tickets in the whites and four passes to the Canadiens Hockey Hall of Fame. Fans who choose to simply loan items rather than donate them will have a chance to win the same prizes.

Now here are the type of items and memorabilia the club is seeking, and it covers a wide range of just about everything imaginable. 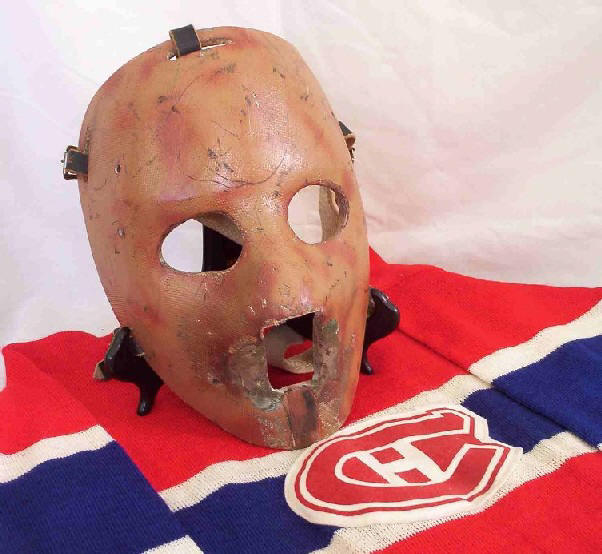 My guess is, the more unique your item is, the better chance it will be selected.

By the sound of it, this is going to be one rocking hockey museum that you will want to visit more than once. For those who have not yet had the opportunity to visit the Bell Centre and take a tour of the building, this should provide one awesome way to cap the visit off.

For myself, my item has already been submitted. When thinking of the most rare item I could contribute, it immediately came to me that I have audio discs from the 1972-73 Stanley Cup Final to offer. Regular readers here may be familiar with the sounds of Danny Gallivan and Dick Irvin describing the Canadiens win over the Chicago Blackhawks that sweet spring, as the contents were made available at this site a short while back in three separate postings. They include Game One of the Stanley Cup Final in two half-hour clips, and the end of Game Six, when the Canadiens win their 18th Stanley Cup.

Have a listen - they bring back such vivid memories! 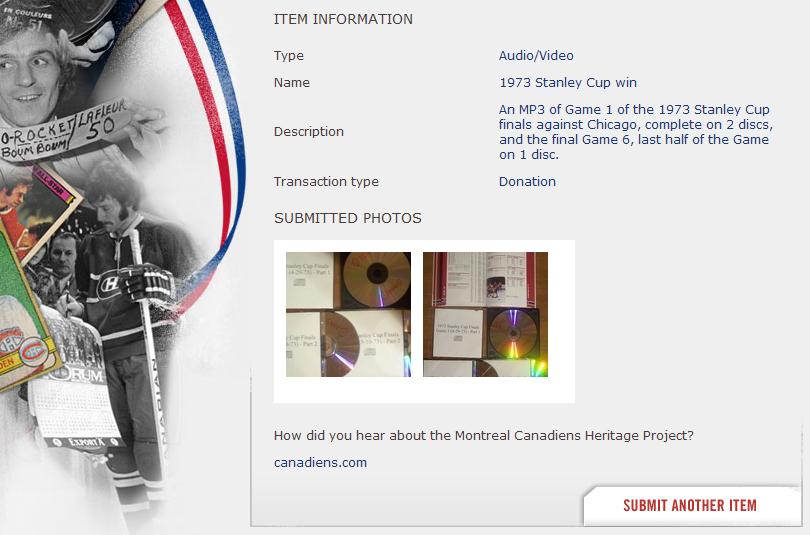 A long-time reader from the west coast, a gentleman named Phil Leduc, sent me the discs last summer, and I have been grateful for them ever since the day they arrived. No doubt I will be copying the discs in the event that the Canadiens feel they should be part of their museum.

I'm thinking, if you are touring the exhibits, isn't a clip of the Habs winning the Cup exactly the type of audio you would love to hear while glancing at a battered Henri Richard sweater from that same season?

I'll be anxiously awaiting for a Habs rep to contact me on my discs.

And Mr. Leduc, you have dibs on one of those game tickets and two passes if ever your recording efforts are chosen!

Check out the Canadiens official site to learn more about the museum and how to submit your item.

These links will lead you to all the information you need to get started. If you have any plans to pass something along, I would enjoy hearing about it here.