Gainey's Roll Of The Dice

Share All sharing options for: Gainey's Roll Of The Dice

Aside from the Molson family buying the Candiens lock, stock and barrel this past week, good news in regards to the team has been at a minimum. With the draft just days ahead, reports are that Gainey will not have any announcement pertaining to free agents - the club's own - until after the draft. That leaves three days between the opening of the summer market to make some steps forward.

Does that make you as nervous as it does me?

I'm not liking this much at all. The Canadiens cupboard is rather bare at the moment.

With the future of ten free agents in waiting, the legendary Gainey patience is testing the same patience and faith of the entire fanbase, media included. Rumours, both wild, speculative, and sensible, are doing nothing to quell the emotions of everyone invloved.

Rather, make that everyone not invloved.

We, on the outside, have no inkling of his thinking. Yes, it was an intersting concept to have great cash flexibility this off season, but I'm hardly content that the current free agent pool in waiting offers the solution the club needs.

My own personal position comes closer to being comfortable with the known quantities of last season's team that it does with the variables of available free agents about to be signed this summer.

Gainey must have a rock solid plan in place for the amount of time he's taking to settle these concerns, but I don't see it, and I'm not quite sure I ever have.

To me, the prime area of concern on the Canadiens is upgrading at the center position, and barring an unforeseen trade, I don't see alot of improvement on the horizon with free agency.

A quick scan through the available quantities offers little reassurance. Here's a rundown for Sports City.com: 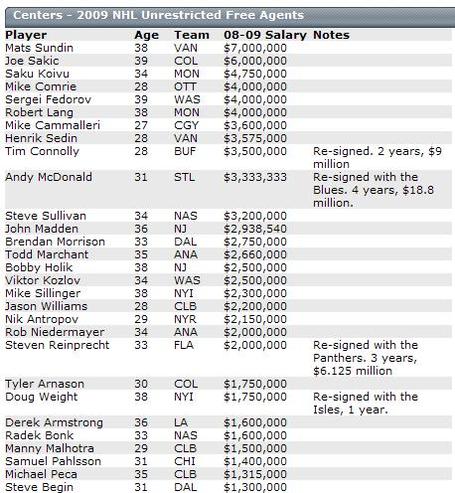 Twenty seven year old Mike Cammalleri is coming off a career season in which he hit for 82 points while centering Jarome Iginla. The pair made for a pretty synched duo, but there are no Iginlas in Montreal. Still, for the salary he's likely to command - 2 career playoff goals.

Right below is Henrik Sedin, who has a shotgun riding brother that is part of any deal. The twins are an interesting option that ought to eat up a sizeable chunk of annual renumeration, especially with words the boys want a long term - 12 year - deal for their services and dedication. For all the playoff success this duo has had, I'd tiptoe around this landmine. No thanks!

Knowing what Saku Koivu has consistently brought to the Canadiens table, it's starting to get bleak should he not return.

After Cammalleri and Sedin, we get into the Victor Kozlov / Steve Sullivan / Brendan Morrison grey area. If these are options up for discussion, we're in a heck of a doggie bag!

Such, then makes Lang alluring once more.

Down the list is one interesting name, that of 28 year old Alexandre Giroux, of the Washington Capitals / Hershey Bears. Giroux, as local as his name suggests, had a killer regular season and a dominant playoff while leading the Bears to the Calder Cup. All the mitigating factors are present to suggest he's low end help for an NHL team looking to get into the middle of the pack. And the Calder ain't named Stanley.

Last season, the Canadiens middle of Koivu, Lang, Plekanec, and Lapierre had a certain upside over 50 games, and much less in the final run.

The team taking the big mug had Crosby, Malkin, and Staal.

It begs the unreal notion - would the Canadiens measure up with say, Henrik, Cammalleri and Lang?

I'm not too sure they'd be all that further ahead.

There are teams out there who want to free up cap space and dump big salaried players. You can bet that they have spoken with Gainey more than once. Daniel Briere is available at Harlem hooker rates; sacrificing Patrick Marleau might be part of San Jose's rethink and retool, and depending on Oren Koules mood of the moment in T Bay, Vinny might also be up for graps.

As for Briere, who shunned the Habs two off season's ago, he's about to become an NHL orphan and it looks good on him. Marleau, as good as he can look in the regular season, has never taken his club to another level despite playing on some very strong clubs.

On Lecavalier, there are concerns dealing with the weight of his contract, the length of it, and injuries leading to uminformed views that he's damaged goods. Unless one has a medical report on Lecavalier's surgery, such is opinions are discountable.

It remains that Lecavalier is the one player mentioned above that can be spoken in the same breath as Crosby and Malkin concerning achievements. He's won what the Canadiens are after, which makes him a logical starting point, should he truly be available.

Gainey's dice roll almost implies that he knows of something we are not privelege to. His stoic demeanor and poker face could also suggest a bluff. In Gainey paraphrase, he often speaks of the cards in his deck as aces and kings in terms of assets. To further the analogies, he plays his cards close, reveals little in the way of a hint at where he's headed.

Should the GM have nothing but deuces in a month, he will have gambled and lost.

His time in Montreal would be up.

It makes me wonder why this risk would be run?