It is day six of the SB Nation NHL Mock Draft, and my scouts and I came to a final decision this past Friday afternoon on our selection.

Share All sharing options for: With the 18th pick in the 2009 SB Nation NHL Mock Draft, EOTP selects ...

It is day six of the SB Nation NHL Mock Draft, and my scouts and I came to a final decision this past Friday afternoon on our selection.

When I say "my scouts", I'm not fooling. I took this mock draft quite seriously, and polled three sources to come up with a consensus pick once the players I had hoped to snap up were off the table.

How seriously did I take all of this? Perhaps a little too much - I even pulled off a mock trade!

The trade was vetoed by SBN, as this was only an excercise in a speculative drafting template for readers to get the gist of how the draft process might go down next weekend. Had 30 bloggers been enabled to wheel and deal, all semblance of that surely would have been shot to hell.

I had my sights set firmly on two players: Louis Leblanc of the USHL Omaha Lancers and Massachusetts’ Phillips Andover Academy center Chris Kreider. After Leblanc went 14th to the Litter Box Cats (Florida Panthers), I started getting nervous when it came to the Blues 17th pick.

St. Louis Game Time were not interested in any mock trade scenarios allowing me to trade up, and of course settled on Kreider. Dang!

Looking at the next group of players, it was a toss up. I liked the general package offered by Peter Holland of the Guelph Storm, but felt there were some concerns about his willingness to go nose first to the net. Another center - Jacob Josefson - I really did know enough about to make a call. I was curious about the Brandon Wheat Kings' Scott Glennie, who seemed to be the best player available. Glennie had dropped down some in the draft order, and I wanted to know just why he was still available. It turns out there were no legitimate concerns. Glennie had an injury this past season, and recovered from it in brilliant form.

That was when my mock trade notion came into play. I sent a note off to Jim at Blueshirt Banter, who was wiling to flip flop the Rangers pick with mine. What I had in mind had less to do with a draft choice than it did a more pressing matter, that being the Mike Komisarek situation.

For three summers now, the Canadiens have lost a free agent defenseman. After Sheldon Souray and Mark Streit, it looks as though Komisarek is prepared to test the open market on July 1. In my mock draft and trade scenario, I thought I'd do something to patch the bleeding.

What I did was send Komisarek's negotiating rights to New York, where he'd likely sign, and tossed in the NHL unwilling Alexei Emelin and prospect Kyle Chipchura along with pick 18 for the Rangers 19th pick and defenseman Mark Staal.

I thought I pulled off a pretty good one until it was vetoed.

At that point, I called upon my scouts. Wamsley had been privelege to my mock trade conversations, and knew I was tilting in Glennie's direction. He concurred that it was the best choice once Kreider was off the board. Kevin van Steendelar (Ya! The Habs Rule!) had a thing for Josefson, and his insistance gave me reason to take a closer look. While the player was of interest, I was looking for a little more character. Once I informed Kevin that Glennie was still up for grabs he conceded that it was best to go with him.

With my mind set firmly on Glennie, I looked to someone I felt could either change my course of thinking or confirm my decision. I rang up Steve Kerley - my head scout for all intents - and asked about the player. Steve offered a lengthy rundown of positive attributes, while noting that Glennie played center as much as he had played wing. Here is what Steve brought up:

Good work Steve! That's an awful lot to like about an 18 year old. Makes me truly wonder if he would be available in the 18th slot come next Friday. 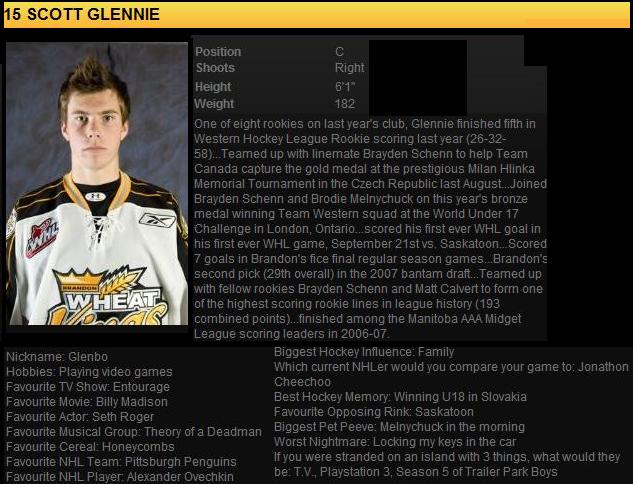 Ryan Kennedy of the Hockey News, in an article entitled Kid among Kings, had this to say after Glennie's recent playoff with the Wheat Kings.

As part of Brandon’s dazzling Kid Line alongside Matt Calvert and Brayden Schenn, Glennie’s junior career has been quite impressive so far, culminating in an 18-point playoff performance over 12 games. Unfortunately, that run was ended abruptly by Calgary in the Eastern Conference final, but Glennie knows he’ll get a shot at the Memorial Cup next year when Brandon hosts.

"The Memorial Cup is obviously a huge thing," Glennie said. "I think we have to look at ourselves as one of the better teams (next year) and we have to play that way."

Lauded for his skating and shooting ability, Glennie will be a hot commodity at the draft this summer, joining linemate Schenn in the first round. Ironically, playing together alongside Calvert has likely boosted both of their stocks.

"I think we have good chemistry," Glennie said. "It’s fun out there. We’re all unselfish players and we like to move the puck around."

Citing Philadelphia’s Jeff Carter as an influence, Glennie is confident in his skills, but knows he doesn’t need to rush himself to the NHL next season, especially with a guaranteed ticket to the Memorial Cup.

"The jump to the NHL is obviously a big step," he said. But based on his skill set, it’s not out of the question to see Glennie in a pro jersey sooner than later.