Share All sharing options for: Canadiens Sold To Molson Family!!! 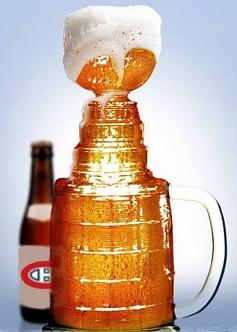 George Gillett has sold the Montreal Canadiens to the Molson family.

I almost want to hug Uncle George, for doing the right thing once again.

The story is apparently just breaking and will be announced later this afternoon. Habs Inside Out is all over it, writing the story as it breaks. I'll have more here later today, generally linking all stories and reports as this post evolves. There is also a work in progress, detailing the history of Canadiens ownership from 1909 to today. It's currently writen up to 1935. I may post it in sections, as this story is breaking a day or so ahead of my plans.

Dave Stubbs' Saturday afternoon is shot, but he's greatfully thankful for no Celine Dion association inside the Bell centre walls!

From a Canadiens fans point of view, this sale is far and away the best possible scenario. The Molson family - sons Geoff, Andrew and Justin - are concerned only with hockey, the running of the club and it's success on the ice. They will be non meddling, hands off owners who will continue to give the club a stable front office.

This sale will likely provide the smoothest ownership transition possible.

UPDATE 3:45 - Reports are now trickling in that the sale price is in the $550 million range. La Presse is also reporting that former GM Serge Savard could be involved in the ownership group. There was previous speculation saying such, and that the BCE group may also be in behind the scenes.

UPDATE 3:55 - Certain media suggest the price is both higher and lower than quoted above. According to ESPN, Comish Bettman had this to say:

"I think to the extent that they've been able to find people who are obviously passionate about the game and structure a transaction that makes sense for everybody, that's a real plus for the franchise and the fans in Montreal."

UPDATE 6:00 - George Gillett has confirmed the sale to RDS admittedly with a very heavy heart. Of the many things Uncle George said, he expressed sadness in making the sale and spoke of how proud he was to have owned the club during his tenure. Gillett was especially pleased that he was able to return the team to it's Molson roots. He also mentioned that the sale was completed late last night, and that it would likely be Monday before himself and the Molson brothers hold any press conferences.