Share All sharing options for: Kovy's House, And A Classic Hockey Joke 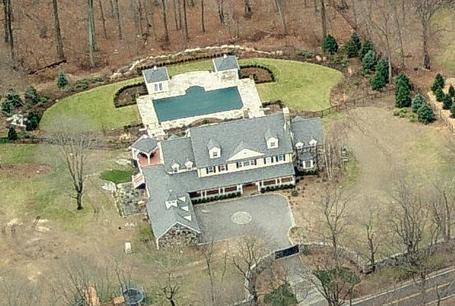 Have you wondered what the pads of NHL players look like?

The sky shot above is of the Habs' Alex Kovalev mansion in Greenwich, Connecticut. The photo is taken from a site called Virtual Globetrotting, and features views of the homes of over 200 NHL players.

Some of places are absolutely amazing - check it out.

I've heard this one many a time, maybe you haven't.

It's game 7 of the Stanley Cup finals, and a man makes his way to his seat at the center ice red line. He sits down, and before long, notices the seat next to him is empty. He leans over and asks his neighbor if someone will be sitting there.

"That's incredible", says the man, "Who in their right mind would have a seat like this for the final game of the Stanley Cup final, and not make use of it?"

The neighbour replies, "Well actually, the seat is mine. I was supposed to come with my wife, but she passed away. This is the first Stanley Cup game we have missed since 1967."

"Oh, I'm so sorry to hear that", said the man, "but couldn't you have found a friend or relative, even a neighbour to take the seat?"

The man shakes his head. "I asked, but they're all going to the funeral!"