Share All sharing options for: My NHL Awards, Done Right, With Unpredictable Suspense! 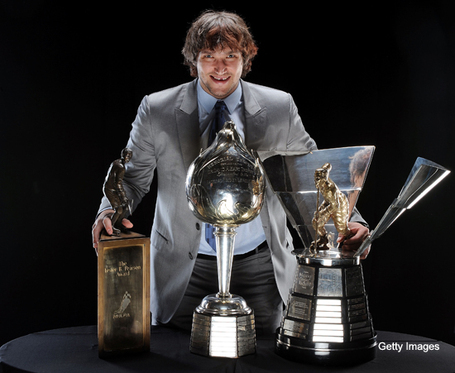 I'm not indifferent to the NHL award show, it's just that I usually can't find enough curiosity to tune in. Perhaps that is due in part to a lack of suspense from my point of view. I've always felt that announcing the finalists beforehand numbs whatever enthusiam I could muster.

As an example, when was the last time you guessed wrong on the Hart Trophy winner?

Like I say, there's not much in the way of surprise once the three finalists are compared and measured against one another, ad nauseum. As awards are generally voted on by knowledgeable media sources, they rarely contradict the general public's thinking.

Two occasions in recent years, in which I was stymied come to mind immediately. Raycroft over Ryder for the Calder in 2004 and Boudreau over Carbonneau for the Adams last season. There were negligable factors in both wins, as I saw it.

Andrew Raycroft played behind an airtight Bruins defense that year. If anyone watched Boston enough that season and noted the quality of shots Raycroft faced, it would have been pause enough to think twice. On the flipside, no one put pucks in for Michael Ryder that season. He'd come a long way through the minors (ECHL, IHL, AHL) to become one of the few rookies in Habs history to net 20 plus goals.

Ryder's still bulging net mesh, while Raycroft has more holes in him than the mesh net he guards.

Boudreau won out over Carbonneau because the media enjoyed his lighthearted, joking press conferences better. He was a great quote where Carbo was a dry well, mostly. Of course, the Capitals had a great late season surge after Boudreau replaced Glen Hanlon. A coaching change will do that for a team. Was it ever factored in that Boudreau had at his disposal the NHL's most valuable player in Alexander Ovechkin to lead the way? Did anyone notice how hot the Caps got once the Canadiens gifted them with Cristobal Huet in goal down the stretch? How much of that is coaching?

Sounds like Washington GM George McPhee ought to have won the Sam Pollock Award, if there had been one. 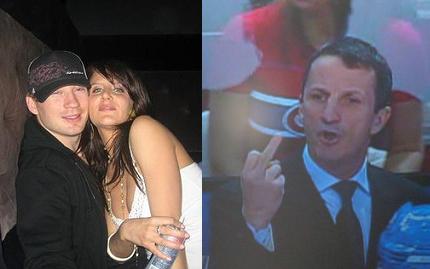 Now there is no disputing that Raycroft enjoyed a standout 2004 campaign, or that Boudreau was the red pepper on the Caps all dressed pizza last season, but certain negligable factors ought to be looked over more than once. Some awards should have a little hindsight in their foresight.

My thinking is, it would be arguments such as these that would make for more lively entertainment come award night.

Maybe instead of singers, dancers, and Dennis Leary or Ron McLean attemping comedy, the NHL awards should go full out American Idol style voting and let the fans have their say.

Wouldn't it be darn exciting to have three former winners of a chosen award select three nominees from a predetermined list of five candidates, announce their choices, and then debate who gets the hardware. Each guy gets 60 seconds to state their case. Then, give fans online and at the end of cell phones a half hour to vote the winners in. The show could be one hour of claim stating, followed by an hour of announcing the winners.

Skip the redundant thank you speeches (show 'em online!), and stick to the meat of the matter - which is the hockey arguments, bar style, like the ones you enjoy with friends and foes.

Now that would be entertainment, battled out in true hockey style, without a trace phoney schmaltz gimmickery that makes these things so lame.

I mean, when the festivities need to be moved to Vegas by the NHL just to get players to show up when claiming their silverware, you know the dead horse you're beating can't be lead to water!

Late yesterday, I Googled around looking for a recap that captured the spirit (or lack thereof) of the evening, and found an awards night live blog at Ya! The Habs Rule! that seemed to sum things up fairly enough. In fact, Kevin got it down so good, not only did I feel like I didn't miss a thing, I felt like I enjoyed the review more than I would have enjoyed the show, had I tuned in!

All in all, Thursday, June 18, 2009, was a notable day for me, through both a monumental thrill and a trivial notion. It had little to do with hockey or the NHL, on that count.

First off, I woke to learn that forever Beatle Paul McCartney turned 67 yesterday, which of course reminded me (not that I needed it) that it has been 42 years since Toronto won a Stanley Cup in 1967.

The longer that lasts - the bigger my grin!

Long time readers here have likely come across a piece or two on my hockey playing daughter that I've affectionately termed "Poke Check". Her four years younger sibling, "Cross Check", did not follow in the shadows of her skate strides, choosing instead to blaze a more rebelious path. "Poke" has a trophy case bursting with accolades, while "Cross" is a more unique breed, who pursues disctinct interest at varying whims.

I imagine that anyone with two children of the same sex know what it's like, and relate. The younger sis has lots to live up to, but she gets my NHL (Nice Happy Lady) award on this day.

Yeah, my little ten year old blew me outta my socks by achieving something completely unique at her school. She won something called the "Catholic Leadership Award", which is handed out annually to students who display traits that involve generosity of spirit in all sorts of ways. (That Catholic part, is not that relevant to me. Any religion promoting goodness and positive spirit from youngsters is awesome stuff - no matter your God, Guru, Buddah or Master.) 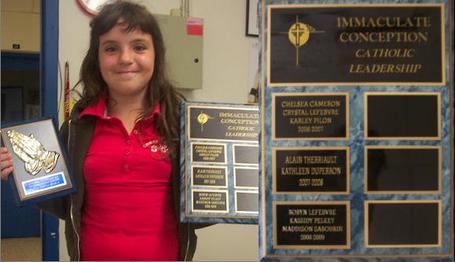 What sets "Cross Check" apart, is that she is the first kid in the school's history to nab the award in Grade 4. Since the inception of the accolade, only Grade sixers have ever been acclaimed. The school was quite impressed, and a big deal was made about it.

The big deal for me, is that the younger sis has achieved something she can be proud of, for herself. The best parts of this, are that she set out to do it from day one of school this year, and that her sister had won it in Grade 6 two years prior, making them the first siblings in that particular school's long history to win together.

Now if only I can get 'em to stop beating each other down in the home....