2009 Draft Targets: For The Canadiens, Chris Kreider Could Be The Guy!

Share All sharing options for: 2009 Draft Targets: For The Canadiens, Chris Kreider Could Be The Guy!

Massachusetts’ Phillips Andover Academy center Chris Kreider's combination of size speed and skill are an alluring package for any team wishing to call his name on June 26. Projected as a mid to late first rounder, Kreider has been on the scouts radar for quite some time now.

He is one of three centers that could be available when the Canadiens pick 18th.

My guess would be that if after 17 selections, he is still sitting with his family in the stands, he'll be coming down to don the bleu, blanc, rouge CH shortly after.

The 17 year old has impressed several organizations with his quick acceleration and booming shot shot. It is said that Kreider has quite the high gear and has the ability to hit top speed in a few quick strides and seconds, Since mid term, Central Scouting have had Kreider as the highest ranked high school player.

NHL.com has the 6 foot, 2 inch, 201 pound Kreider rated as the number 14 prospect among North American skaters. He is described as a "prototypical power forward, a player who plays as big as he looks." 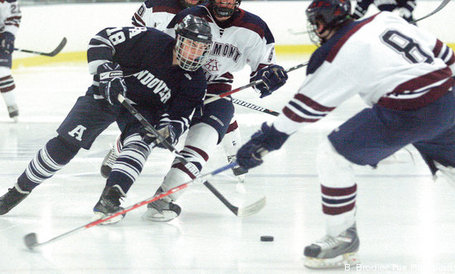 With as many as 4 or 5 Europeans protected for selection in the top dozen picks, Kreider is surely lined up in the Habs scope. As the Canadiens most concerning need at present is down the middle - especially when it comes to size combined with skill - you can be sure the Canadiens know just about all there is to know about this future star.

Perhaps the one drawback in assessing Kreider's skill level, is the league he played in. As a high schooler, Kreider notched 33-23-56 totals in 26 games in a very dominant season at Andover. Still in 11th grade, Kreider is verbally committed to attend Boston College in the fall of 2010.

Many scouts have pointed to Kreider's learning curve to disuade fears of him playing in weaker competition. Central Scouting's Jack Barzee compares Kreider to Eric Staal, and is impressed with his skating stance and stride.

"When he skates down the wing and spreads his legs wide to protect the puck and gain the zone, it's something to see", says Barzee.

Bill Placzek of my NHL Draft.com states "His downside is being from a New England Prep school, Phillips Andover, the competition is far less a measuring stick than players in Junior A.
He is so strong on the puck that if the opposition doesn't stop him in that neutral zone, they are gonna have bigger problems when Chris gets the the pistons at top churn. One stride to top speed."

Barzee adds, "There's a flair about him and he definitely has a second gear. He has a little bit of Staal in him. He's not as thick as Staal, but is really upright and has a little niftiness with the puck. He's got all the tools, the size and the skating." 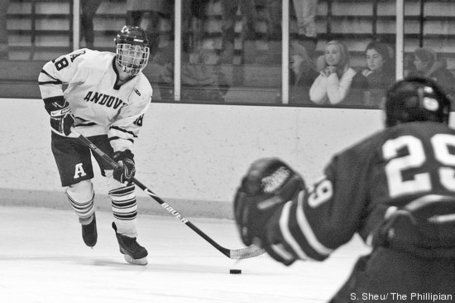 For readers interested in the draft process, Sports Blog Nation's mock draft has been underway for about three days now. While the picks will not be revealed until the weekend coming, 12 selections have been made so far, without Kreider and the two other players profiled here (Louis Leblanc and Peter Holland) being selected. SBN will be announcing three or four selections per day, starting on the eighteenth of June, leading up to the NHL draft June 26.

I thought it could be fun to poll you folks on which of these three players you would like to see snapped up by the Habs. The profiles of Leblanc and Holland are here, if anyone wishes to view them once more.

There will be more player coverage as time and space allows before the 26th. If anyone should like to see other players covered as well, drop me a note.

For more on Kreider, check these reads:

Draft hopeful Kreider brings talent in giant package
Chris Kreider at NHL.com
From Habs World, here is an in depth analysis of the Canadiens drafts of OHL, WHL, and QMJHL players since 2000. It's interesting stuff.