Robert L Note: Readers, please give a warm welcome to new Eyes On The Prize contributor Wamsley. Familiar to long time readers here, Wamsley has contributed hundreds of astute comments since this sites inception and I am proud to have him on board. Wamsley, best known from his site, fantasysensehockey,  will be tackling a variety of subjects and I welcome the different perspective he will bring to the pages. Wamsley's first work here is a very admirable piece of research. So large and emcompassing, we've decided to spread it out over the course of the next week. I hope everyone will enjoy his work and effort.

Generally regarded as a journeyman goaltender who donned the pads for the Montreal Canadiens in the early 80s, he enjoyed a couple of solid years with the Blues and Flames, then finished up his career as a backup with the Toronto Maple Leafs. Essentially an afterthought in the glorious goaltending history of the Montreal Canadiens.

I have used the handle Wamsley for over 5 years on the web. Not because I thought he was an All-Star, but because when the Canadiens first really impacted me as a fan their goaltender was a 22 year old kid named Rick Wamsley. I decided on the name because of the impact on me, and it was obscure enough that only fans of my generation or older would remember the reference.

Recently, I started to scour through the vault at SI and did a search for Wamsley. When I came across this story about the 1982 Canadiens.

"With a goals-against average of 2.75, the Canadiens are the only club in the league allowing fewer than three a game. Berry refuses to say so, but he seems to have settled on Wamsley as his No. 1 man. At week's end Wamsley had played in 19 of Montreal's last 24 games and his 2.63 goals-against average was second best in the NHL among goalies with 20 games or more. First in the league, with a 2.57 average, was Herron...........Wamsley had lost only one of his last 19 starts and had yielded no more than three goals in 17 of them. That's some accomplishment for a man who three years ago wasn't drafted until, as he says, "they were about to shut out the lights. My theory is when your chance comes, you take advantage of it. That's how I've always survived''................ "You know you'll face about five tough shots a game," says Wamsley. "So all I must do is stop all the easy ones and half of the toughies, and we're probably going to win."

The thing that jumped out at me in those paragraph's was the reference to the teams 2.75 GAA. A mark that lead the league while the rest of the league was allowing 3 plus per game.

I also took notice of the final two quotes.

"All I must do is....stop half the toughies and we're probably going will win?"

As a kid, my recollection of the early 80s, was a Habs team that seemed like a Stanley Cup contender continually getting bounced in the first round of the playoffs. The trio of Wamsley, Sevigny and Herron put up monster regular season numbers, but failed in the playoffs EVERY year. But their statistical achievements have been forgotten in time. Wamsley's 1982 season is every bit as impressive as Tim Thomas' 2009 campaign, yet it is ignored.

It is also one of the points I consistently make on my site fantasysensehockey. History is littered with goaltenders who put up monster statistical seasons because of their surroundings. It is why I didn't pile on Carey Price this season, and why I was not waxing poetic about the superhuman effort of Tim Thomas in 2009, and am currently not buying this Chris Osgood is a Hall of Famer talk during the 2009 Stanley Cup Finals.

I also wondered how much has been forgotten because of the lazy evaluation of looking at a 2.75 GAA and not properly adjusting it? This happened continually when discussing Martin Brodeur's assault on Patrick Roy's win total and the direct comparison's that were done.

So I decided to look back to post expansion and adjust the Canadiens goaltending numbers to the average. 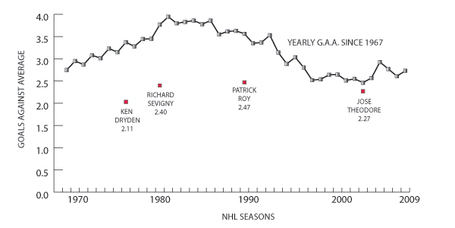 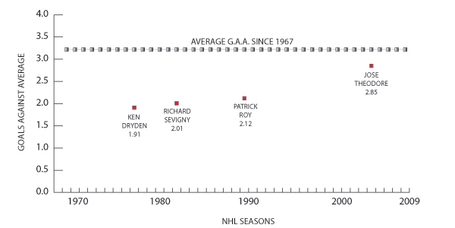 I took the average GAA since 1968 and adjusted the numbers in relation. Patrick Roy's 1989 campaign was almost a 50% improvement on the league average, so I adjusted his numbers to reflect the mean. With all things being equal, Roy's GAA would improve from 2.47 to 2.12, whereas Theodore's 2004 campaign (the lowest scoring season post expansion) would see his number balloon from 2.27 to 2.85.

I used the same principles to adjust shutouts and SV%. Unfortunately the NHL did not track SV% pre 1983 and the lack of game logs did not allow me to adjust extra wins/losses earned in OT or shootout. So the list is by no means a bible, but it did allow for some great statistical seasons to be recognized.

With this info I decided for my Eyes On The Prize debut to list the top 50 statistical seasons registered by goaltenders wearing the bleu, blanc et rouge (30 games minimum). This is not a list determining the greatest seasons, or Jose Theodore's 2002 season would have ranked much higher.

it is viewed through a fantasy perspective, and how the straight numbers would have impacted any given fantasy season. I used the rotisserie categories of wIn percentage, save percentage, goals against average and shutouts to determine the ranking. In rotisserie hockey, each category is ranked in order. With 57 goaltenders eligible, each category had a high score of 57, and a low score of 1. After each goaltender was adjusted they were ranked and the result is the following top 50.

The local whipping boy makes the list for his disappointing 2009 campaign. Interesting to note, for all the fans screaming for Halak, that Price nudged him from the list, and that his overall 2009 season was slightly superior.

Now think of how much better he would be if he wasn't kicking puppies, didn't have a drinking problem and wasn't smoking 25 cigarettes at once.

Thibault's last stand. After showing initial promise in 1996, Thibault was chafing under the intense pressure the Montreal media placed on him as Roy's replacement.  Thibault split the work with Andy Moog, and his failure to outperform the veteran resulted in him sitting on the bench for the 1998 playoffs. Ten more games in 1999 and the Habs, upon Thibault's request, dealt him to the Blackhawks for Jeff Hackett.

Andy Moog was a Hab killer. From the 1981 playoffs where he stood on his head and helped the 14th seeded Oilers upset the 3rd seeded Habs, to his annual domination of the Canadiens while with the Bruins from 88-93.

Moog was brought in to mentor Thibault in '98, but in the end he hastened T-Bo's departure. Moog was mediocre, but Thibault was worse. The Canadiens decided to go with Moog who lead the Habs to a first round upset of the Penguins, but in the following round the Canadiens got swept out of the 2008 playoffs with the best goaltender (Jose Theodore) in the organization toiling in the minors.

In the end, his play in the second round did nothing to change his reputation as a Hab killer. With the Canadiens committing to youth in 1999, Moog retired.

Huet followed up his 2006 breakout campaign with an injury plagued lemon, culminating in a brutal game 82 performance against the Maple Leafs with the season on the line. Huet left the door open and with Carey Price's 2007 Bulldogs run and Halak's strong stretch drive, the possibility for $5M per season in Montreal disappeared with the Gillette's playoff revenue.

With the starting job finally his, Vachon enjoyed a solid 1971 season, but his 1- 5 record during the regular season against the Canadiens first round opponent the Bruins, lead to the Canadiens rolling the dice with a large rookie from Cornell.

Vachon took his flamboyant personality to LA. With long hair, a fu manchu moustache and little pressure, he finished up his career an underappreciated All-Star. One wonders what his legacy would have been had he remained in Montreal.

Wamsley was not able to continue momentum from his strong rookie campaign. He battled Richard Sevigny all season for the starting job, and was rewarded with the starting gig in the playoffs.

The Habs were once again upset in round one as they suffered a 3 game sweep by the Sabres. One could hardly blame Wamsley as he gave up 3 goals in the the first two games only to watch the Habs get shut out at home in both games by Bob Sauve.

Another victim of Satan cutting a deal with Steve Penney. History will likely remember him as a piece of the bridge between Ken Dryden and Patrick Roy. The internet will remember the name as a condescending Canadiens fan using his surname.

Sevigny was the last player to wear 33 before Patrick Roy, and although his career did not resemble St. Patrick's, one part of his game did.

The 1980 season was the first season which I retain memories from. My biggest memory was that if Bunny Larocque was starting on Hockey Night in Canada instead of Denis Herron, it meant the Canadiens would lose. Looking back 30 years later at Denis Herron's 25-3-3 record, it seems the simplistic viewpoint of a 6 year old was pretty perceptive. After patiently waiting for his opportunity, Larocque crashed and burned in 1980.