Share All sharing options for: Let The Hockeyless Summer Begin! 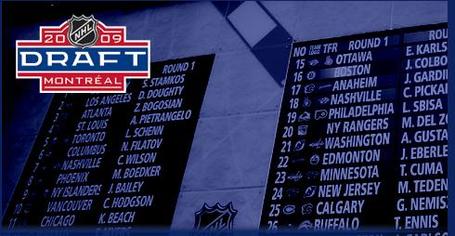 If you are like myself, and consider the void seemingly interminable, it's only 2,784 hours to puck drop. If you want to set a second by second countdown ticker, start it at 167, 040!

The off season is when every true die hard hockey fan scrambles for each and every tidbit of news. For the next two weeks, trade rumours will share the spotlight with the NHL awards in Las Vegas, the Entry Draft on June 26 and the opening of free agent season on July 1.

Of course, for Canadiens fans, this off - season began too early, sometime around 9:40 p.m. on April 22. Since that time, there has been little news of consequence, other than the hiring of Jacques Martin as coach, the signing of defenseman P.K. Subban to a pro contract, and endless speculation revolving around who will buy the team.

By all accounts, a new team owner should be in place in the next two weeks. According to some reports, Habs GM Bob Gainey has held talks with free agents Mike Komisarek, Alex Tanguay and Alex Kovalev. Since Gainey has been in charge, usually once one signing is announced, others follow on an almost daily basis.

At this site, I will be following developments as closely as possible, starting with more coverage on the upcoming draft on the 26th. A pair of player profiles have been posted so far, and there will be a good half dozen others invloving players the Canadiens could potentially select in the 18th spot.

Sports Blog Nation's 30 team bloggers will be holding a mock draft starting this week, with three selections unveiled each day for ten days. This site should be making it's choice about one week from now, possibly next weekend. As each day's mock picks are made, you will be able to read up and follow them here.

As mentioned before, I have now received official confirmation that I will have media credentials for the 2009 Entry Draft on June 26 and 27 in Montreal. It should be quite an adventure, and I hope to return from it with a different view of the day, than I've ever had simply watching things unfold on televison. I'm anxious at the thought of perhaps gaining some interview time with draft picks and Habs personel, along with sharing with readers here, an inside perspective of how things proceed from the floor.

In other EOTP news, I will be announcing a new co - blogger this week at the site. I'm pleased that the site will now offer not only an alternate perspective on things, but additional content as well. My new co - blogger's first post is a whopper, by the way. If you are into Habs goalies trough the years, you will enjoy the work.

As for the remainder of the summer, I will be trying to post as much content as I can here, to keep the hockey deprived with a steady diet of reads. It looks as thought I will be posting another 10 seasons in the Canadiens retrospective, which now has season reviews from 1909 to 1933.

On a final note, I got older today. If Chris Chelios retires, next season will be the first year in my life I have no one in the league my age!