Share All sharing options for: Injuries Responsible For Habs 8th Place Finish In 2008-09

Concerning the Canadiens so called disastrous 2008-09 season, I get asked quite often - via e-mails, questions in on site comments, through friends, relatives, acquaintances, and rank strangers - what exactly do I feel went wrong in the Habs centennial campaign?

To their query - call it repetitive practice makes perfect - I now offer two very standard questions of my own before my response. They are:

What were your expectations of the team in 2009 and, did you follow the team for 82 games with detailed die hard scrutiny?

The most popular answer, is that many fans felt the Canadiens has a legitimate shot at the Cup, and that they had watched as many games as they could. My response and analysis to that end continues, with a probing question or two.

In the year before last - in 2007-08 - did you feel the Canadiens exceeded expectations in finishing first in the Eastern Conference, and to what did you owe such a standing to?

The responses usually agree on surprise in regards to the first place finish in 2008. A variety of explanations and reasons - as individual as those asked - are credited for the Habs 2008 ranking.

All told, I might have heard maybe two people from a two dozen bring up up the lack of injuries to key players in 2007-08 as the reason the Canadiens finished so strongly. For the most part, the reasons for success were credited to young talent improving, Guy Carbonneau's coaching, Bob Gainey's management, Carey Price's goaltending down the stretch, and a career year by Alex Kovalev.

While it cannot be denied that all these aspects played a part in that great breakout year, it is curious to note that one season later, popular opinion has gone a full 360 degrees, and now it is a subpar Kovalev season, Price's distractions, Gainey's horrid drafting, trading, and free agent signing record, the fired Carbonneau's lack of communication skills and handling of the team's younger elements that are all to blame.

Keeping in mind that the Habs earned 11 points less and dropped seven spots in standings, the explanations for failure are generally extreme.

In regards to the Habs youth corps, speculation abounds.

Rumours, speculation, distractions and a myriad of variables defined the Canadiens 2008-09 season in the eyes of the common fan. Everyone, including myself at times, became caught up in the excitement of the centenary. How could we not, when the team was in second place in the conference as mid season approached?

I don't know about yourself, but when I go searching for explanation, I never begin or end with innuendo, rumours, speculations or wild theory. To me, that is an oaf's meanderings.

I gather my conclusions from cold hard facts, and if there is solid evidence there, that is where I start and stop. There is a word for that kind of thinking beyond grey areas - it is called "logic".

The photo below is from page 132 of the Montreal Canadiens 2008-09 Media Guide. It lists and details all injuries and games missed by Habs players that season. You can see who suffered what, and what they add up to in terms of games missed. Do the math, and you can easily understand why the Canadiens - with healthy elements - were a first place team in 2008. 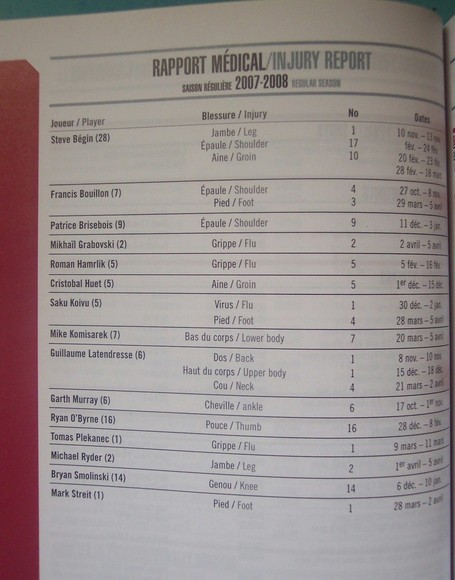 Now that you have reacquainted yourself with those details, and perhaps reached a conclusion, take a look, with a similar point of view, on games missed by players in 2009. The media guide for 2009-10 is not yet published to offer concise and factual details on games missed, but this isn't far off. 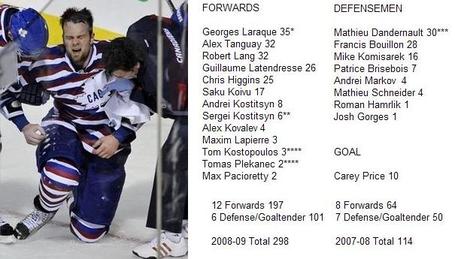 *Georges Laraque - an estimation that he was sidelined by injuries in 35 of the 49 games he did not dress for.

**Sergei Kostitsyn - an estimation that he was sidelined by injuries in 6 of the 26 games he did not dress for, 16 of which were played with the AHL Hamilton Bulldogs.

***Mathieu Danderneault - an estimation that he was sidelined by injuries in 30 of the 41 games he did not dress for.

**** Games lost due to suspensions.