Congratulations are in order for the 2008-09 Stanley Cup champion Pittsburgh Penguins and to SBN's Frank D and Hooks Orpik at PensBurgh.

There's nothing quite like the drama of a Cup final rematch where the new kids on the block take the mug from it's holders. Hockey wins in these rare occurances, and I think every hockey fan has just witnessed a classic confrontation.

What follows here is a scoop of random thoughts on the final and the team and players invloved.

My choice to win the Cup were the Red Wings, a team I annually get behind once the Habs hit the links. About eight weeks ago, I chose three Wings and four Penguins in my playoff draft pool and it payed off nicely today to the tune of a couple of hundred bucks. Marian Hossa, Henrik Zetterberg, Bryan Rafalski, Sergei Gonchar, Bill Guerin, Jordan Staal and Chris Kunitz are my good books. 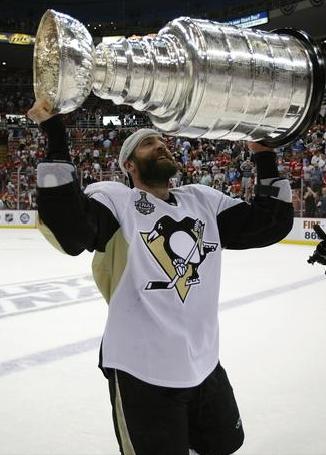 Maxime Talbot can play for the Canadiens as soon as he wishes. I'd take the guy on in a nanosecond. What guts, heart, conviction, perseverance and leadership he displayed, especially in the final!

Talbot would have been my choice for the Smythe, a trophy I've always felt should have more emphasis on the final series than the entire playoff run.

The Fleury tapping of his crossbar should go down in Cup lore with Roy's wink!

I can't help but think back to the press conference fit thrown by Michel Therrien 4 years ago, as a franchise defining turning point. I think the NHL should pass a motion that if a coach if fired past the 40 game mark in a season and the club goes on to win the Cup, he should get his name on it. While Bylsma did excellent work in commanding the Penguins to this win, there is still much of Therrien's stamp on this team. He deserves the credit due him.

It must suck to be Marian Hossa right now! I mean, not only is he named Marian, but wouldn't you just love to be there when a reporter asks "So, where do you think you'll sign next year?"

You can bet that Talbot kept his promise, looked Hossa in the eye and said, "You picked the wrong team!" That's a classic line that will keep me chuckling for years!

What amazed me most about the series and the Penguins' play, was how well they adjusted to Detroit's strengths as the series wore down. Winning four of the last five games in the round is stunning enough, but the Pens gave the Wings virtually nothing to build on in the final two games.

I don't buy that Detroit were tired and worn down, I see it as the Penguins exhausted them with a coverage so thourough, the mental frustration robbed them of their creativity. The Wings forwards just could not pierce the Penguins defense, and rebounds were virtually inexistant.

Seeing a hoarse and teary eyed Bill Guerin savouring the moment after 14 seasons between Cups places a solid perspective on how hard Stanley is to win. Guerin, in post game interviews clearly appreciated this one. It must run through his mind how close he came to being dealt to Washington.

There were several turning points in the series, but some of the biggest were Fleury's save on Cleary late in Game 6, Staal's short handed goal in Game 4, and Bylsma's decision to place Talbot on Malkin's line. Scuderi clearing a couple of loose pucks bouncing near the goal line were as gigantic in the big picture as any goal scored. 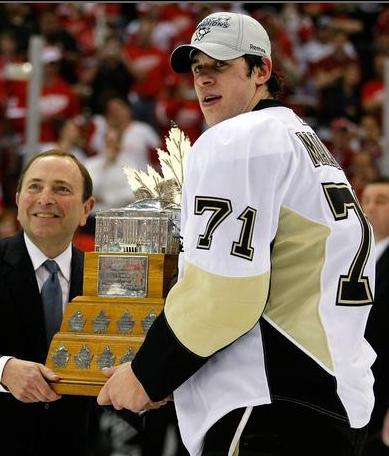 Bylsma's managing of his bench after Crosby's injury is testament to what a sharp coaching mind he has. From the moment Talbot gave the Pens a 2-0 lead, Bylsma's troops were focused on how they needed to shut down the Wings. You would expect a young club to falter from sheer exhuberance some, but they were composed in every step they took on the ice. With Crosby out, no one attempted to over compensate, no one made selfish plays or extended shifts, and the Penguins discipline was exempliary for such a young bunch.

Byslma will coach at least a decade in the NHL, and many of these Penguins have won their first of many Cups.

A thought about the Red Wings: Every bit as worthy of winning as the Penguins, they should not waste a moment of second guessing themselves. They do everything an organization should do to win Cups, and they will be back in the final without a whole lot of tinkering. It was a final of inches, subtle shifts in momentum and breaks. Nothing they did or did not do, lost the series for them. It was Pittsburgh, fully and completely, who won it from them.

The Penguins story is often the story of Crosby and Malkin, but this Cup win clearly shows that it takes 20 sets of contributing arms to raise a Cup. While Sid and Geno did all that was expected of them and more, there is no shortage of unsung heroes on the Penguins.

In Penguins lore, a momentous date has to be February 14, 2009. Call it the St. Valentine's day massacre - a 6-2 loss in Toronto that ended the Michel Therrien era and lead to Dan Bylsma's beginnings.

Over seven game, Detroit outscored Pittsburgh 17 -13, one of the rare occurances where the loser nets more goals than the winner.

From a 34 year old Sergei Gonchar to a 21 year old Kris Letang, the Pens defense on the surface does not look like one that would make any opponent tremble, nevermind getting their names as a group onto the Stanley Cup. A crew filled out with soldiers such as Mark Eaton, Brooks Orpik, Phillippe Boucher, Hal Gill and Rob Scuderi defied all expectations and assessement. Why they succeeded has to do with how each player sacrificed individuality for team play. It's an age old lesson, that when placing team first, anything is achievable.

While watching Game 6 on Tuesday, a friend of mine asked me which two NHL greats' talents I thought best comprised what Sidney Crosby was all about. I surprised myself with how quickly the reply came. Gretzky vision, and Messier - like determination and competitiveness. Nothing less.

I first heard of Crosby when everyone else did, back when he was a 14 year old sensation garnering headlines from Cole Harbour, Nova Scotia. Soon, I found myself reading all I could about the extraordinary kid, and it wasn't his scoring and exploits that convinced me then that Sidney would one day win a Stanley Cup. 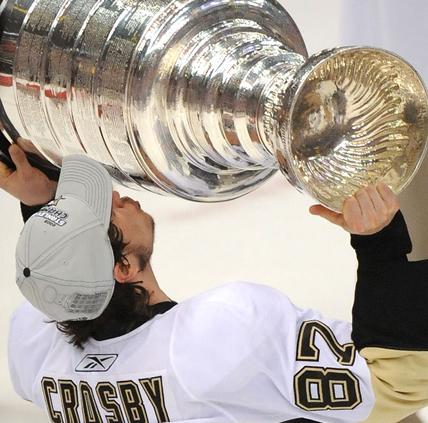 What truly had me believing, were testimonies of Crosby's dedication and desire, tales of how he treated people around him with astounding respect, an incomparable understanding of the game at an early age, and the appreciation of his God given gifts. Even before Crosby became a QMJHL sensation, I recall reading a piece on him in which he spoke of the neccessity of every team member stepping up for a group to succeed. Coming from a young kid that could practically do it all on his own, those words stuck with me and gave me the impression that his talents were exceeded by traits of character and conviction rarely seen.

At sixteen, Sid the Kid oozed leadership. Some of the first complete games I watched Crosby play were with the Rimouski Oceanic as a 17 year old. While his team came up short in the Memorial Cup run, there was little doubt of his complete talent and moral fibre package.

Once Crosby had joined the Penguins, one of my favorite reads on the teenager, was one in which it was told that at season's end, he handed envelope tips to all the Pens dressing room staff. The bonuses were Crosby's way of letting the folks behind the scene know that their work was appreaciated.

One name came to me, at the notion of such a gesture: Jean Beliveau - it is something he would have done!

Looking back, was it really foolish for former coach Therrien to name Crosby as an assistant captain and team captain so soon? Many thought that those symbolic gestures were bad moves. Me, I thought that Team Canada GM Gretzky not including Crosby on the 2006 Olympic team was a screwup.

A few random thoughts now, directed to the Canadiens, concerning the Penguins. From Montreal to Pittsburgh, there are several historical connections and coincidences of note, that are just too curious to pass over at this time.

Bylsma is the first rookie coach to win a Cup since Jean Perron guided the Habs to the 1986 Cup win.

Bylsma is the first mid-season replacement coach since the Canadiens Al MacNeil in 1970-71 to take over a club and bring it to a Cup win. Like MacNeil, Bylsma came back from being down 3-2 in games to win in seven.

The Penguins first two Stanley Cup wins were all about Mario Lemieux - a born and bred Montreal native. As everyone knows, the Magnificent One also helped save the Penguins franchise from extinction.

From NHL bottom feeders to last year's Cup final, the Pens were guided by former Habs coach MIchel Therrien - an unsung hero who may just be grinding his teeth today. Again, Therrien's credit is a lost story in this Cup win.

Thanks to Therrien, the Penguins have what is likely the highest proportion of contributing Quebecois talent on an NHL team. That is of no small consequence, as without Therrien at the helm, it is doubtful a player such as Maxim Talbot gets more than a fair shot to make the NHL.

After their 1991 Cup win, the Penguins lost head coach Bob Johnson to cancer. Johnson's death at the time, remains perhaps on of the most bittersweet tales in NHL history. The Penguins ought to have been morally decimated by Johnson's loss, but fortunately had former Habs coach Scotty Bowman ready to fill Johnson's shoes. They won again in 1992.

Lastly, and somewhat facetiously, the last time the Penguins won the Cup, the Habs won the following year.

I doubt history is about to repeat itself, but the Habs did hire a former Jack Adams winning coach named Jacques that summer.

Like Sidney Crosby - who hoisted the Prince Of Wales trophy two weeks back - I'm not big on superstition.

Neither was captain Guy Carbonneau, sixteen years ago, in May of 1993.

This third Stanley Cup for the city of Pittsburgh seems less like a culmination of a season, than it does the beginning of a long run at the top.

In mangling the motto of the great Bob Johnson, allow me to suggest that this is not only a great day for hockey, but that it is a great time to be a hockey fan!

Congratulations to the city of Pittsburgh and all Penguins fans.