Maxim Lapierre, More Bang For The Buck Than Sidney Crosby

Share All sharing options for: Maxim Lapierre, More Bang For The Buck Than Sidney Crosby 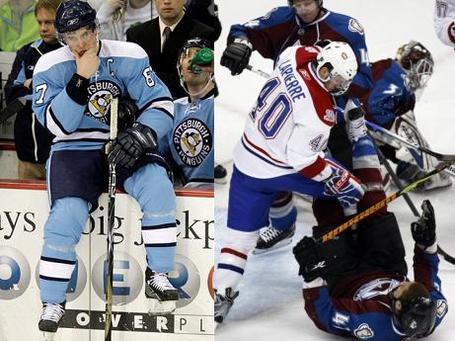 In Canadian Business.com's third annual "Hockey's Most And Least Valuable" rankings, Lapierre, onetime QMJHL shadown and thorn to Sid the Kid, comes out with a better point per dollar paid ratio than the Penguins superstar.

Of course, the notion that Max is in anyway superior, would have the Habs pest laughing at the thought.

It's the old saying of being able to read just about anything into a statistic or survey all over again.

Lapierre ranks 26th in value versus points. As for Crosby, there are 244 NHL'ers who have played a minumum 60 games offering a superior bang for the buck.

In the site's introductory pages, there are disclaimers of sorts, that should be given a look before reading too much into the rankings. One such statement reads:

Where do the stars rank? Pretty far down the list. Alexander Ovechkin is No. 237 when it comes to salary per point; Sidney Crosby is No. 245. And in terms of salary per minute of ice time, Ovechkin is No. 293, two spots ahead of Crosby, right near the bottom of the ranking. That doesn't make them less important players. After all, every team needs a star, if only to attract fans, but fans actually like teams that win even more.

The Canadian Business.com's categories include ranking for dollars versus time on ice, per game, per goal, and per point. At the site, you can click on the links atop each column for individual breakdowns.

Highlighted below, are the point per buck rankings of Canadiens players among their league counterparts. Click on each scan to enlargen them. 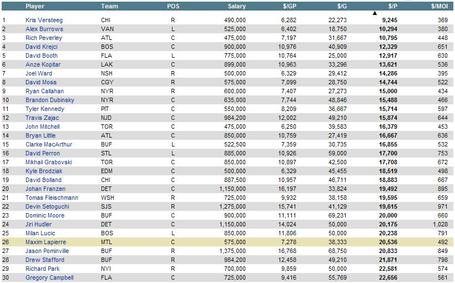