Gainey Breaks The Mold, But In Martin We're Not All Sold

Share All sharing options for: Gainey Breaks The Mold, But In Martin We're Not All Sold

Leave it to an outside the box thinker like Bob Gainey to hire a coach who was practically off the radar, as far as prospects to coach team goes.

Jacques Martin, who has all the credentials Gainey was looking for, was employed until yesterday, as the GM of the team that equalled the Canadiens in the points standings this past season. What rabbit Gainey will pull from his hat next remains to be seen, but this move definitely qualifies as a shocker.

I've never been a big fan of Martin, based primarily on my own personal bias from having met him more than once while he coached the Cornwall Aces. My take was that I didn't find him to be an entirely outgoing individual, intent on discussing anything with a fan in the street, or in my case the local Canada Post depot, or neighborhood grocery store. In a word - smug!

But that was my problem then, not his now.

Martin is a very good coach. Incompetent coaches don't last 14 seasons behind NHL benches. There will be legions of Canadiens fans who will not subscribe to his style, game plan, treatment of players, the dryness of his approach with people, or his lack of discussing his outlook on subjects at length.

And that won't be his problem either.

As Gainey explained more than once, during a press conference that can be heard here, Martin fit the bill for the Canadiens in a multitude of ways. 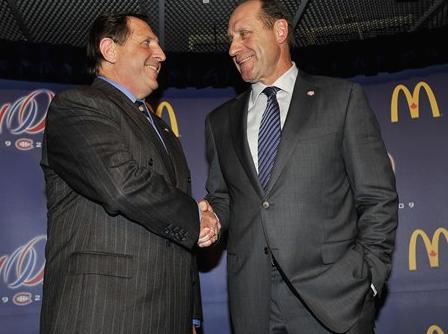 Martin has the required coaching experience in spades, being 10th in the NHL in all time wins.

He's seen just about every possible game scenario unfold before his eyes.

He is committed to results and preaches responsibility on both sides of the puck.

He's not married to a pre - game plan and can adjust and coach on the fly, a big lacune in his predecessor's bag of tricks.

Martin is especially strong in the area of developing younger players and grooming them into seasoned pros who play well with a system.

His teams, when they have been at their best, were excruciatingly difficult to play against. Some term his approach as boring or even annoying, but evidence shows that most Martin coached teams were fairly savvy at putting the puck in the net.

In Montreal terms, Martin fits the bill as he is from the region - loosely - and speaks the language.

Approching an off season in which the team faces free agent isues - some their own, some prospective - the Martin hiring serves notice that the Habs are in business, at serious at it, moving forward.

Additionally, Martin fits in well with the organization, as there are faces familiar to him in every department of the club's hockey operations.

Not mentioned in the presser, is the fact that Martin is not a former NHL player. Some will see that as a knock, some a bonus. Players often look for understanding from coaches who are not too far removed from the player's lifestyle. Perhaps, former players turned coaches are too close to players in that sense, and authority is often breached. Having a coach that is not from that line may help the Canadiens establish a stronger sense of authority on the team, when it regards the off ice behavior of players.

Martin is in for a tough haul behind the Canadiens bench. Not everyone likes him off the start, but he pulled off a fairly good sell to launch his era at the Bell today.

Part of what put a smile on my face, were his allusions to the Detroit Red Wings, a team that can play it both ways - exciting and boring while winning. Making the Canadiens players responsible like those in the Wings camp is an astute restarting point for the Habs, who are in need of an identity makeover, or at least a strict fine tuning.

That Martin is much better at winning than being the life of the party bodes well. The Canadiens could have done a lot worse picking their newest coach from lists bantered about it the media. Of a potential list of coaches known for their flair and personality, Gainey chose off the list, one with neither of those attributes. After this past season, the flair might best be left to players.

Some credit must be handed to Gainey for finding the most experienced coach he could, but we will all like this move and Martin a whole lot more after a six game win streak than some of us do presently.

There's an old saying in Montreal, that coaches are condemned to win.

Martin is so far undeated on Day 1 of condemnation.