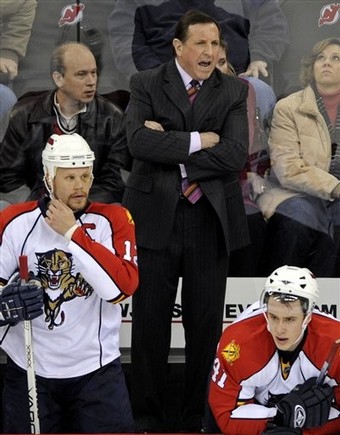 What was hinted at yesterday by Sportsnet, and this morning at Habs Inside Out and the Gazette, is now coming to fruition. At 2 P.M. to day, Canadiens GM Bob Gainey will announce Jacques Martin as the team's new head coach.

Don't feel bad, you're in with the majority of Canadiens fans who were expecting perhaps a more spectacular unveiling.

Martin is a demanding, defense first coach, with a strategy founded in the trap system. A Peterborough Pete alumni, Martin is on his sixth NHL stop after various positions in St. Louis, Chicago, the Nordiques organization, the Ottawa Senators where his greatest successes were, and most recently in Florida, where he was the team's GM following a two year stint as coach.

While he most definitely fills the requirement for an experienced bench boss , there are both upsides and downsides to this hiring as I see it.

First and foremost, Martin does not seem to suit the Canadiens prefered style of exciting offensive hockey. Perhaps this is asign that the Canadiens will not have the same look next season due to their myriad free agency issues.

Then again, maybe they will be targeting Jay Bowmeester?

Additionally, Martin, who has a reputation as a solid teacher, is reputed to be somewhat of a dry communicator, fitting right in with the mold of Gainey and Pierre Gauthier who hired him in Ottawa. Martin will be rejoining both Gauthier, and former Ottawa scouts Trevor Timmins and Frank Jay in the Habs organization.

The french media will love the guy, until they start having trouble getting colourful quotes from him.

We are now about an hour or so away from hearing Martin profess that coaching the Canadiens have been his life long dream job.

I will have more on this later today, after the press conference, which you can see here from RDS.

Below are Martin's career stats, beginning with his time as a goaltender with the NCAA St. Lawrence Saints. I'll be sure to dig up a few tales wfrom his days behind the Cornwall Aces bench. 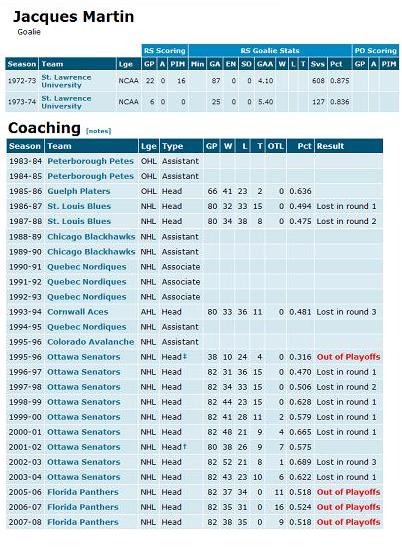