Share All sharing options for: Five Quick Seasons is All it Took for Bruins' First Stanley Cup Win 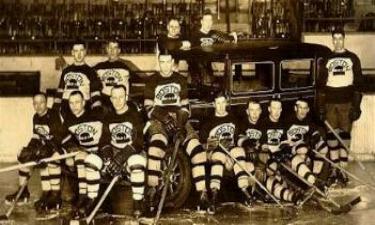 When the NHL formed in 1917, the Boston Athlectic Association were the defending American Amateur Hockey Association champions. As the Boston area was already a hockey hub, it was only appropriate that the Boston Bruins would become the NHL's first American franchise.

Grocery store magnate Charles F. Adams had sponsored an amateur team in Boston, but became disenchanted when he learned that rival clubs were in fact paying their amateurs through gratuities. With the Boston area ripe for pro hockey, Adams was lobbied by a group of hockey cognoscenti from north of the border than included Montreal's Tom Duggan and Ottawa's Frank Sullivan, and they wanted to have Adams see NHL hockey first hand.

Adams was immediately sold on NHL hockey, upon being brought to Canada to witness the 1923-24 Stanley Cup Final between the Montreal Canadiens and Calgary Tigers. Sensing the allure of players such as Howie Morenz, Georges Vezina, Aurele Joliat and Sprague Cleghorn, Adams arranged for an exhibition match in Boston featuring the Canadiens, and the enthusiastic fan results convinced him to successfully bid on an NHL franchise.

The grocery tycoon wasted no time in assembling his hockey brass. On his trip to Canada, Adams had met early hockey legend Art Ross and took a liking to him. He soon named him as the club's coach and manager. Adams named the team the "Bruins" and they would don uniforms in the yellow and brown colour scheme of his First National Grocers store chain.

The Boston Bruins were not the only club to join the NHL in 1924-25, as a nameless Montreal club, representing the English population of the city gained entry to the league as well, bringing the NHL to a six-team league.