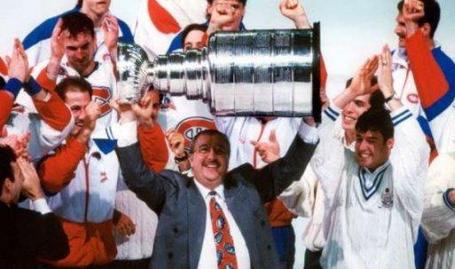 At RDS this past week, former coach Jacques Demers pronounced his thoughts on how he'd handle the Canadiens 10 free agents and the manner in which he would reconfigure the club's composition for next season.

Demers listed the players he would resign and why, who he would trade away, and which players he would acquire via trades and free agency in trying to rebuild the team. The choices somewhat mirror a small fraction of popular opinion, in that it resembles some of what is being said about individual players and the team as a whole by fans, media, and consensus onlookers.

Here are his ideas, translated from the RDS post, followed by what I think of each.

Koivu has given an awful lot to the Canadiens and he'll be 35 in November. Because of health concerns and injuries, it is as though he has the body of a 45 year old athlete. He's never shortchanged the Canadiens with his effort on the ice and he deserves to be appreciated elsewhere. In my thinking, it might be best for him to leave the scene.

Demers fails to note that this so called 45 year old athlete finished second in playoff scoring and hit Zdeno Chara in the first round more often than a slew of less courageous bodies. Still viewed by too many for what he is not as a player, rather than for all that he is, I still believe Koivu is a keeper for two more seasons. It is true that he tends to max out after giving it his all after 16 to 18 minutes, but a better supported Koivu would offer a generous upside on his usually consistent output. The two week tease of him productively centering Kovalev and Tanguay begs for further investigation. The bottom line in going forward with Koivu, depends largely upon the club bringing in a center capable of assuming a larger role than either Plekanec or Lang were able to provide this past season. The former's regression, and the latter's mid season injury, placed undue focus on Koivu, highlighting once more, for cynical viewers, that too much is being asked of him. His shortcomings should not be confused with the failures of others. On a whole other matter, having a European captain play his entire career in Montreal and retire a Canadien has unspoken dividends against several arguments concerning playing in the city for this organization. The respectful thing to do would be to allow Koivu to determine his own fate by putting his asking price on the table. If it were to be a fair demand, sign him. If otherwise, allow the long standing captain of the team a window of opportunity between now and July 1 to say a proper "so long" to Montreal on his terms. Koivu deserves the most dignified of partings, should that be his choice. It would be no less than heartbreaking to see him in any other jersey than that of the CH, playing out the string.