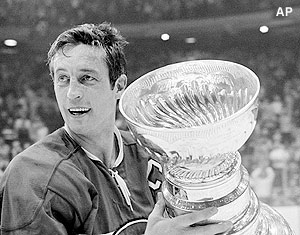 There are always plenty of great reads at my favorite historical hockey site Greatest Hockey Legends, and lately Joe has been posting a series of Stanley Cup legends stories that coincide with current events, such as the ascension of Steve Penny, when talk revolved around Washington's Simeon Varlamov or mentioning the Red Wings Darren Helm in the same breath as that long forgotten Habs post season pinch hitter, Eddie Mazur.

Each month, Joe posts Canadiens related stories, but he has outdone himself once more in the past few weeks. In addition to stories mentioned above, there have been looks back on the post season exploits of Jean Beliveau, Frank Mahovlich and Gump Worsley.

The Beliveau piece is an especially interesting read. Le gros Bill was the first winner of the Conn Smythe Trophy, as the NHL did not award a post season MVP from 1918 to 1964. A link further down the post takes readers to reconstituted listing of which players were playoff MVP's for those years. The list was composed by the Society for International Hockey Research's Ernie Fitzsimmons, a man who knows his stuff.

GHL also had a piece on Slava Bykov, the Russian coach who was rumoured to have been interviewed for the Canadiens vacant coaching position.

GHL has always done excellent work placing the present into the perspective of the past, and making relevant comparisons. Did you know that Sidney Crosby is on tarhet to take a run at Reggie Leach and Jarri Kurri's playoff goal scoring mark?

Check it all out at GHL and chances are you will leave the site more intelligent than when you arrived.