Be On The Lookout For Habs Fan Scammers

Share All sharing options for: Be On The Lookout For Habs Fan Scammers 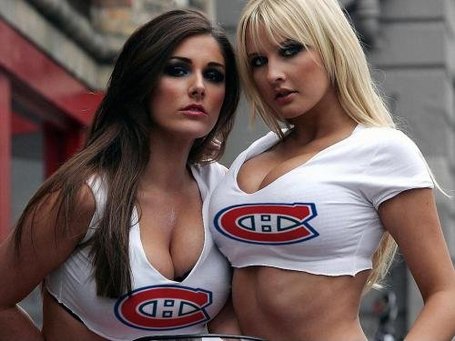 I was caught completely by surprise, so don't be naive enough to think this couldn't happen to you or your friends.

There's this scam involving Habs fans has been happening at some local Jean Coutu stores in Quebec and Eastern Ontario of late, and as I was victimized a few weeks back, I though I would warn as many people as possible. The scam has apparently now moved on to Home Depot outlets. Consider this a heads up for regular Jean Coutu and Home Depot customers.

The scammers are a pair of 22 year old female Habs fans, who both dress in skimpy low cut t - shirts adorned by the Canadiens logo. Upon leaving the establishment, they immediately catch your eye - how could they not!

They are scantilly dressed and they will follow you to your car and as you unpack your purchases in your vehicle, they begin to wash down your windshield with Windex, rags and a squeegy. In my case, they did not allow me to drive away, as when I climbed into my car, the pair were stretched across the windshield, wiping it down in a very revealing manner.

It's almost impossible not to be sucked in to what happens next.

I've encountered squeegy pests before, and usually rid myself of them with a simple toonie tip, but these two are after a little more. They refused my change, and instead asked for a ride to the nearest McDonald's restaurant.

Fair enough, you think....but this is where you get hooked.

As you begin to drive off, with one young lady beside you and the other in the back seat, the girls begin to strip down, rubbing themselves against you as you try to drive. The girl in back will rub or kiss your neck as you are distracted, and their four hands are all over you.

Of course, any safe driver would pull over at this point, and when I did, the girl in the back grabbed my wallet and the pair made off with it.

This wasn't a one time occurance.

I had my wallet stolen on the April 24th, the 25th, twice on the 26th, and everyday since.

The good news is that wallets are available at Wal - Mart for $2.99 - cheaper than Jean Coutu.

Just incase this happens to you...don't say you haven't been warned.