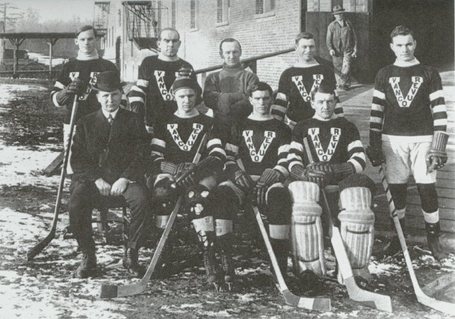 While the Vancouver Canucks' pursuit of their first Stanley Cup continues, West Coast hockey fans might not know that the city of Vancouver once hosted a Cup champion back in 1915.

Back in the formative days of professional hockey, the Vancouver Millionaires, founded by brothers Frank and Lester Patrick and their father Joe, became a hockey powerhouse.

The story of the Patrick family's building of the game of hockey in Western Canada is hockey history at it's most brilliant and breathtaking, and their stamp on the game is immeasurable to this day.

Lester Patrick had been a great rover and defenceman who first came to prominance in 1900 when he played for McGill University. In 1904, he was the star for the Brandon team in the Northwestern and Manitoba Hockey Leagues and became the first defenceman known to score a goal. With Lester, Brandon challenged the Ottawa Senators for the Stanley Cup in that season, but were beaten badly in the series. Lester Patrick would have more success with the famed Montreal Wanderers in the 1906 and 1907 seasons. Scoring 41 goals as a rushing defenceman in just 28 scheduled games while serving as captain of the Redbands, Patrick led them to the Stanley Cup in both seasons. He was the signed as a high priced free agent by the Renfrew Creamery Kings in the NHA's first year of operation.

The Vancouver Millionaires franchise had it's origins in Renfrew, Ontario in 1909, on a team then known as the Creamery Kings of the National Hockey Association. The Ambrose O'Brien owned club were nicknamed the Millionaires after it began paying salaries between $3,500 and $5,200 to stars such as the Patrick brothers and Fred "Cyclone" Taylor.

In 1911, the Patrick family sold it's profitable lumber company, and moved out west to capitalize on an exploding hockey scene ready to be mined for gold. Not long after setting up shop out west, the Patricks endeavored, not only to build a strong hockey club, but also to prop up the entire hockey scene, building leagues and arenas, which they would manage along with the respective clubs that they would own.