I will subtitle this piece, "Brushes with Hab - ness, media - ness, and wonderful day of learning about people involved in the game of hockey, while somehow losing my tour group inside the Bell Centre". This will be a lengthy, but worthwhile read for regulars of this site or anyone inquisitive of hockey behind the scenes. I sincerely hope that it captures something for you that enriches your hockey knowledge. My May 16 day at the Bell Centre, in the company of SIHR members, NHL alumni, sons of former Canadiens players, and Habs media was as enlightening a day as I have ever lived. I hope that you can share in the enthusiam of what I have learned. Your comments, each and every one, are welcomed, and will be personally addressed.

Six months ago, when I first became a member of the Society for International Hockey Research, I never envisioned a day quite like this past Saturday. For a fanatic of the game and it's origins, the 10 hours spent inside the Bell Centre were an eye opener and a jaw dropper all in one. I had a great time!

It's one thing to be in a room with 55 other like minded hockey fanatic souls, and it's entirely another feeling to be dwarfed by both their presence, knowledge and respect for the game of hockey. Amongst them, I was meek, to say the least.

For those unfamiliar with the SIHR, it is a fast growing network of writers, former players, statisticians, collectors, broadcasters, academics and just plain hockey buffs, who have been practicing their hobby, pretty much in isolation for years. 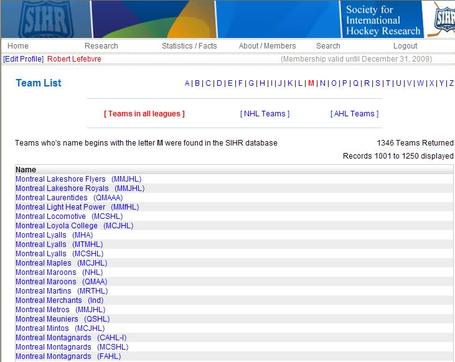 The Society is a non profit organization which is entirely operated by members who volunteer their time. Through membership dues, donations and grants, the group produces newsletters, the annual journal and maintains a web site. Their mandate is to promote, develop and encourage the study of the game of ice hockey as a significant international athletic and popular social institution; to establish an accurate historical account of hockey through the years; and to assist in the dissemination of the findings and studies derived from research. 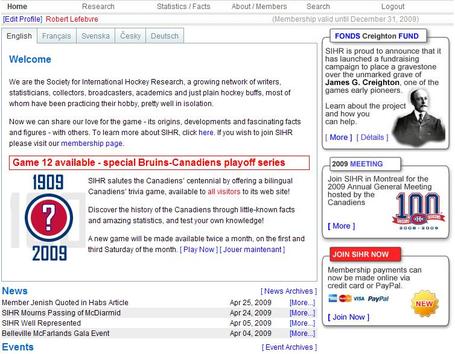 The web site is absolutely atounding. There is no other comparable hockey player and team database as voluminous on the internet. At last count, the site features 15,161 teams and 117,630 players profiles from every possible corner of the globe. The SIHR's Ernie Fitzsimmons enters the majority of site data, and he is a stat maniac with few peers.