This Is What I Call Hockey Fans

Share All sharing options for: This Is What I Call Hockey Fans 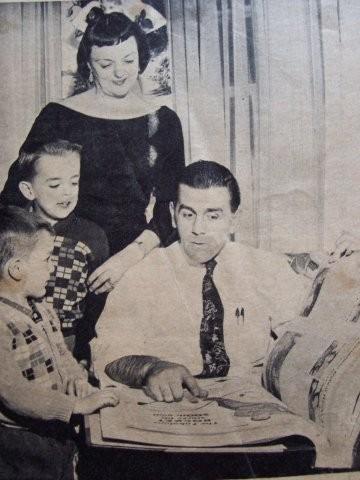 It's a shame this type of innocence is sometimes lost in the fandom of sports, but this man and his two boys have nailed what it is all about. Perhaps a lot us of kept Habs scrapbooks as kids. I've saved a bunch of clippings and momentos myself. This family's dedication to scrapbooking the Habs 100th season is impressive. Dennis Kane, a superfan himself, from whom this picture above belongs to, would be proud. That's Rocket Richard, pictured with his sons, looking through some paper clippings. Dennis and his Dad did the same, as you can see here, here, and here.

I do not have any sons myself to do such a scrapbook with, but I have a nephew named Dylan that eats the Habs for breakfast, dinner and supper. I'll see to it that he gets every stitch of Canadiens related stuff I own one day. The last time I saw Dylan, I was at my brother's place to cut some wood. The Canadiens had just been eliminated the day before, and Dylan was watching the 10 Memorable Games DVD I had given him for Christmas. He was watching Game 7 of the 1979 Stanley Cup semi finals, where Don Cherry's too many men boob helped the Habs win the Cup.

Dylan is ten years old, and spends a great deal of his time talking and learning about hockey from his father.

Between this Jason Glazer fellow profiled at the Gazette, Dennis, and Dylan, I should buy a scanner and start posting my collection. Maybe together we would inspire a few more fathers and sons into starting a massive album of cherished memories.