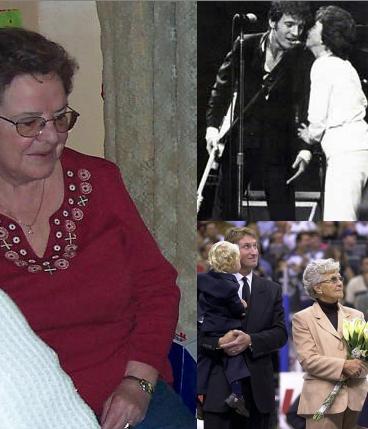 It's Mother's Day today and we all know that mothers are awesome. You literally cannot live without them. All Mom's go about a trillion daily tasks in raising children, greatly affecting the very existence of their being in manners too numerous to list

Some Moms' small simple gestures end up changing the world. Like Adele Springsteen buying her son a $12 Japanese guitar in 1964, figuring it wouldn't amount to much. Or like Phyllis Gretzky driving son Wayne to early morning hockey practices countless times, becoming part of her child's infatuation.

Shirley, my mother, was not so much a hockey mom, because I never was much of a player to begin with. Playing, for me, came later in my teens. She was more of a hockey mom to my daughter, driving her to games and practices when work kept me from doing so. As a hockey grandma, my kid gave her all kinds of memories and big goals to brag about.

I do have one hockey story that involves my mother, back when I was about 10. I'd just gotten my first pair of skates, and Mom would lace them up for me, and I would walk on my skate guards to the rink at the end of my street, where I would learn how to get up off of my ass a zillion times. Mom didn't cherish tying my skates much, because one time, I accidentally gave her a fat lip for her efforts.

Mom, kneeling down in front of me on the stairs, would tie the laces as tight as she could, and this one time she pulled the laces up when I wasn't paying attention and keeping my foot down, and the skate toe came up and kicked her right in the lip. I thought she was going to roll down the stairs.

So I wasn't destined to be Gretzky. She bought me my own little Japanese Zellers guitar when I was 12, and while I might have learned to make it talk, I never had a Springsteen - like vocabulary with it. But I know more chords than Gretzky, and I'm sure I could deke the Boss a cup of coffee one on one in a hockey game.

One gift mom gave me, she didn't have to purchase - storytelling. Maybe it was in the ancestry of Brown family immigrants, but Mom can spin a yarn to no end. Stories of every kind, all the time. It's something I recognized I had from her from a very early age, and long before I applied it to hockey knowledge, it has transferred itself to all kinds of written things, from song lyrics you'll never hear to sugary, blushing love letters to girlfriends that would probably be worth something on E-Bay.

My father's love of hockey and the Canadiens, combined with my mother's gift of gab, are at the root of everything posted here.

Of course, moms pull off all kinds of other life altering chores that go subtly unoticed in a lifetime, such as working 101,348 hours over 40 years and cooking 25,000 or so meals, along with the verbal straightenings that come with messing up, and the hugs and reassuring words that let you know that thinks you can do just about anything.

I know a few fellows my age, that have lost their moms early in life, and a bunch more who have lost them recently. The inevitabilities of life make us appreciate things more, as time passes.

For all my life it seems, I've listened to the Boss and watched the Great One's amazing exploits. Only now, I'm not talking about Springsteen and Gretzky!

Many more Happy Monther's Days to you, Shirley Brown Lefebvre.