The Red Wings First Stanley Cup One For The Ages

Share All sharing options for: The Red Wings First Stanley Cup One For The Ages 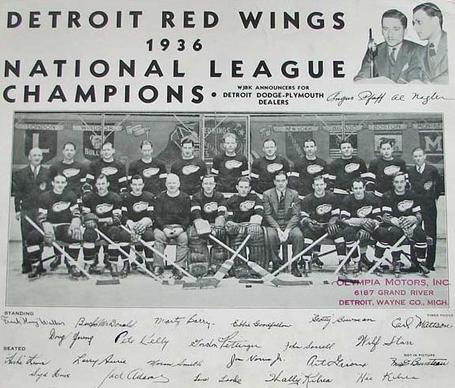 The roots of the Detroit Red Wings team go all the way back to the old Western Hockey League, where the Victoria (British Columbia) Cougars were members until their complete roster was sold to a group of businessmen from Detroit on September 25, 1926. The group, led by former NHL goalie Percy LeSueur and Charles King, were one of 11 bidding to bring NHL hockey to Detroit. They were awarded an NHL franchise on May 15, 1926.

The team began play as the Detroit Cougars in the fall of 1926, while playing its home games in Windsor, Ontario awaiting a new arena to be built. Despite the fact that the Cougars had won the Stanley Cup in 1925 and were Cup finalists a year later, the 1926 Detroit Cougars finished with an 12-28-4 record, rnking last in the NHL that season.