Share All sharing options for: Guy Lafleur Shafted For Stickhandling In Court 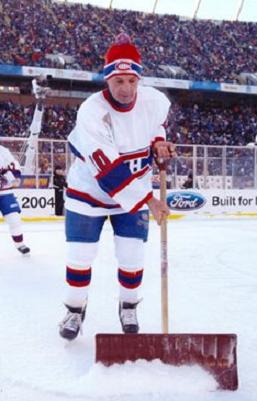 This Guy Lafleur conviction for giving contradictory evidence in a bail hearing for his son is a load of bullcrap.

For failling to tell the court that his son spent two nights at a motel, Lafleur is being charged with obstruction of justice.

What is completely ridiculous in this, is that Lafleur seemingly perjed himself by offering the contradictory evidence after first stating that his son obeyed curfew, before noting that he'd stayed at a motel for two nights.

Lafleur argued that he misunderstood the original intent of the question.

The judge in the case, did not buy that argument.

The misunderstanding is completely understandable from the point of view of a former hockey player who must have had to abide by say, maybe 500 motel or hotel room curfews on the road during his career!

Doesn't that fact buy Lafleur an ounce of clemmency from his self perjing words?

It ought to have been worthy of a good courtroom cackle, and nothing more.

In sentencing arguments, crown prosecutor Lori Weitzman said just because Lafleur is a public personality, he shouldn't be treated any differently than anyone else who lies to the court. Justice has to be applied equally."

Well isn't that a lie in itself.

Treated equally? Lafleur is being made an example and is countersuing.

From the get go, Lafleur never denied that he inadvertantly made the false statement, and admitted than he was at one time confused by the question of the curfew.

Now his crime is in misunderstanding a question.

When first arrested, did the court issue a simple summons to Lafleur?

No, they simply had police show up at his home at take him away in cuffs.

Another fine example of an unjust justice system!