If I Weren't A Canadiens Fan

Share All sharing options for: If I Weren't A Canadiens Fan 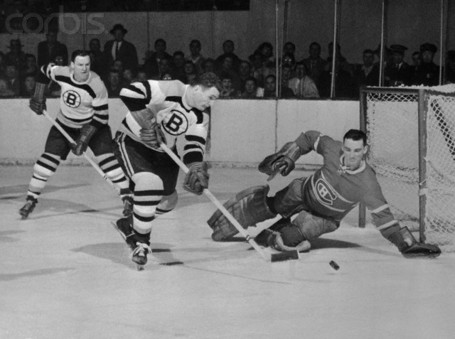 If I weren't a Canadiens fan, I could be a Boston Bruins fan. I admire their spunk, if that's the right word. I admire that they are a rabid and enthusiastic fanbase that believes and supports their club to no end. I like that they stand for tough hockey. I like the colour scheme of their uiniforms. I loved classic games in the Boston Garden for three decades. A different game - and it's missed - was played on Garden ice in the Bruins heyday.

The city of Boston knows both sides of the winning equation. The Celtics have dominated the court as the Habs have dominated on ice. The Red Sox - my favorite ball team since the Expos were ixnayed - suffered for 100 years before the 2004 classic undoing of the Yankees. Who couldn't love that moment in sport? The Bruins fit somewhere in the middle of the ball teams.

If I weren't a Canadiens fan, I could be a Boston Bruins fan because when I first became aware of the great game of hockey, it was Orr's name who was on everyone's lips. I'd heard more about Bobby Orr than I'd seen by age eight, but the more I would see and hear, made me want to be a fan. 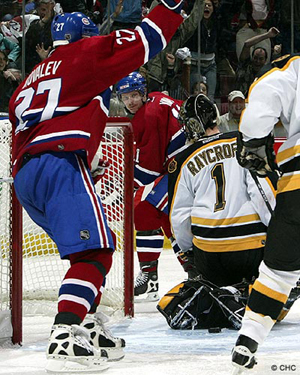 Canadiens games around 1970, were broadcast into our living room regularly, but seeing Orr go airbound upon scoring a Cup winning goal in overtime has a lasting impression. It still perplexes me that I watched that game in colour, yet all the classic photos of that moment are in black and white.

What swayed me, eventually, was simply that I was able to watch the Canadiens games more often. It was hard not to fall in love with Dryden, Lafleur, the Pocket Rocket, Roadrunner Cournoyer when seeing them so regularly.

And that's simply what happened. I didn't make a conscious choice. It was more like the choice chose me. It's a lot like not being able to pick where you are born. No one chooses their parents, their siblings, their hometown.

I'm glad that I remember those days of youthful innocence so clearly, because it serves well to temper my hockey fanaticism today. Since 1969, when I was going on seven years old and hockey was on the TV, I've been lucky enough to see the Canadiens win nine Stanley Cups. Lucky, because I was born where I was.

Cornwall, Ontario could just as easily been Cornwall Connecticut.

The bottom line is, where you happen to be born doesn't make you any better than someone born someplace else. Those nine Habs Cups - I didn't have a damn thing to do with. I just watched, and at best, learned. 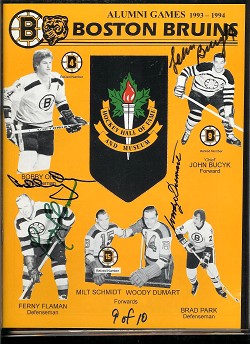 The Montreal Canadiens have not won a Cup in 15 seasons. It's about to become sixteen years.

I'm not sure how I could handle Stanley Cup droughts of 31 and 37 years, but I gather one can get used to anything. People get used to being in prison to the point where they commit crimes in order to return there. That's no analogy. It's the truth.

For me, I don't think I could stay interested that long.

My very first friend in life was a four year old boy named Brian Seguin. Brian lived across the street from me when I was six. Brian and I caught the Orr fever at about the same time. Despite our francophone surnames, the Seguins were an english speaking family. Needless to say, Brian remained a Bruins fan.

He moved away to the country and his father's farming roots in 1974. He was ten and I was twelve. We are no longer close, but when we occasionally meet, the old friendship is still there. After he moved away, we did not see each other until 1986. I cannot recall how it happened, but we ended up going to the Forum to see the Canadiens and Bruins play Game 1 of the first round of that seasons playoffs. 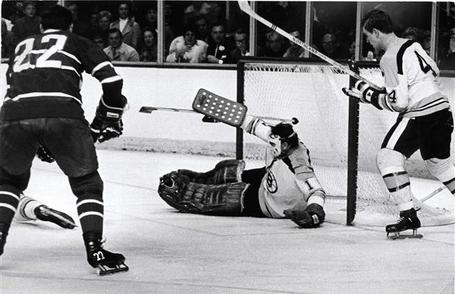 Fans with a vivid memory might recall that as being Patrick Roy's first ever playoff game. I still have the ticket stub somewhere. It was also the same game where John Kordic pounded the snot out of the Bruins Jay Miller. As Miller was expelled from the game, he left the ice mad as hell, and kicked a spring loaded door on his way to the dressing room. The door sprung back at Miller with equal force, knocking him on his derriere. I remember standing next to Brian watching this from the highest levels of the Forum on chevron shaped screens that hung behind the pressbox.

Brian cupped his hands to his face in mock embarrassment while I quietly howled in laughter. Quietly, because we were situated in a section full of Bruins fans who had bussed in from Boston.

The most memorable part of the evening happened when we left the game. Two Bruins fans seated behind us had tickets for Game 2, but couldn't make it. They were offered to us somehow, and Brian and I looked at them dumpfounded, not believing our good fortune. We got to do this all over again the very next night.

I don't recall ever seeing Brian again until the fall of 2007. It's not like he hadn't been on my mind, as I had worked for an employer of the same name for two years. The occasion was a girls travel team tryout for our daughters. I was thrilled to see him there. It happened that both our girls were trying out for the same team. Before realizing that each others daughters were on the ice, we reminisced a bit.

He was still a Bruins fan cussing the Habs.

As we stood watching the girls run through on ice drills, I pointed out a player who stood taller than the rest. Much taller. I remarked that she seemed awkward for her height, but clearly had skill and upside for a patient coach.

It was Brian's daugther.

At that moment, a former team mate of my offspring, whose tryout was next, asked if I could tie her skates. As I turned away to help, Brian remarked that he'd just seen his first bodycheck in girls hockey. I noted that all's fair in tryouts, as no penalties could be called.

When I finished tying skates, I asked Brian who the goon was, and he pointed to my daughter. We had a good laugh then, or at least I did.

I ended up that Brians girl, one year my daughter's junior, didn't make the cut. Man was I pissed. Had coaches based appraisals on potential, she couldn't have been missed.

Such is life - such is hockey!

At that moment, a former team mate of my offspring, whose tryout was next, asked if I could tie her skates. As I turned away to help, Brian remarked that he'd just seen his first bodycheck in girls hockey. I noted that all's fair in tryouts, as no penalties could be called.

When I finished tying skates, I asked Brian who the goon was, and he pointed to my daughter. We had a good laugh then, or at least I did.

I ended up that Brians girl, one year my daughter's junior, didn't make the cut. Man was I pissed. Had coaches based appraisals on potential, she couldn't have been missed.

Such is life - such is hockey! 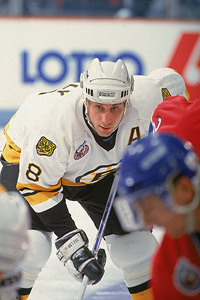 My girl made the cut, but has stopped growing and after three seasons on elite teams. Still under five feet tall, and destined to stay there, she may have to settle for tearing up house league unless she grows.

Brian is not the only Bruin fan from around here, but he would have been 8 years old in 1972. Thirty seven years later, he's still a fan, no doubt about it. In his household, his choice was between Toronto and Boston.

Soon the hockey tryouts will begin again. I'll have to warn my little Theo Fleury to be careful in the corners with Zdeno.

If I weren't a Canadiens fan, I guess I would have been a Boston Bruins fan, except that a tall foiler named Ken Dryden decided I wouldn't in the spring of 1971. 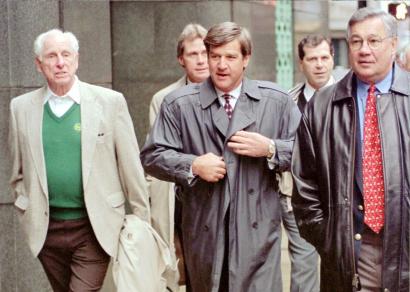