Share All sharing options for: Opportunity Slipping As Frail Habs Fall To Rangers 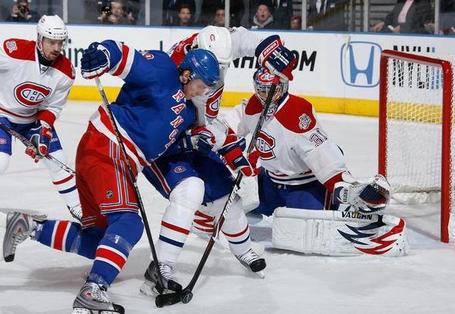 The Canadiens, in losing 3-1 to the New York Rangers, may have allowed their best chance to clinch a playoff position slip through their fingers.

In the Big Apple, the Canadiens stepped on a banana peel

As desperate as the Canadiens are to earn a single point and clinch, the Rangers played as though desperation was the only motivating factor they needed. Hampered by the losses of defensemen Markov and Schneider, the Habs look like a team hobbling on a crutch.

From a recent four game win streak, nothing about the Canadiens looks recognizable of late. Montreal looked sluggish against the Rangers, and after a fairly even sided first period, were completely outplayed by New York. In the final 40 minutes, the Rangers outshot the Canadiens 34 to 14.

The Rangers effectively did what they needed to do to beat Montreal. They consistently boggled up the top three lines to the point where the Habs generated few sustained attacks. The Rangers played a disciplined game, and an excellent PK was rarely challenged by the Canadiens neutralized forces. The canadiens simply weren't up to going to battle with the Rangers with Mathieu Dandenault as their best forward of the game. 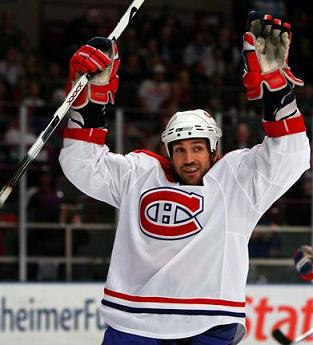 After the game, coach Gainey admitted the team had blown its wad the previous night, putting all cards on the table in hope of a win against Ottawa. He concurred the team was tired after having played three games in four nights. This was especially apparent in the play of blueliners Josh Gorges and Mike Komisarek, who had a horrid night.

Komisarek, without Markov as a partner, is sometimes an unpretty sight. The Canadiens free agent defenseman when overworked attempts to do too much. He did well in blocking a pair of shots that were sure Rangers goals, but is hardly the same steadying influence without the calm of Markov to feed off. This issue will certainly become a crux at contract negotiation time, when it's assumed that those talks will bring up the fact of his value being attached to that of Markov. It's interesting and worrisome at once.

Skating to the back boards to coil a dump in, Price encountered Avery when meeting the slow rolling puck. Avery intercepted the disc, and then interfered enough with Price - slashing him three times - as he attempted to get back to his crease. Nik Antropov was hence greeted with nothing but net to put the Rangers ahead.

The play should have been blown dead and a penalty called on the Rangers superpest. Avery was a thorn all game long, and he gets away with bending the rules because officials allow it. You have to think the NHL likes it that way. 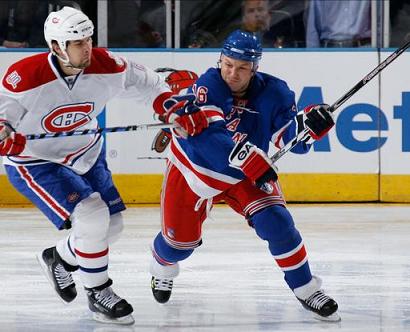 On that note, the game turned, and the Canadiens, without much offensive thump from a crippled transition game, were helpless to recover. They played as though they knew their goose was cooked.

The Canadiens now face the Bruins in Boston on Thursday and return home to play the Penguins on Saturday in their final regular season game. The task of earning a single point to clinch a playoff spot remains the same, otherwise their hopes are pinned to the Rangers and Panthers going winless over their final weekend.

The Rangers host the Flyers Thursday in the first of a home and away set that sees them play in Philadelphia on Sunday. The Panthers play Thursday in Atlanta and host the Capitals on Sunday. Florida needs all four available points to surpass Montreal.

Playing as they are, the Canadiens will be hard pressed to earn points against Boston or Pittsburgh. In regards to the Bruins whose top seed is guaranteed, Boston has little to gain in the Montreal game other than using it as a playoff tuneup against a possible first round opponant. Of course, the Bruins never need added motivation when it comes to playing the Canadiens. They would just as soon expel them with one game that deal with them in a playoff round.

By Saturday night, the playoff picture for the Penguins should be clearer. Trailing both Carolina and Philadelphia by two points, sixth place Pittsburgh could move as high as fourth with wins on Thursday against the Islanders and Saturday against Montreal. The Flyers and Hurricanes, who both play on Saturday afternoon, will each have their next two games in the books by the time the puck drops between the Canadiens and Penguins. 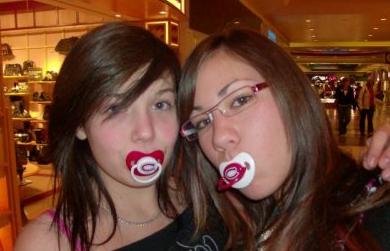