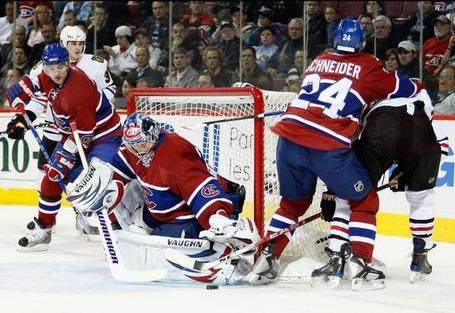 CKAC Sports has learned that not only has Mathieu Schneider made the trip to New York with the Canadiens, but that he could also be in the lineup against the Rangers, if not then Thursday against the Bruins.

On this morning edition of "Sport Du Lit", CKAC play by playman Martin Maguire confirmed to host Danile Langevin that Schneider is "not ruled out" for tonight's game, and that it is almost certain that he will play in Boston.

The Canadiens are not practicing in New York today, and will head off to Madison Square Garden at 4:30 p.m.

After last night's game in Ottawa, Roman Hamrlik was seen to have a slight limp, a result of a shot block during the game.

As far as Andrei markov is concerned, he was seen in and around the Canadiens dressing room prior to yesterday's game and did not appear to be favouring his leg or hip. He seemed to be walking normally, and it is being assumed that his injury is not as severe as earlier media reports has ascerted. Markov remained in Montreal and it remains unclear how long he will be out of the lineup.

After the game, canadiens coach Bob Gainey stated that "Mathieu and Andrei presence were sorely missed, but for the time being I cannot confirm any details."