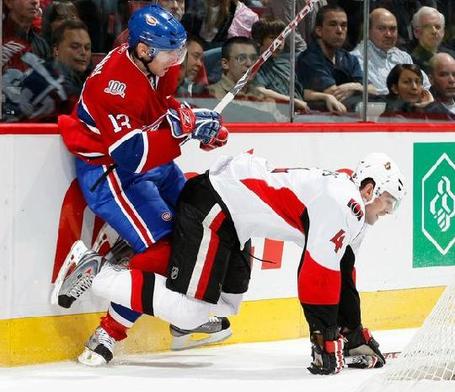 It was close. Nine minutes away in fact, and the Canadiens were in the playoffs.

Not smart was a Maxim Lapierre major for fighting in a third period that was all too close for comfort.

It would be hard to fault Lapierre, an energized, emotional instinct player who gives every ounce of himself game in, but it was the kind of game where no faults were allowed.

And that is just the thing, without defensemen Andrei Markov and Mathiey Schneider, the Canadiens are essentially forced to playing practically errorless hockey. They made a bunch of costly boobs last night, while most players can be credited with pushing to the limit.

Heroic were the efforts put in by Josh Gorges, Mike Komisarek, Roman Hamrlik and Patrice Brisebois, who all logged additional minutes and all hit the scoresheet. Their play exemplified what it means to bring it up a notch and combined with the poised play by all four lines helped keep the dangerous trio of Alfredsson, Spezza and Heatley off the scoresheet for 50 minutes. Callup Doug Janik played well despite obvious jitters, but the same cannot be said for Ryan O' Byrne, whose multiple goofs included almost scoring into his own goal again.

The loss of Markov and Schneider hurt the Habs transition game badly. For long stretches of time there was no flow in the Canadiens rushes, as many plays broke down before reaching the Ottawa blueline. A stricter concentration on coverage in all three zones by Montreal likely robbed them of better chances.

The top line of Kovalev, Koivu and Tanguay were ineffective on the powerplay, but managed to get the Canadiens on the board midway through the game. The Lapierre line were dilligently working until prnalties began to compromise their usuage. Plekanec, Higgins and Dandenault stiffled the Spezza for long periods, but a costly goof by Plekanec, who headed to the bench on the back rush, lead to the Senators tying the game.

Kovalev, the NHL's Player Of The Week, accounted for five of the Canadiens 22 shots, and his goal safeguards Sprague Cleghorn's statitistical infamy of being the only blueliner in team history to lead it in scoring in 1921-22, with 17 goals and 9 assists in 24 games. Kovalev has equalled Markov's 64 points and will surely surpass it in the final three games.

Overall, the Canadiens will need an even better effort this evening at Madison Square Garden against the Rangers. It's the game this season rests on, ultimately. The Blueshirts are playing inconsistant hockey of late and are deemed to be beatable.

The Canadiens can clinch a playoff berth tonight with an overtime loss in New York, as one point earned combined with a Panthers loss to Philadelphia would mean Florida could not surpass Montreal in the standings. A win puts the Canadiens in as they would be out of reach for the Rangers.

There are whispers being floated that the status of the injuries to Markov and Schneider are not as severe as reported. In fact the Canadiens have issued no statements as to type of injury nor their length. One rumour is said to have Schneider on the flight to New York and another has Markov able to start the playoffs, when and if. It is curious that the Canadiens have not clarified this further.

It will be interesting to see which moves Gainey makes to the lineup for tonight. It's hard to envision O'Byrne dressing as Gainey seemed to be quite furious with him from the bench after he received a double minor for cross checking. We may also see the return of Andrei Kostitsyn to the Plekanec line. Such a move would enable Chris Higgins to bolster the Habs fourth trio as the Rangers have equal line depth. It also wouldn't be surprising to see Carey Price make a return from being out with the flu. Halak has played well in his absence, but appeared weak on a pair of goals last night. 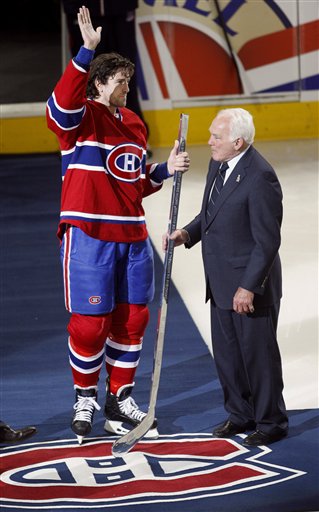 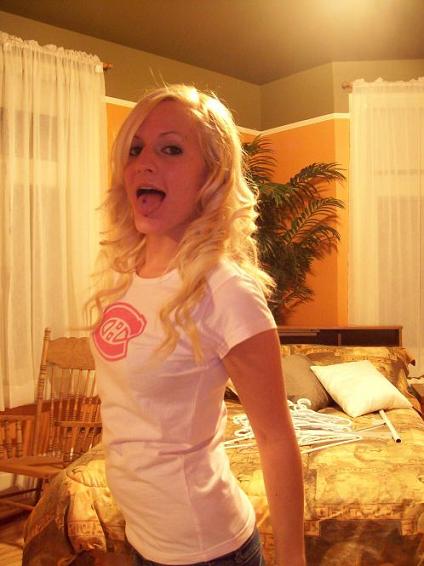 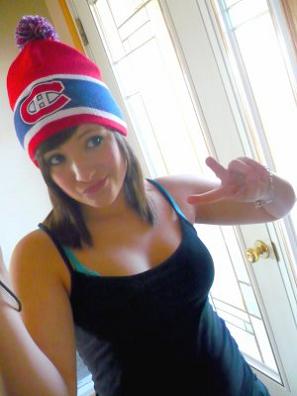