Share All sharing options for: Patrick Roy Speaks Out On Price's Mimic Of His Infamous Crowd Gesture 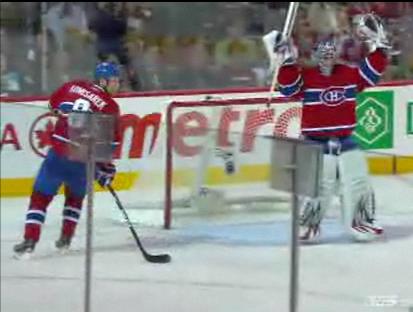 In the second period of Game 4 of the Canadiens / Bruins series, Montreal goaltender Carey Price, upon hearing the jeers of the crowd after a routine save, gestered back in mock derision, in a manner practically identical to Patrick Roy some 13 years prior, in his last game as a Canadien.

The sad sight, tended to make Price look no better than the disappointed fans who emptied their frustrations upon him.

The gesture - the final nail in the centennial coffin, as some have put it - reverberrated through the hockey world one day later, starting with a reaction from the salute's originator, Roy himself. 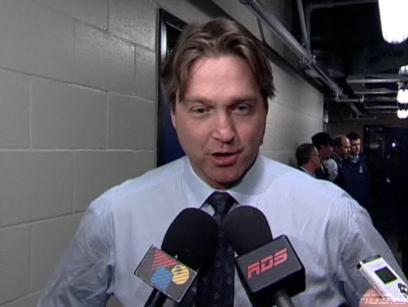 Roy, who was coaching his Quebec Remparts in the QMJHL playoffs at the time, did not witness the gesture, but when informed of it's details, has this to say:

"It wasn't the best gesture of my career, and I find it unfortunate for him, but it shows somehow that perhaps he hasn't had the support of the organization in terms of being as well surrounded as he should be. He made a mistake, and I think it shows that the team has to find a way to surround him better to assure that such a gesture doesn't repeat itself."

Roy backtracked over the term "support", when he spoke it, and clarified using the french noun "encadrement", which Google translates as "coaching, framing, and surrounding."

"The future of the Canadiens depends upon Carey Price, and it is in the hard times that we become better athletes. I think that he will grow up from the experience. If he begins next season with a strong start, I believe he'll be forgiven and people will get behind him again."

"The players are young are are being asked to perform at a very high level, and it isn't neccessarily easy."

"The gesture doesn't mean people don't like Carey Price. Just because they booed him, or jeered him, it means the fans were frustrated that night by the showing of the team."

"I just hope I'm not talking through my hat, because I haven't seen the gesture or the game, but that's what I think".

Here is a link to the RDS clip, with added commentary.

This post, and the other Carey Price related piece posted today, came to me via my good friend Ron P.

Ron, at different times, has been my friend in computer tech support, automobile mechanical advice, home repair, relationship perspective and hockey fandom. Everybody should have a friend like him. From doorknobs to hard drives to windshield wipers, Ron is always there to help out any friend any way he can. He's a brother of sorts, doing whatever is required to help anyone out out. Several people I know feel the same way about him.

Not only is he all of this to me, but on the occasions that I stop by his place, he often mentions my latest posts up here at EOTP, and he often gets me yapping about it to long lengths. When folks suggest that life is too short, Ron is a friend of mine that comes to mind, because I'll never have all the time I wish I could have, enjoying his company.

Ron is businessman, and a busy man. Ron and I are both busybodies who share an interest in the Canadiens. One of his involvements includes Oldtimer Hockey tours promotions, and he has gifted me more than once with the fruits of his labour. Whenever I drop by at his place, often unnanouced, not only does he find time for me, but my work at this website comes up, and he makes me feel an awful lot more important than I think I am.

Yesterday evening, Ron pointed me to the RDS clip you watched above. He was busy at the time - too busy to backtrack and find it, but he pointed me in all the right directions. I sought it out upon returning home, because as I friend, and as a Habs fan, I thought his searching for it, was something so essential, I should persue it.

What you are reading, viewing, and enjoying is all thanks to Ron. I hope you have a friend just like him.