Carey Price stands his ground, but Habs media ought to be ashamed

Share All sharing options for: Carey Price stands his ground, but Habs media ought to be ashamed 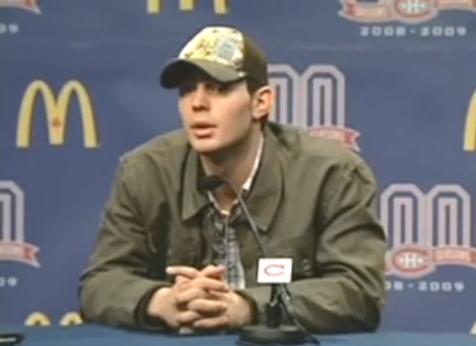 Carey Price, in the Canadiens season-ending press conference earlier in the day, admitted some regret while explaining his motives behind his gestured reaction to fans who had earlier jeered him.

"I made that particular gesture to remind people that booing doesn't always help. It was a way of expressing myself, they wanted to express themselves and I thought I would too."

The Canadiens goalie was asked about the ever-present pressure of playing in Montreal, and placed the question in terms of highs and lows.

"It seems since the Calder Cup and the World Juniors there have been high expectations on me. I'd like to meet them, but sometimes I'm not able to. Sometimes I think I'm put on too high a pedestal and get thrown under the bus too much."

Wearing a camouflage ball cap that hid his eyes during the seven-minute Q&A, Price often came across like a defiant-but-wounded soldier. He maintained that Montreal was a great place to play despite the bus tire tracks "when things aren't going well."

Here is a YouTube clip of his moments before the press corps.

Before I watched this clip from the live press conference at 4:30 PM, I was tuned into the RDS program "Le 4 a 7." Named after the hours in which the program runs, the host and guest did a number on Price before he even had a shot at explaining himself in the coming presser.

On the show, Alain "Le Baron" Chantelois, went on and on about a supposed YouTube video interview Price had done after the Game 1 loss to the Bruins. Baron shredded Price a good one, describing the clip shot immediately after the game with friends as being an immature display that demonstrated his complete lack of focus and seriousness.

Chantelois often has some intelligent observations to offer, and he has no shyness in putting some bite into his off-hand comments. On the flipside of the coin, I find him just another example of a misinformed, ignorant, and overzealous Quebec media type, often creating stories where there are none.

In this case, he can be accused of the worst type of irresponsible journalism there is: he is either guilty of a lack of research, or; he just flat out doesn't give a crap for facts.

Chantelois is the type of commenter notorious for cutting off fellow panelists in mid-sentence anytime they are about to contradict him or offer a wider, more balanced and relevant perspective into a subject. The loud mouth somehow has credibility in a Quebec media that ought to have less and less, especially after the rip job they've done on the Habs this year.

I'd love to be a Canadiens player right about now, because I'd go on every one of their shows, expose their blatant ignorance and lack of professionalism, tear them a second asshole and place it symmetrically on their foreheads.

Chantelois actually accidentally exposed his own ignorance in terms of the mentioned clip, by giving big time props to Quebec native Georges Laraque, for calling into question the behavior of several young players on the team who have been accused of immaturity and lack of seriousness at times.

Laraque has done squat all season in affecting the outcome of a single game, but in "Le Baron's" eyes, he has merit. Little wonder.

The YouTube clip of Price and friends that Chantelois speaks so venomously of, is actually a network television interview done by Cabbie of "Cabbie on the Street" fame, from the Score sports network.

Being that it is a post-game media interview, the Canadiens had to have given permission to the Score network to interview Price or any other players on the team, post game.

The clip, in which Price is loose and kidding around some, was widely circulated, and widely misunderstood after Game 1.

Chantelois takes all kinds of liberties in giving the gears to Price for making himself unavailable for interviews beyond the first game, and as he likely didn't see this clip, get the gist of it's contents, or even have it shown on Le 4 a 7, he is outright guilty of broadcasting nothing more than a whole lot of heresay.

You may have already seen this clip posted somewhere, as it is a week old now, but if you haven't, you might be surprised to learn that Price's friend in the clip is none other than Chantelois' boy Georges Laraque!

While I watched Le Baron rant off, I initially thought that he couldn't have meant this particular clip taken after Game 1, but this is all that exists of anything online that Price was involved in after Game 1. I did some research at YouTube. There are other YouTube clips there, where you could find Price with friends wearing different clothes, having a darker tan, a different haircut, 100 centennial cigarettes shoved between his lips, etc. Nothing fits Chantelois' empty rant.

In other words, "Baron" Chantelois spent five minutes talking about something that's essentially nonexistent, in order to drive a spike into Price for no good reason.

When his co-commentator tried to infer that Price was let down by teammates, Le Moron cut in at every chance.

This is what a 21-year-old gem of a prospect faces as an uphill battle to making it in Montreal.

If you think that such flagrant defiances of good moral conduct by media types in Habsland doesn't screw with a young kid's head while he's concentrating on trying to stop pucks, think about this.

Players are often accused of taking liberties on the ice, not earning their contracts.

You just might be reading about it from a journalist whose perilous livelihood depends on you buying into his lies and slants.