On Fans, Communication And Rivalry Respect

Share All sharing options for: On Fans, Communication And Rivalry Respect

I've had a whack of nasty e-mails from Bruins fans this week, along with a half dozen very complimentary ones that I'm quite proud of. The nasty ones were expected in part, as I'm sure I incurred most of them with the Lucic question post this week. The kind notes I've gotten, were totally unexpected, and they please me because it goes to prove that old notion that if you are respectful towards others (foes, especially) you are returned in kind. Treating others like this allows an opportunity to gain some clear insight into how other fans see the Habs, and it has led to some interesting discussion in the comments and back and forth e-mails. I think every reader is enriched by such a tone.

One thought occurred to me when I moved this site to SB Nation, and it concerned a fear I had that the comments section would greatly deteriorate into a fan bashing, anger driven cesspool, where all intelligent discussion would take a backseat. I've always been very pumped about the quality of my readership, much more than simple site visiting numbers. I was worried that a certain personal touch would be lost in the transition. With Yahoo, and now NHL.com directly linking to our blogs at SB Nation, I feared the worst at this time of the season.

It turns out my fears were unfounded, and I have regular readers and quality commentors to thank for it. You are too many to name, but those of you who enrich this site with astute observations and a respectful demeanor obviously help set the tone for others to follow. Every once in a while, I like to let the whole of you know how much it is appreciated.

It's a rough ride when our team is eliminated. Receiving letters such this one and kind notes from a regular such as Wamsley today, gets me through more than you can possibly know.

Jon H from Boston, had this to say:

Robert, I just wanted to let you know that you write a terrific blog, and one that all Habs fans are lucky to have. I’m a die-hard Bruins fan and season ticket holder, and have really enjoyed reading your blog throughout the playoffs. You are a great fan, with an unbelievable passion for the game and your team, and it shows in your writing. We are extremely lucky to be on opposite sides of the greatest rivalry in sports. I can’t tell you how much I look forward to Montreal coming to town every year. We’ve been lucky to have such a talented, confident team this year, and I know you will be back, and we will go at it again. You’ve done a great service to fans of the Montreal Canadiens with your work. There has been so much negativity about Montreal fans, with booing the anthem etc. I’ve shared many a postgame beer with Habs fans who are extremely gracious, and very knowledgeable about hockey. It is true. The best hockey fans are from Canada. Keep up the great work!

I beg to differ on just one minor point in Jon's note. Canada does not have a monopoly on the game's best fans, as he proves.

Also in my in - box today was this ad from NHL.com. I had to laugh. I thought the first discounted stuff would be the centennial gear! 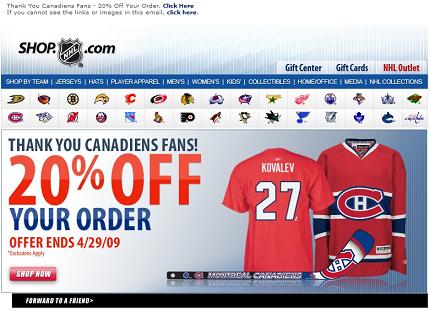