Some Tips For Canadiens Fans On The Eve Of Elimination

Share All sharing options for: Some Tips For Canadiens Fans On The Eve Of Elimination 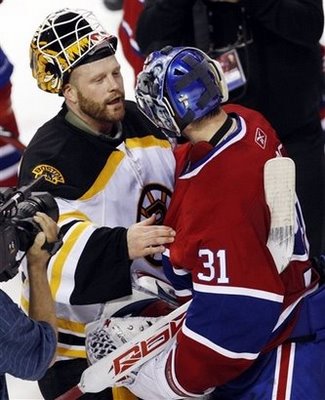 Just as Montreal is hosting the Boston Bruins in Game 4 tonight, fans of the team represent the city, province, and country. It is awfully embarrassing to all Canadiens fans when the coach and GM of the team needs to remind overzealous (read:idiotic) supporters that booing the anthem of the rival club is low class.

"I feel like there’s a confusion there with our fans. They feel like booing the anthem is supporting our team, in that the anthem represents the Boston team. I think if they could separate those two things, then we could respect the anthem of the United States of America and they could still participate loudly in whatever way they want to disrupt the Bruins."

Gainey could also have mentioned that there are several players on the team who are American, not to mention the team owner. Maybe you don't give a rodent's butt, but it doesn't hurt to try to be more civilized while on the losing side of things. It only serves to make you more respected when you win.

In the goal of putting a collective positive vibe behind the team and players - and everything associated with it - for one more night, I felt this somewhat tongue in cheek runoff of good manners would make for a fair starting point.

To begin with, as Gainey asks, don't boo or jeer the U.S. anthem at the Bell Centre. Not only does it make you look like a total jerk, it taints all fans, the team, the players, and your country. Most hockey fans understand that it is in fact just booing the rival team who are from America, but still, try to have some class and shut up for a whole minute. While it is only a few hundred doing so, it is heard loud and clear over the respectfully quiet fans and makes it sound like the whole building is doing it in derision. Save your energy to boo Chara, or better yet cheer on the home boys. Perhaps fans in the building upon hearing the boos, could drown them out with cheers instead.

Be courteous to Bruins fans when you encounter them at the Bell or in the streets, bars and restaurants, as we would all like to see them return next Sunday. After the game - even if it pains you - thank them for all the years of a great rivalry. It doesn't do much to them to throw stones, and we are learning that what goes round comes around. When they ask for directions to Chez Paree, don't send them to McDonald's.

Continuing on the booing note, it would be a real good time to lay off giving it to underperforming Canadiens players. Seventeen teams worth of free agents are sitting on the sidelines watching games, and that is the impression they will be given of Montreal and the fans. That's not even considering that there may be a bunch of our own we'd like back, and booing them or their team mates will be the lasting impression left in their minds. It's your right not to be pleased with performances, but if that's how you feel, silence can speak your peace. Coming down on players this way never improves them. If anything, it makes them worse. Boo the refs instead, if you need to let it out that badly.

If you happen to be sitting next to some a-hole mock cheering Carey Price, knock him out cold for the rest of game.

In losing, throwing the great history of the Habs in the faces of Bruins fans doesn't do much when we are about to become history ourself. They don't care about it at all. Show a little tact. We know history has been kinder to us. We don't surely don't need Bruins fans to acknowledge it, if they would at all. The best way to treat defeat remains acknowledging the winner respectfully. It's what you'd want someone else to do.

The Canadiens players will be giving it their all with their backs to the wall. Show as much respect for their efforts that you can muster. They appreciate it big time. Last season, when the team bowed out to the Flyers, the players raised their sticks to the fans from center ice in acknowledgement. If you are a fan of Kovalev or Koivu, give it up big time for them at the end of the game, as it might represent the final opportunity to do so.

Upon Bruins fans leaving the building if their team should win, wish them good luck. Killing foes with kindness disorients them badly. Be Jean Beliveau to their Mike Milbury!

No riots this time!