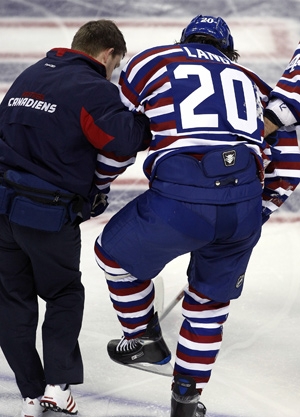 (Take this one with a lighthearted grain of salt - because the last thing on my mind here when writing this was being serious.)

What is beyond the ridiculous for this season, is that so much has fallen from the sky on the Canadiens this year, that fans and faithfull are at a loss for blame. To start pointing fingers is to run out of them. It would be an exercise in futility.

In speaking with many fans, there is no unified opinion on what went so wrong.

The Canadiens may not be as good as last season's team that took everyone by surprise, and the surely aren't as floundering as the club that looks like it will end their year with eight straight losses.

The worst part is truly not knowing what the reality is.

Injuries played a big role in decimating the club at the worst possible times. A coach was canned for no discernable reason while he had won five of his last seven games. Young players poised to step up and grab leadership roles took giant steps backwards. Off ice incidents and the sale of the team were media derived annoyances. A multitude of soon to be free agents likely didn't help smooth out all these rough spots. Burdensome expectations from a supposedly celebratory season gnawed as pressure built up to salvage respectability.

Makes you wonder if anything at all went right!

(And that folks, was the last serious sentence in this post. A little levity is now needed.)

I received a pleasant long distance call yesterday from British Columbia, from fellow Habs blogger Dennis Kane. The subject of just what the hell went wrong inevitably came up.

Whimsically - and because I didn't have a better precise response - I blamed it in part on the Hockey Gods and the superstition of the number 13. Dennis heartily laughed!

I thought about it afterwards, as it made about as much sense as anything else I could come up with.

Chris Higgins scored 12 goals, a big droppoff due to injuries. Had Andrei Markov added one more goal this season, instead of being injured with four games left, he would have scored 13 as well. The player who profited most from injuries was callup Matt D' Agostini, with 12 goals. Had all three scored one more goal, it would have given the Canadiens thirteen players with at least 13 goals.

The Hockey Gods - call them the old Forum Ghosts - are right pissed at the Habs for several reasons. Consider that they spent the summer of the centennial season chasing a former Maple Leafs captain to help bring them to the promised land.

The player in question - who wore number 13 - never came, thankfully, but the offseason saw Montreal lose a free agent to their Boston foe and trade another to the rival Leafs.

Few fans would moan the losses of Michael Ryder and Mikhail Grabovski, but where they ended up did come back to haunt.

That unlucky number 13 - not worn since 1921-22, when donned by spare parts Edmond Bouchard, Clement Piche and Billy Boucher, also haunted. No need to imply the Canadiens did not win the Cup that season.

While fate spared the Canadiens of Mats Sundin, the number 13 found it's way to affect the Canadiens two biggest off season acquisitions, Robert Lang - seen as a plan B to Sundin - and Alex Tanguay, who dared temp the fates by wearing the for all intents long retired unlucky number.

Tanguay suffered a severe shoulder injury in mid season, just when the Canadiens would have needed him most. Tanguay was the team's leading scorer at the time. The player who took the lead from him, Robert Lang, went down with a severed achilles tendon on February 1, wearing the jail bird replica jersey from the - you guessed it - the 1913 season.

Tanguay and Lang essentially replaced Ryder and Grabovski on the roster, and that is not without coincidence as well. Grabovski's harmless looking, but awkward hit on the Canadiens Andrei Markov did much to diminish the season's hopes. His absence came dreadfully close to costing the Canadiens a post season spot. Ryder, who had not scored against his former team during the regular season, netted the Game 3 winning goal, that crushed what hope remained that the Canadiens could get back into it.

Ryder scored that goal on Carey Price, a goalie many feel was all sorts of backwards this season. His number 31, is 13 backwards.

So the Canadiens messed with fate by having lost players to rivals and donning unlucky numbers. Maybe the ghosts and Gods are superstitious!

After a season of knuckleballs and screwballs, that sounds as logical as anything to me.

Next rationale, team mate ghosts of Emile Bouchard retaliate on the Habs from the heavens for allowing a suspected purse snatcher to wear his sweater number in sacrilege!