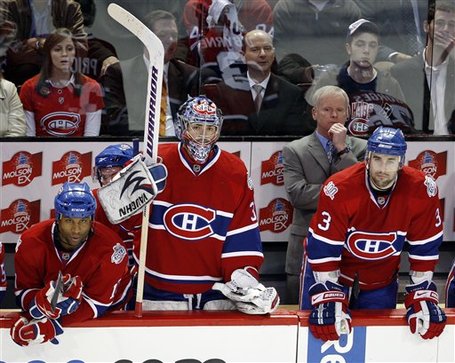 I wonder, when the proverbial fat lady sings, as she is about to in the Canadiens case, does she shed tears, because for the Habs, it is all over but for crying!

And that whine come Wednesday, just might be heard in many corners of the hockey world.

Me, I won't shed a tear - not that this wasn't a sad season - but it is just that I have seen promising hockey seasons go terribly awry before. I consider myself quite fortunate to have come from a generation of Habs fans that has witnessed multiple Stanley Cups. I understand that fans of lesser patience may not have.

Those who say history ain't worth a crumb, I beg to differ. In times like these, my history of being a fan of the team and seeing its glory days on ice, now acts as a buffer of solace, perhaps preventing me from irrational thoughts and angered lapses.

Now unless the Canadiens can summon the collective spirit of Glenn "Chico" Resch, Denis Potvin, Jude Drouin, Ed Westfall, Jean - Paul Parise, and the remainder of the 1975 New York Islanders team - the last bunch to come back from an 0-3 series crater - this edition of the Canadiens is cooked.

Game three's are always pivotal. It is the crucial middle point where clubs either break a one game deadlock or rise or fall from a 2-0 deficit. No one in their right mind could accuse the Canadiens of not knowing this. Everything was put on the line, by every player in the lineup for Game 3 against the Bruins.

As I sat down the watch last night, a sickening feeling of dread came over me. It was the kind of notion your gut senses, right before it gets punched. The dread came with the news that both Alex Tanguay and Mathieu Schneider were out of this game with injuries.

"Great", I thought, "Another obstacle!"

The subtraction of two key players from the lineup, at such a desperate moment was just more terrible news in a season that has seen no end to bad breaks.

The Canadiens rallied though. They played their hearts out and produced their best period of hockey in three games, while dominating the Bruins in the first period. Chris Higgins gave the Canadiens their only lead in a game at any point in the series, and a team of hobbled resources emptied itself going for more. It just wouldn't be nearly enough against a strong Bruins club.

As if to underline that things simply aren't in the cards for Montreal, the Bruins tied the game on a play you might see once in a season, a superb redirect of a puck was skilled and quickly done by Phil Kessel, that camera angles are still searching for it. From my split second POV, my guess is that Kessel deflected it from perhaps a foot of the ice or that he was simply lucky to have it deflect of his stick. Them's the break, and good team make them happen

As per the series norm, the Bruins then jumped ahead, but only this time, Montreal came back to tie on intelligent shot slipped through a maze by Yannick Weber, a bright spot on the night, and for the Canadiens in the future.

By this time in the game, Boston has completely adjusted, and clogged the neutral zone passing lanes so well, that Montreal began committing breakdowns in transitional play. With the Canadiens cheating coverage to make ground, the Bruins were well placed to pick apart Montreal errant passes and pounce on them. Not long after the Bruins had evened the shots on goals total, a goal by Michael Ryder did the Canadiens in. By the third, Montreal had little left in the tank and the Bruins were in full shut down mode.

To say the Habs had any glimmer of hope to begin with would be a gross exaggeration.

There's one more installment in this slow motion funeral, and then the obituaries will pour in, demanding the team be blow up from top to bottom.