Share All sharing options for: Is Milan Lucic The New Todd Bertuzzi? 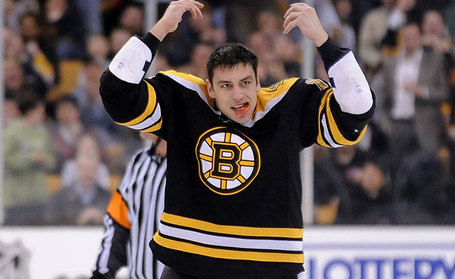 These words and terms, were once used to describe NHL badboy Todd Bertuzzi. Today, they could all be compliments used to describe Boston Bruins forward, Milan Lucic, a salivating hockey package that 29 other teams would love to own.

Like Bertuzzi, Lucic also has an unconscionable reckless streak about him, as evidenced by recent actions in three games these past few days against the Montreal Canadiens, the latest of which has earned him a one game suspension from NHL discipline head Colin Campbell.

Lucic's coach Claude Julien, in assessing his player's actions in light of the suspension, stated "If there's one thing I know, it certainly wasn't premeditated."

But exactly what would it not being premediated absolve?

Does a player not thinking of what he's is going to do in retaliation or retribution, make an ugly incident any more intelligent if he puts no thoughts at all into a reckless action?

Perhaps the officials and the NHL sensed a trend forming via Lucic's actions since April 8, when he mugged Canadiens defenseman Mike Komisarek from behind after being hit along the boards. The incident, which did not receive a suspension, was eerily similar to Bertuzzi's attack on Steve Moore of the Colorado Avalanche in 2004. 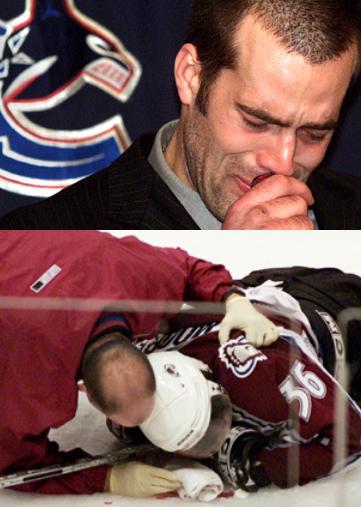 In hindsight, incidents from Bertuzzi's past perhaps showed a growing trend towards violent acts.

As a Midget player in a 1991 Ontario championship, Bertuzzi once chased after an opposing team's bus, punching and pounding on it's windows, while swearing uncontrollably. It was an anger management red flag if there ever was one. While playing junior in the OHL with the Guelph Storm, he was involved in a punch up with team mate Jeff O' Neill. In 1996, while with the New York Islanders, Bertuzzi punched linesman Jean Morin in a scuffle, earning a three game suspension. In October of 2001, he was handed a 10 game suspension for leaving the bench to fight Colorado's Scott Parker, already engaged with Canuck team mate Ed Jovanovski.

When adjectives such as loose cannon, irrational, reckless and accident waiting to happen slip alongside a list of hockey traits, a player becomes a time bomb of sorts. It's not like Bertuzzi's resume until jumping on Moore had few precedents, one just needs to look up the names of players Eddie Shore, Ace Bailey, Ted Green, Wayne Maki, Dan Maloney, Brian Glennie, Gary Suter, Dale Hunter and Marty McSorley to see how often violence and retribution hockey have put a black stain on the game.

But the NHL has long history of being intolerant to the acts of violent behavior leading up to more heightened and disgusting incidents. Not that it doesn't want to nip such things in the bud, but does have a tendency to sell tickets to games and increase interest and viewership.

Once, back in the late 1940's, upon an incident involving the Canadiens Maurice "Richard" Richard, Conn Smythe, the late general manager of the Toronto Maple Leafs once said, "We'd better stamp out this kind of stuff, or else people will keep buying tickets." People thought it was funny at the time, and that was before television.

Sarcasm nothwithstanding, the NHL historically hasn't stamped it out, and not long after Smythe's verbal nudge and wink, one of the most infamous incidents in hockey history - ending in the Richard Riots - put a dark cloud on the game. 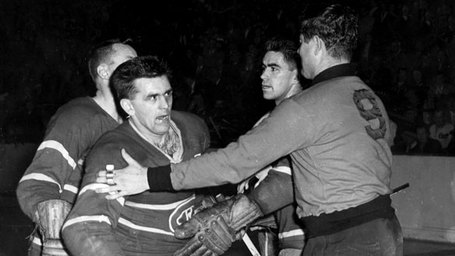 Maurice Richard, the Canadiens great goalscorer, had been minimally disciplined for a variety of incidents over the years, when he went ballistic after being cut by the stick of Bruins' defenseman Hal Laycoe. Badly restrained by officials, Richard went haywire on Laycoe before slugging a linesman in his path of wrath, earning a suspension that today only has Bertuzzi's regular season end and playoff ban as a parallel. In the aftermath, a large number of unruly fans the city of Montreal reacted as only they can, an induced an even uglier riotous response and stain on the game.

Richard, in all honesty, wracked up incidents even more severe than Bertuzzi's, as they more often had him pitted against the on ice authorities of the game itself. Had the NHL done a better job of controlling and muting the Rocket after those earlier incidents, perhaps the Richard Riot and the shenanigans leading up to it would have been defused.

That is perhaps the tack the NHL is taking with Lucic, upon seeing a trend in his recent series of fouls.

The incident with the Canadiens Maxim Lapierre this past Saturday was hardly the most flagrant foul ever committed by a player. It is even somewhat negligible that he injured Lapierre in any way. The cross check to the player's head in a face to face scuffle was perhaps even less punishable than the flying elbow he had delivered to the same Lapierre one game before, when coming to the aid of a team mate.

Lucic's scariest act, in fact happened back on April 8, in the Bruins last regular season game with the Canadiens. Upon being given a solid check along the boards by Montreal defenseman Mike Komisarek, Lucic, off balance, was sent flying. Getting to his feet, he seemed to lose his grip on common sense, and he attacked an unsuspecting Komisarek, who was by then exchanging shoves with Shawn Thornton, with a hooked clothesline from behind. In the brutal display, Komisarek was pulled backwards to the ice, and thankfully had his helmet's chin strap on tight, or his brains may have been hamburgh on a chilled surface. 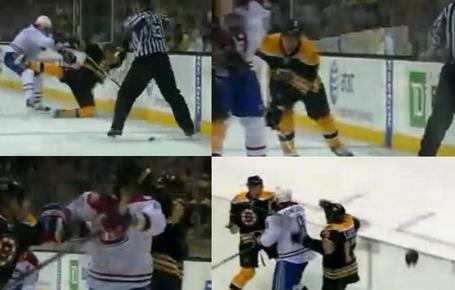 It was then remarked that Komisarek had been quite fortunate in his fall, and the first mentions of Bertuzzi's name in regards to the Lucic incident surfaced.

Lucic had regrets in the aftermath the following day. But as penalties to him almost cost his team a win, Lucic's regrets seemed limited to him having turned the tide against his club.

In ensuing games, the two incidents with Lapierre surely brought up the red flag with NHL headquarters, as it can ill afford an incident of Bertuzzi proportions during the highly viewed playoff time.

It was time to chill Lucic down, and hockey fans in general should breathe a collective sigh of relief.

Lucic's one game absence will hardly disable the Bruins from steamrolling the Canadiens, but it just may give the player some pause for thought next time he sees red and reacts instinctively. More than a team's momentum in a game might be at stake then, it may be a player's health and career.

It would be a true shame if a "Lucic Incident" were one day as easily Googled as the "Bertuzzi Incident" now is. Fans everywhere, especially in Boston, would much rather see his name scrawled on a silver cup instead of engraved in our collective thoughts regarding repulsive on ice retribution.