Share All sharing options for: 20 Quotes - Spillover From Habs Bruins Game One 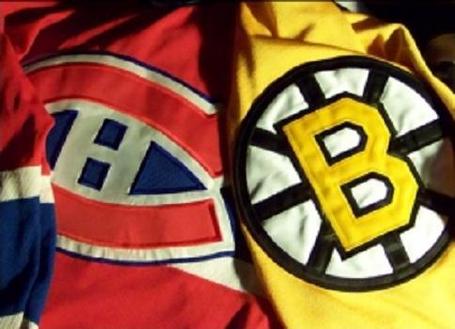 The reactions to incidents at the end of Game 1 have caused a ruckus that have reached all the way to discipline prefect Colin Campbell. They also got me into some pretty pathetic shenanigans with some readers.

This blogging business - especially when not hiding behind a pseudonym - can get very testy. More on that side of things after I drop today's grab bag of post game quotes.

Here's what I scooped up from the Gazette, Le Journal, La Presse, Rue Frontenac, RDS, CKAC and NHL.com.

- Colin Campbell, when asked about the incidents at the end of the Bruins and Canadiens game.

"Our team has to make strides toward complete games and more consistency in our play and drawing more players into the competition level that is required," Gainey said. "We can't do that in one jump. We do sometimes take note of small improvements and small changes and gather them in and recognize them."

- Bob Gainey, on his assessment of the team over the past few games.

"We didn't play our best game. We weren't as solid as I thought we'd be. I'm not sure why, but we came out flat in the second period. There's no doubt in my mind that the Canadiens dominated the second, but I'd rather focus on the positive side in this situation. I liked that we bounced back in the third."

"I’d like to see us be ahead rather than just catching up."

- Gainey, on the Canadiens comeback.

"I thought we played hard and we had some chances. I missed one on a power play."

- Alex Tanguay, on the work of his line

"This game should give us confidence."

"Kostopoulos tried to get involved, but he fights like a cat."

- Tim Thomas, who looks like Garfield, so he'd know, (but he's right!)

"I don't understand why Lapierre went after a guy who just scored into an empty net. He did nothing to deserve getting elbowed in the head like that."

- Thomas, who was 180 feet away from the incident. 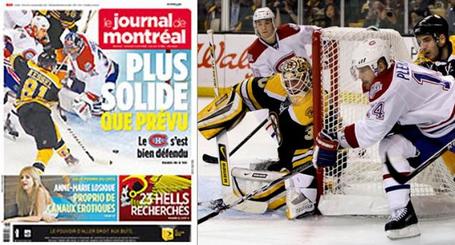 "Those who thought we didn't have a chance might have had their eyes opened. We can compete with them and I don't see why we can't win on Saturday."

- Tanguay, on measuring up.

"Things went well with Metro. He's a guy with a lot of intensity and drive. We could've scored a couple of goals that would have turned the game around. We're going to make a couple of adjustments. Saturday's game is primordial, and we have to come back to Montreal with the series tied."

- Tanguay, on his newest centerman.

"We know the rivalry and that the games will be tough. We did some good things, but we have to learn from our mistakes. Now, we have to get some wins."

- Glen Metropolit, on the here and now. 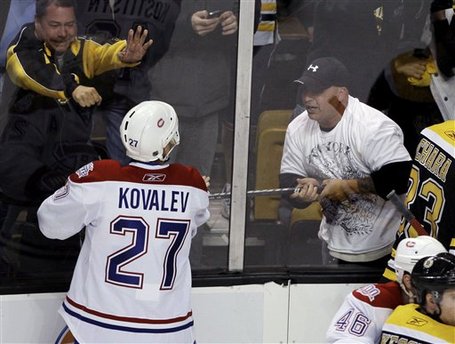 "He gave us the chance to be in the game in the third period by making some good stops, while being lucky on a couple of posts."

"We have a clearer vision of what needs to be done to get on the right side of the score come the third period."

"We got away from our game plan. We lost our concentration."

"I have to continue believing in myself, even if the situation isn't easy. When I'm hitting the bottom of the barrel, I'm finding that things can still get worse."

- Tomas Plekanec, speaking of rock bottom from a little girl's point of view.

"Plekanec has a difficult game Thursday. He had two penalties. If he says he's discouraged, then he needs to have a talk with himself. Plekanec is an experienced player, a professional who have been here a few years now. He has playoff experience. He's got to dig deep to find the answers. He works, and he's a good player. We're hoping that's the bottom of the barrel and that he'll rebound. We need him at center. He's our only option."

"We proved some good things tonight. We didn't quit when we fell behind 2-0 and we were up to the task physically. We showed a lot of guts and we weren't really intimidated. We had some good chances in the third period but a penalty cost us. We can beat this team."

- Georges Laraque, on not quitting, not being intimidated, and believing

"The Bruins were cycling the puck well and our guys had all collapsed near the net. I didn't really see it. But that's the name of the game - shoot and screen the goalie. And Chara's got quite a shot."

- Carey Price, on the game winning howitzer by Chara that he's still looking for

"We played a good game. It was a collective effort. Despite losing, we're still confident. If we continue to play this way, we'll have chances to win."

- Price, being as rhetorical as possible.

"Milan did exactly what he should be doing when he came to protect Kessel. I liked that our guys didn't get caught yp and remained disciplined in the game. They played a rugged game, but kept in between the whistles. It's normal that the Canadiens tried to get us out of our heads. Everyone was expecting us to react differently, but the guys kept their cool. In fact, both teams were disciplined. It's something that we put the accent on, something we worked on in last Thursday's game."

- Julien, on the games within the game.

Yesterday, there was some general displeasure with my take on things in the comments section of the game post that usually bounces off thick skin, but what rattled me were a handful of threatening e-mails - one quite pointed and racist - and a phone call that sounded like it came all the way from Beantown. Pretty heady stuff.

It's all good and fine to take issue with things I say in here, but when it gets personal, a line is crossed. I'm not going to mince words here - the police will be involved and this person will get their due. E-mails are traceable through IP addresses, and phone calls also leave tracks, and I have not hesitated to follow through on it.

I returned one e-mail from a particular person who claimed to live not far from me. This person stated they could find me without much trouble, and that they would "come down and kick my ass". Nice bravado! In my note back to them, I suggested a meeting place and time where "we could talk it over" and was taken up on it. Of course, the person never showed.

At this site, I say tons of things. I don't have any illusions that I will be agreed with on all or any of them, but they are mine and I have my right to express them. I'm like a TV channel, if you don't like it, don't tune in. Opinions are like assholes - everybody's got one. That doesn't mean your opinion has to make you one.

At this site, I take pride in that I am able for the most part to respond to a good slice of folks who take the time to share their constructive thoughts in the comments section. I put a lot of myself into my posts, going a little farther than just writing about the Canadiens. From expounding on some coaching experiences to the occasional pieces on kids hockey, I enjoy being able to round up a larger perspective than just offering a view on the Habs. Doing so has come back to me in several ways - personal meetings, heartfelt correspondence, phonecalls, and thumbs up comments on site - that readers appreciate such an extension. It's very motivational stuff all taken together.

To have such a part of myself compromised by some blatant idiots, is not something I will ever take lightly or take sitting down. In the bigger picture, it's a hell of a lot more important to me than anything that goes on between the Habs and Bruins, really.

For those who have no control on their rabid enthusiam for their teams this time of the year, keep a check on your emotions.

In the end it's just a game.